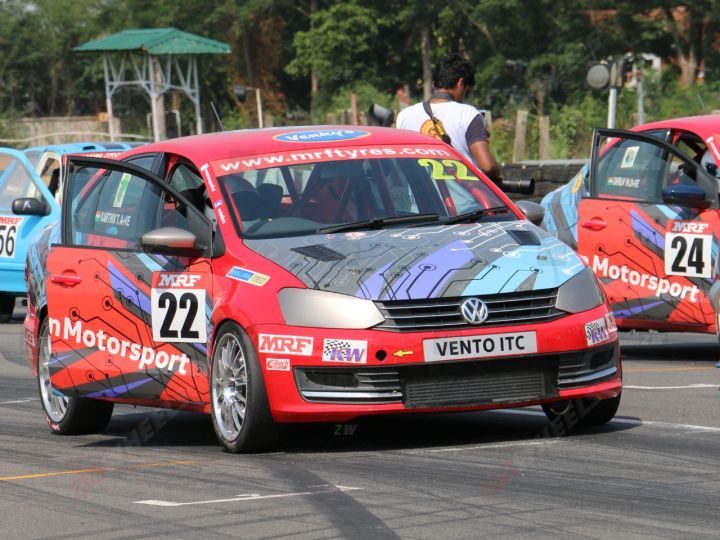 The 2019 edition of the MRF MMSC Indian Nation Touring Car race had just seen its grand finale. Team Volkswagen Motorsport, which had a lacklustre run in Round 3, came to the MMRT with the hope of taking the podium with their race-spec Vento ITC. They also brought in Daniel Rowe an international driver from South Africa, via the Driver Exchange program. Along with him was Dhruv Mohite and Karthik Tharani. Read on to know how the action unfolded.

Adrenaline was the perfect word to describe the moment when the sedans crossed the chequered flag. But let’s rewind to the start. A race that can be described as Japs vs Germans consisted of a handful of extremely modded Citys, Esteems vs three Vento ITC and an Ameo Cup car. Lined up on the grid were Arjun Balu's City with a heavily modified turbocharged engine, Arjun Narendran's Esteem, the Vento ITC cars with Daniel, Dhruv and Karthik, and the rest.

Arjun Balu had a brilliant start, but it only lasted a few corners as a technical glitch meant his Honda City was forced to retire. Incidentally, high temperatures on the track meant Arjun Narendran, who inherited the lead from Balu, also had a tyre burst. But instead of giving up, he decided to drive on. This lost him a few seconds and all the three Ventos managed to beat him, which meant the VW pack was leading the race.

However, Arjun was in no mood to give up. He played smart and managed to come second by beating Dhruv and Karthik using his superior corner speeds through the flowing MMRT. And then the excitement was pumped up as the old school Esteem was managing to catch up with Daniel’s Vento on the straights. In fact they were neck and neck and that made for some nail biting action. That said, the Vento was the ace in the corners and managed to pull away from the Esteem.

Final lap came and Arjun wasn’t going to give up. He tried to take on Daniel’s Vento by cutting his Esteem through the grass. His risky maneuver didn’t work and both Dhruv and Karthik took this opportunity to overtake him. But come to the last corner, Arjun managed to pull a whisker away from Karthik and finished third.

As we said earlier, adrenaline was the perfect word to describe this race. In fact, here’s how Arjun Narendran’s Esteem’s front right tyre looked when the dust settled. That’s some superhuman driving right there.

A technical glitch in Arjun Balu’s Honda City on the previous day meant he was unable to participate in the second race. Balu was expected to win this seasons’ ITC class.

Arjun Narendran was in no mood to give up on the second day as well. With the reverse grid in place, things didn't seem easy for Daniel, Dhruv and Arjun. But the racers didn't want to let it go. As I sipped my can of Red Bull, the green lights went off. To my surprise, Arjun, who was in seventh, managed to jump several positions ahead and by the end of the second lap, he was in the lead! From there he took charge and continued till the end to claim victory.

The action behind him was intense. The classic fight between JDMs and Germans continued as Dhruv, Karthik and Daniel weren’t ready to relinquish second, third and fourth spots. With the second spot held by D Vidhya Prakash for a while, Dhruv who was behind managed to cut him through the flowing corners of the MMRT. After a while Karthik did the same and the race continued cleanly till the end and team VW Motorsport gained the second and third spots in the ITC class race 2.

Hailing from Kolhapur, Dhruv Mohite was the championship winner for the 2019 ITC section. He is a three-time national go-karting title champion and the winner of the Volkswagen Ameo Cup last year.

Mohite said: “It feels great to win the Touring Cars championship. It has been a great
experience to race with some of the legends of Indian racing. My thanks to the
Volkswagen team for the support they provided and my championship win is due to
this wonderful team effort. So far, it has been a great journey for me, from karting to
the Ameo Cup, but winning the Touring Cars title tops it all.”

A Bit About The Volkswagen Vento ITC:

The Volkswagen Vento ITC started its life as a road-spec Vento before undergoing a handful of changes to make it a proper track monster. Most notably, in comes the 1.8-litre TSI engine from the Octavia TSI in an even higher 250PS tune. Sirish Vissa, head of VW Motorsport India, added that this motor develops around 350Nm and the torque curve is super spiky and the motor will retain the power even on 91 octane fuel. Mated to a 6-speed sequential gearbox, the Vento ITC sits on race-spec springs and 17-inch slicks. Braking duties are held by 330mm discs from the Golf at the front while the rear brakes are held by 220mm discs. A race-spec exhaust gives it the bark to go with the bite.

Sirish also added that many of the parts are from the VW bin and you can buy one for around Rs 45 lakh! But the Vento ITC isn’t road legal so yeah, you’ll need to park it in the race track, which means paying hefty rents each month.

And all of this makes us dream of a road-spec souped up Vento to keep us enthusiasts satisfied. But it looks like the dream will remain as it is.