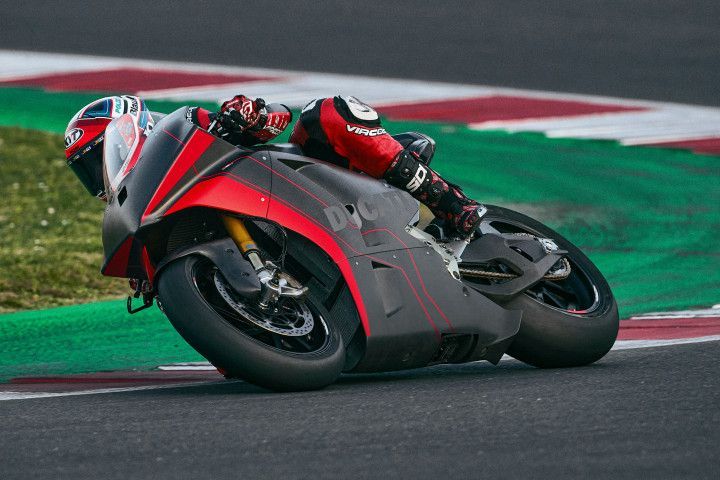 Ducati has pulled the wraps off the V21L, the Italian marque’s MotoE race bike, before taking the reins from Energica in the 2023 season. The electric track scorcher did its first round of testing at the Misano World circuit under the able hands of Ducati tester Michele Pirro

Ever since FIM announced Ducati as the official supplier for the MotoE championship, the world has had their doubts given the bike maker has been noncommittal about going electric. But with the bike out testing in just two months after the announcement, it looks like Ducati has been hard at work all along.

The specifications of the Ducati V21L aren’t out yet, but from what we can see, this bike means some serious business. Ducati’s biggest challenge in the development of this electric racing bike has been the size, weight and range of the batteries. And to deliver a high-performing, lightweight competition motorcycle, the brand has used top-notch components.

First off is the chassis, which appears to be a monocoque unit built using carbon fibre. Even the swingarm and Panigale-like subframe is constructed using the same material. Furthermore, the entire bodywork is also built with the same material. Interestingly, the bike’s design is clean, with no massive winglets, or disc cooling vents or underbelly spoilers.

On the mechanical front, the Ducati V21L seems to use a transversely-positioned motor positioned just below the swingarm pivot (for better mass centralisation). Ducati has credited the motors' consistent power delivery to its cooling system, which appears to be a liquid-cooled unit. Interestingly, there’s a smaller radiator at the bottom, which could possibly be a separate cooling system for the electronic control unit.

Now, to answer the big question– Will we see an electric Ducati soon? Well, though Borgo Panigale may not introduce a road-legal electric superbike anytime soon, it has stated that the V21L will definitely lay the foundation for one. But a Ducati minus all the mechanical symphony? We aren’t too sure if we’d want one.