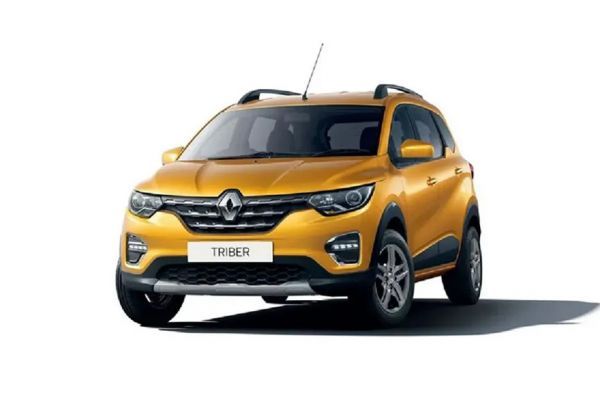 Renault Triber is a 7 seater muv car launched at a base price of Rs. 4.99 lakh in August 2019 by Renault in India. Triber is available in petrol engine only . Triber petrol is powered by 999cc engine claiming mileage of 20.5kmpl. Triber also comes with automatic transmission. It is available in 5 variants and 5 colours.

Renault India has launched the BS6-compliant Triber with prices between Rs 4.99 lakh and Rs 6.78 lakh (ex-showroom Delhi). Prices have been raised by Rs 4,000 to 15,000 depending on the variant. The carmaker says that the 1.0-litre engine makes the same 72PS of power and 96Nm of torque as before. Renault claims a fuel efficiency of 19kmpl after the BS6 updates.

For now, a manual transmission is the only gearbox option on the Triber. An AMT variant is expected at Auto Expo 2020.

The Renault Triber is the company's attempt at creating a disruption in the sub-4m car market. The Triber combines the spaciousness of an MPV, design of a crossover and feature-set similar to mid-spec hatchbacks like the Maruti Swift - with an expected aggressive price. First impressions of the Triber are positive, but we will have to wait till we get our hands on it for a drive and get a final idea on its price before giving a verdict.

It is available in four variants - the RXE, RXL, RXT and RXZ. Renault still haven't launched the AMT Easy-R variant of the Triber.

Renault is walking the fine line between MPV and SUV with the Triber. There's 182mm of ground clearance too, so it's not another small hatchback dolled up with cladding. The design is executed tastefully, and from no angle does it look ungainly. The face with the large Renault lozenge and chrome-dipped grille is in line with the baby Kwid. On the other hand, the rear with its large tail lamps is clean and minimalistic. In terms of size, it's half a size larger than the Swifts and i10s it goes up agains. It also doesn't look out of place when parked next to a Duster or a Nexon so it's not small either.

The Triber has erred more to the side of practicality than creature comforts. In terms of features on the inside you get a funky drivers information display, 8 inch touchscreen manual air conditioning, cooled central compartment and not much else. But in terms of practicality there's enough space for 6-7 adults, air con vents for all three rows and removing the third row frees up 625-litres of boot space.

Maruti Suzuki Ignis: It may be quirky, but it’s super fun. It’s got space, is comfortable and is the only one in the segment to offer an automatic transmission paired with a petrol and a diesel engine. It’s not the most affordable, but it’s definitely the most unique.

Maruti Suzuki Swift: The Swift’s value for money quotient, high efficiency and its fun to drive nature has made it immensely popular in the country. It has been topping the sales charts in its segment for years now and is a permanent member in the list of top 10 cars, in terms of sales in the country. But, we strongly wish the Swift offered better safety.

Hyundai Grand i10 : The mid-sized hatchback from Hyundai has been given a refresh to keep up with the Ignis. The Hyundai Grand i10 offers a premium interior feel, efficient but peppy diesel engine, fun to drive characteristics and class-leading interior space without burning a hole in your pocket.

Ford Figo : : Among the most value for money hatchbacks you can buy right now. Figo aces the core essentials of features, space and efficiency. Did we mention the diesel is super fun to drive?