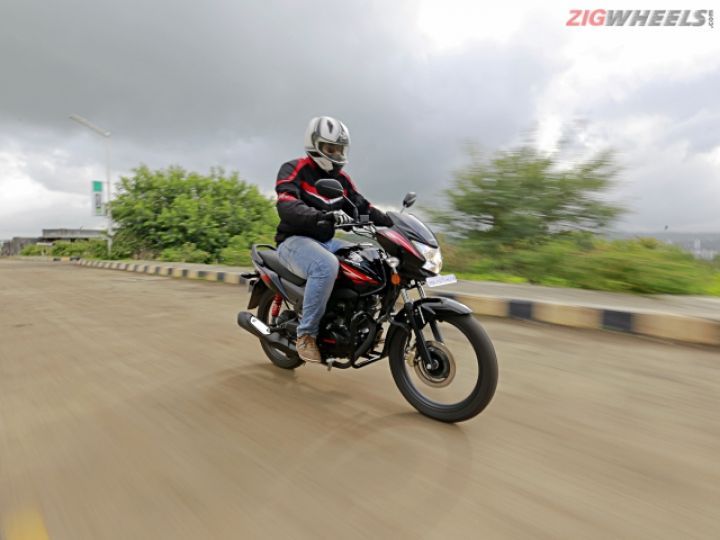 The SP in this Honda Shine’s name stands for Special. So, the Honda Shine SP is a premium version of a bike that has gained great popularity, dominating the 125cc motorcycle segment in India today. So let's find out what makes this premium commuter SP, okay, special.

In the looks department, the Shine SP looks similar to the standard Shine, only more appealing. Be it the headlight cowl with the black tinted visor or the fuel tank with neatly crafted knee recesses, Honda has recently taken to a sharper and sleeker design language. There is a sense of premiumness too, and you can see it in the PVC grab rails that are soft to the touch. The overall fit and finish are at par with the competition. The SP also gets a digital fuel, trip and odometer along with an analogue speedo, all of which is clearly visible on the move. The switchgear quality though could have been better. The colour for the engine start button looks dull and the indicator toggle wasn’t smooth in terms of operation.

The engine on the Shine SP is identical to the one on the standard CB Shine, showcasing a 124.7cc, air-cooled, four-stroke unit, with 10.3PS of maximum power delivered at 7500rpm, while peak torque of 10.3Nm is generated at 5500rpm. The engine feels refined in typical Honda manner but vibes on the footpegs, handlebar and levers are quite apparent  post 50kmph. Most of the buzz settles down as you cross 70kmph, but with noticeable vibrations still apparent on the handlebar even as you surpass 100kmph. The powerband is great for commuting as it has strong grunt in the low range, which means treading along in traffic in higher gears isn't much of a hassle either, but you would need to shift down a lot more often in order to overtake vehicles. This was also apparent from the roll-on figures we achieved, wherein the Honda took 8.20 seconds from 30-70kmph in 3rd gear, and 9.57s  to go from 40-80kmph in 4th gear, which are admirable figures from a 125cc motorcycle standpoint.

There is one vital update on the SP over the Shine, and that is the addition of a five-speed gearbox, whereas the standard Shine makes do with a four-speed ‘box. However, we found the shifts to be a bit troublesome, requiring a firm push to make sure they were slotted properly. As daily commutes get longer and include some high-speed commuting, the additional gear should make the SP more apt for the urban commute. During our test run, the SP managed a true top speed of 102.92kmph, so the fifth gear doesn’t increase top speed significantly and it only feels a bit more relaxed while cruising. However the gearing helps in terms of performance as 0-60kmph is achieved in 7.16 seconds. Beyond this, the timeline increases drastically as the SP takes 13.43 seconds to touch the 80kmph mark.

The standard CB Shine has always been admired for its manoeuvring and handling capabilities in peak hour traffic, and the SP version possesses similar attributes as you can ride out of tight spaces with ease. True to its commuter DNA, the Shine SP offers relaxed and upright seating posture on a long and wide seat that provides soft enough and comfortable padding, with sufficient room for both the rider and the pillion. The front telescopic and the hydraulic rear shocks are tuned to tackle broken roads while keeping the rider comfortable. However, as a result of this soft suspension setup, you also need to be aware of sudden and tricky potholes that may unsettle you by surprise.

The Honda Shine SP comes fitted with a 80/100-section rear tyre, which is similar to the CB Shine but skinnier than the one on the Bajaj Discover and the Hero Glamour. That said, the tyres on offer by MRF provide assuring grip under hard braking. Speaking of which, the 240mm disc brake up front, along with a 130mm rear drum brake, offers a strong bite as the SP screeches to a stop from 60kmph in 17.46 metres.

Is it heavy on the pocket?

We ran the Shine SP through our standardised fuel efficiency tests and it managed to offer 65kmpl in city riding conditions, where it felt relaxed. However, on the highway the engine felt stressed at 70kmph, despite the additional 5th gear, returning a lower mileage of 62kmpl.

Unlike the standard CB Shine that’s targeted towards people looking for a simple commuter bike, the Shine SP comes across as a motorcycle designed to attract a much younger audience. Yes, the Shine SP does attract a premium of almost Rs 5000 when compared to its closest competitor, the Hero Glamour. But what makes it worth the extra cash is the added safety net of CBS and a five-speed gearbox, which the other 125cc motorcycles miss out on.

The CB Shine has proved to be a money spinner for Honda and with the Shine SP, the company has managed to set a benchmark for the upcoming range of offerings in the 125cc market.