Bajaj’s second offering in its ‘V’ Series is a smaller 125cc commuter. Here’s what it feels like to ride 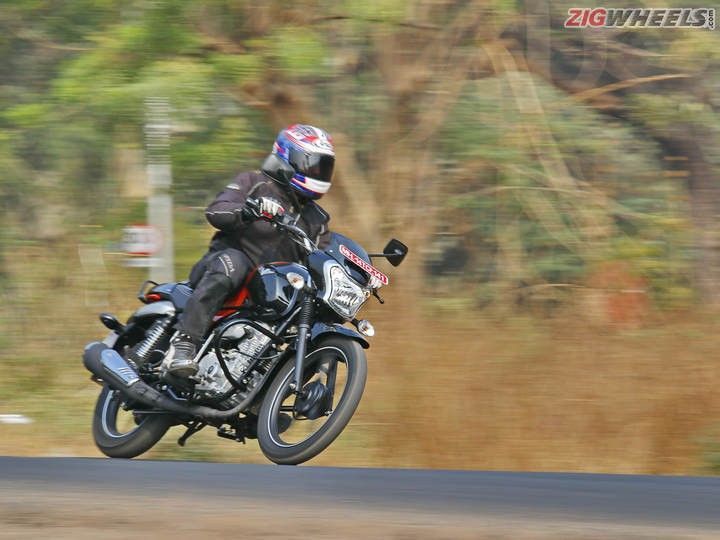 The 125cc segment has seen a bit of a lull over the past year or so. Bajaj Auto, though, has fired its first salvo for this year in the segment, in the form of the all-new V12. The V12 is the second motorcycle in the manufacturer’s V series, after the V15, and we know there will be more in the series. Bajaj says that just like the V15, the V12 also uses metal from the Indian Navy’s erstwhile aircraft carrier, the INS Vikrant, which was heading to the scrapyard after an illustrious career. The Pune-based bike manufacturer bought salvage rights to the decommissioned carrier in 1997, and launched the V15 last year. With the V15, Bajaj has found a patriotic connect with buyers, having sold around 20,000 units of the motorcycle since launch. Bajaj hopes to replicate the same success with the smaller V12 in the 125cc segment.

One of the V12’s biggest USPs is that it looks identical to the V15. In fact, the bike uses the V15’s chassis and bodywork with subtle differences. The tyres are new and slimmer, while the alloys have the same 5-spoke design though the spokes are thinner to save weight. The graphics get a similar pattern but get a different hue. The clocks are now an all-analogue affair, the V15’s digital fuel gauge making way for an analogue unit. The ignition key insert surround is now plastic instead of aluminium on the V15. Even the rear footrest holder is now a mild steel unit, as opposed to aluminium. The changes have helped reduce costs, without missing out on the premium feel of the bigger V15. The V12 also gets the same removable seat cowl for the pillion seat as the V15, which lends it a premium feel. The seat cowl is screwed onto the seat using the Allen key on the bike key, just like the V15.

The 125cc engine is a new one but not all-new, coming from the same family of engines as the V15. Bajaj has designed the motor from the ground up using some components from the V15. The 125cc motor also retains the same stroke as its elder sibling, but uses a smaller bore for a torquey feel, particularly at low speeds. The gearbox is the same as well, albeit with a shorter final drive ratio. The engine offers 10.7PS at 7500rpm and 11Nm at 5500rpm. So while the power output is on par with other 125s in the market, the V12’s torque output is higher. This is a good thing, as torque decides how quickly you get off the line and is an important factor for riding in city conditions. The bike sounds a bit different from regular 125s, and is in fact louder (in a nice way!) thanks to its large diameter exhaust exit.

Expectedly, the engine pulls cleanly from low speeds. The bike had no trouble pottering at 15-20kmph even in third gear, and rideability is good. The torquey feel from the engine is likeable, particularly at low revs, though delivery begins tapering off as revs go up. The engine feels refined though, and there’s barely any hint of vibration through most of the rev range. The bike tends to run out of breath near the 80kmph mark though, and clearly, the engine has been tuned to suit city conditions better. The five-speed transmission’s ratios are well suited to commuting as well. Clutch action at the lever is light, and shift feel from the gearbox is decent as well. Our seat time on the V12 was limited, but we can tell you that the bike feels apt for its job of a city slicker.

When we first rode the V15, we found the ride to be on the firmer side, though the issue has been addressed, and the newer lots of the V15 are known to offer a plusher ride. The feel has been accentuated in the V12, as its ride quality is likeable. Bajaj has revised spring rates at the rear in keeping with the segment, and the ride is more pliant. We tried riding the V12 on some rough roads, and it had no trouble gliding over uneven surfaces and broken roads. The suspension isn’t overly soft either, and even with an 80kg pillion onboard the rear end did not bottom out. What’s noteworthy is that this plush ride does not come at the cost of handling. The V12 feels stable around corners and does not wallow or lose its line. Credit for the confident feel also goes to the new MRF Zapper Kurve tyres that use a different tread pattern. They are skinnier than the V15’s tyres, but offered impressive grip.

The riding position isn’t your average commuter-esque position, and while you sit with your feet forward, the handlebar is wide and the reach to them short. As a result you have to extend your arms to reach the handlebar, which according to Bajaj has been intentional, for a more ‘robust’ stance. The seat is comfortable to sit on, and seat height is the lowest in class at 780mm, which means even shorter riders will have no trouble putting both feet down. The V12 currently gets drum brakes at both ends, though Bajaj tells us it does plan to offer a front disc brake as an option in future. Brakes offer a progressive feel with decent bite, particularly the front. Bajaj has not revealed fuel efficiency figures, which is a bit surprising considering that fuel efficiency is one of the biggest decision makers in the 125cc segment.

The V12 is priced at Rs 56,283 (ex-showroom, New Delhi), which is six thousand rupees less than the V15 that retails at Rs 62,312. The V12’s price is on on the higher side. In retrospect, the Honda Shine which is one of the more popular models of the segment is priced at Rs 55,799 and the Shine SP which comes with a 5-speed gearbox is priced at Rs 63,173. On the whole it is a nice motorcycle. The engine feels smooth and offers good grunt where needed, while the bike’s design makes it stand out from its competitors thanks to its robust styling. The bike is impressive in terms of its ride and handling as well, and is a well-rounded package. The biggest question of ‘kitna deti hai’ needs to be answered in this case though, and only a full road test will help us assess this new Bajaj on this all-important front.