The 2017 Hero Motocorp Glamour has been completely overhauled. Not just in terms of design, but also in the technology department. All at the same time, the 2017 HeroMotoCorp Glamour is familiar, sharp and modern. Does the experience in the saddle match up and justify the hefty price tag? 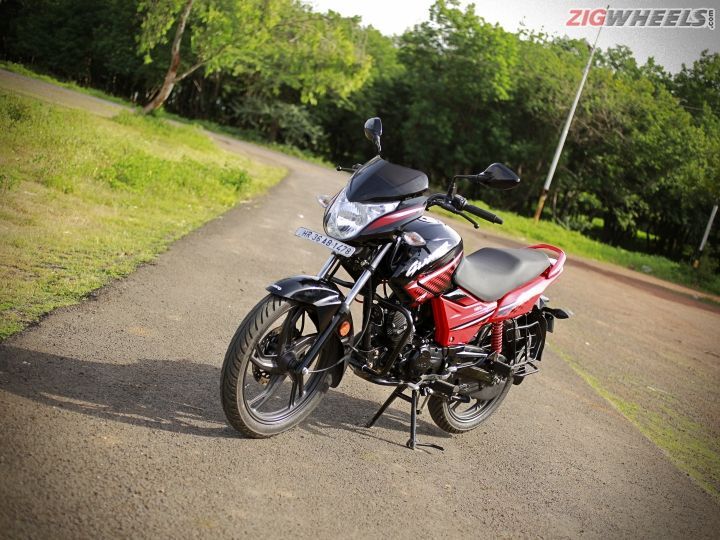 The Hero Glamour always had a flair of sportiness in the otherwise mundane 125cc space. The 2017 model further changes the game altogether with sharper looks and a fuel injection system. But the FI variant commands a hefty price tag, so we decided to find out if the asking price of Rs 69,177 (ex-showroom, Pune) can be justified. What did we learn? Let’s find out.

When you first set your eyes on the Glamour, it's hard to make out that it’s only a 125. The big front mask, the voluptuous tank, the cool graphics, the generously stepped seat and the stylized side panels show that more love has been showered on the Glamour than what is usually reserved for commuters.

Complementing the big bike feel further is the good paint finish, the split-spoke alloys and the checkered graphics that add a whizz of sportiness and break the mass of the bike.
But the rear section of the motorcycle looks a bit cluttered. In certain colours, like the one we had, there is too much red and black contrast, with the long exhaust, tyre hugger and the mudguard making the design look too busy. The saving grace here is the LED taillight which immediately grabs your attention.

All the panels on the motorcycle align neatly, and the overall build quality, while good, isn’t class leading. Fair warning: while the glossy finish for the exhaust heat shield looks good, it is a scratch magnet. Overall, the Glamour looks handsome, with a sleek and sporty flavour that will appeal to buyers who don’t want to fade into the background even while riding a sensible commuter.

As far as features are concerned, the Glamour gets a nice and big instrument cluster with a large analogue speedometer in the middle. The LCD unit has an orange backlit display that offers good visibility even at daytime. The digital display is fairly simple, with a fuel gauge, odo/trip meter and an instant fuel economy display, which we found a little difficult to put our faith in as it even claimed to return up to 199kmpl while coasting in the city! This is flanked by telltale lights on the left and a digital display on the right.

The switchgear here is simple, with an electric starter switch on the right and high/low beam, indicators, horn and dipper switch on the left. All switches fall nicely within the thumb’s reach and work with a sure click, without feeling rubbery. However, the overall quality of the switchgear fell a bit short of expectations, especially as the motorcycle looks so premium!

The 2017 Hero Glamour gets an all new motor. While the older one had a horizontal engine setup, this has a more upright layout like most modern bikes. The new 124.7cc motor makes 11.6PS of power at 7500rpm and 11Nm of torque at 6000rpm. As compared to the carburetted version, the FI system here bumps up the power marginally.

Ambling In The City

The Glamour, for the most part, is a great tool for dawdling around in the city. Power delivery feels beefy right from the low end of the band and continues to pull well even as the revs rise. The Glamour also uses short gear ratios and that means you can sit at 25kmph in 4th gear all day long, reducing the need to change gears. The light clutch further strengthens its case here. But, where it particularly shines is in the way it picks up speeds in between gears, making overtakes a breeze. It feels extremely peppy as it shoots from 30-70kmph in third gear in just 5.61seconds, considerably faster than its rivals. This is where having the FI system really makes a difference.

We did experience a hiccup as the Glamour stuttered a bit at low rpms, probably due an issue with the FI system. Fuel efficiency, at 61.32kmpl in the city, isn’t exactly class-leading but is adequate keeping the performance in mind. The engine feels really smooth and vibe free till about 55kmph, which will make most of your daily commutes a pleasant experience. All put together, the Glamour is a sweet ride as long as you stay within city borders.

Out On the Highways

On an open stretch, the Glamour manages to reach 60kmph from a standstill in 6.55 seconds. But, post 60kmph, the bike really runs out of steam as adding another 20kmph on the dial took 6.0 seconds, struggling further to achieve the true top speed of 101kmph. This is where a 5-speed gearbox would have really made a lot of positive impact. Not just in the way it would have cruised at higher speeds, but in improving the fuel economy as well. The Glamour managed 58.3kmpl in intercity travels, which isn't too impressive. We would also like to mention that the Glamour has a distinctive exhaust note. The unexpectedly strong bass will earn a lot of brownie points with someone looking for a commuter with character

Though the Glamour looks big, it still carries a conventional commuter stance. So you sit upright, with an easy reach to the upright bars and your feet placed slightly forwards. The high-set handlebars along with the lightweight steering aids in making quick directional changes. The bike feels light and is easy to manoeuvre in the city, and the short turning radius means you can make a u-turn almost anywhere. At city speeds, the 80-section front and 90-section rear offer fair amount of confidence to even let you have some fun.

The seat is long and wide and offers loads of space even with a pillion onboard. So if you are on the healthier side, the Glamour will take good care of you. The one thing which might make you uncomfortable while mile munching is the soft-cushioned seat. But if you are commuting for a short distance, this will act in your favour.

Get going on the Glamour and you forget that you are riding over broken roads. It even maintains its calm over larger undulations like speed breakers but tends to exhibit some vertical bounce. This nature is amplified further on higher speeds. But, by and large, the soft seat and the suspension work well to give you a bump-free and composed ride.

When it comes to the stopping part, the Glamour offers a strong bite with good feedback from both the front 240mm disc and the rear drum. In our tests, it came to a dead halt from 60kmph in 18.08metres, which is par for the course.

As a 125cc commuter, the Glamour does well. It looks handsome, is really comfortable and offers a good amount of confidence in the riding department. Especially in the city, save for the jitter at low speeds, it does a wonderful job. But, though the FI has made a good amount of difference in the way the bike picks up pace, it has done so at a significant price.

In Pune, the FI variant has an ex-showroom price of Rs 69,177, with the on-road cost going up to Rs 82,000! For this amount, you can easily trade up to 150cc bikes - like the Achiever from Hero’s own stable - and still save about four thousand rupees. Not to mention, if you still want the Glamour, the carburetted variant costs about Rs 8,000 less than the equivalent FI.

So, with the big bike look and the peppy city ride, the Glamour FI is clearly the sporty pick of the lot. But, in a segment dominated by its price, the capable Glamour FI’s price weighs down its sensible quotient rather heavily.