We’ve always looked at the Q5 as a jack-of-all-trade sort but Audi claims that it’s now the ‘perfect Q’. What is the perfect quattro then, and just how much has the new Q5 changed? 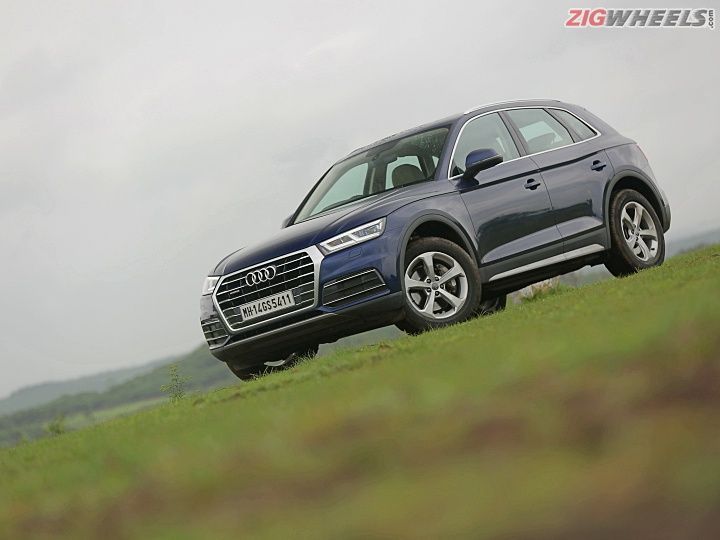 All new look?
Based on the new MLB Evo platform, the new Audi Q5 is lighter than before and also inherits the new, sharper family lines from the Q7 and Q3. It actually looks a lot like the Q7 head-on or when following it from a distance, but the profile does have a subtle and unique little curve to the accent line where it runs over its haunches. It’s unmistakably Audi  on the outside, with all the distinctive Audi-esque features like the large hexagonal grill and unmistakable four-ringed logo present. On the whole it has moved forward from the aging rounded look of the outgoing model.

Audi has also simplified the Q5’s engine lineup to just two powerplant options for now, with a 190PS 2.0-litre diesel and a 252PS 2.0-litre petrol as your only options. For this review we only had the 2.0 diesel available to test.

On the inside
The interiors have also received a refresh with a new 7-inch infotainment screen and an excellent driver information screen with multiple layouts and options to customise the display. The drivers screen is really a delight to use with its multiple layout options and the ability to highlight something like navigation, and you really don’t need to move your eyes far from the road to see where you need to go. The addition of a wireless charging station is a nice touch which keeps the dash area wire-free.

One oddity was the lack of information on the Media section of the infotainment screen, which only displayed the track being played at the top of the screen, with the rest of the 7-inch screen blank, and this felt a little unimaginative. The sound quality is nothing to write home about either. Another surprise is that Audi didn’t carry forward some interior design cues from the family, like the extended air vents from the new Q7 and A4 or even the quirky circular vents from the A3. Rather, they’ve gone with a more generic layout that really is quite similar to the BMW X3 that it competes with.

The new platform has also brought a 34mm longer wheelbase that has allowed a little more room for rear passengers. And, just like the X3, the rear bench can recline here too. But it really feels like an afterthought as it reclines just a few degrees and hardly changes the seating position at all. The seats are nice and supportive but the rather high transmission tunnel means that though there is the shoulder room for three, your centre passenger will be uncomfortable. You can read our BMW road test review here to see how this is different in the 2018 BMW X3 xDrive d20d.

Performance
The 190PS 2.0-litre turbocharged four-pot motor is the same unit you will find under the hood of both the A4 and the A6, paired to a 7-speed DSG transmission that can send power to all four wheels. Is it big enough to power a full-sized, near-two-tonne crossover SUV? It most certainly is. It’s refined, quiet, and its 400Nm of torque is delivered from as low as 1750rpm. This makes it a smooth drive around town where the engine mostly stays below 2000rpm, but there’s still sufficient power and torque to keep the pedal responsive. The dual-clutch gearbox is also slick-shifting and you rarely need to reach for the paddle shifts to get the gearbox to do your bidding, save for down shifting into a corner, which you can see much before the electronic wizardry can anticipate it.

It’s a much more tractable driving experience than the similarly specced BMW X3 motor is in the city and similarly punchy when you push pedal to the metal. In a race to 100kmph the Q5 crossed the tonne in 8.37s in our tests, which was just a hair off the X3’s time of 8.25s.

Audi has equipped the Q5 with a drivetrain disconnect feature to help improve cruising efficiency but the tall ratios mean that it only shifts in 7th gear at around 100kmph, and considering that our tests are conducted in real world conditions it wasn’t always possible to remain in top gear on the highway run. That said it still returned 16.11kmpl out on the highway and 12.29kmpl in the city cycle, which is pretty much par for the course.

Dynamic abilities
The outgoing model had one of the most comfortable suspension setups of the Q range, with the ability to just waft over broken roads and take a beating when needed, but it did lose out a little when you wanted it to go around corners. The new Q5 now features Adaptive Damping as standard. This allows you to change between ‘Dynamic’ or ‘Comfort’ settings or allow the software to decide which mode is suitable in Auto mode based on road conditions. The difference between the two modes is quite noticeable, with Comfort quite nicely absorbing whatever Pune’s rain-riddled roads had to throw its way. It’s not quite as coddling as the old setup was, though.

In terms of going around corners the “perfect Q” is better off than before in Dynamic mode. Roll around corners is more controlled and the handling is predictable. But the feedback from the main controls still let the Audi down, both in terms of the steering and brakes. They both feel too ‘electronic’ and so you never can quite tell what’s happening and this holds the enthusiast back a little.

Perfect?
The Q5 has taken a lot of steps forward. It’s lighter, more powerful and efficient and the added space to the second row is a welcome addition. The tractability of the Audi 2.0-litre diesel paired with the DSG gearbox has always been a strong point of the Audi and that still holds true with the new Q5.

The only chink in the Q5’s armor seems to be its price. At an asking price of Rs 59.79 lakh for this 35 TDI Technology it’s over three lakh dearer than a similarly specced X3, which boasts practically all the same features and is a more thrilling SUV to drive. So then it’s not quite the perfect package that Audi wishes it to be. Is it still the Jack-of-all-trades that it used to be? Most definitely, and that was never a bad thing.