As the more practical and sensible fifth-gen Honda CR-V steps into India, we spend some time with the crossover to see whether it’s brought the CR-V spunk back too. 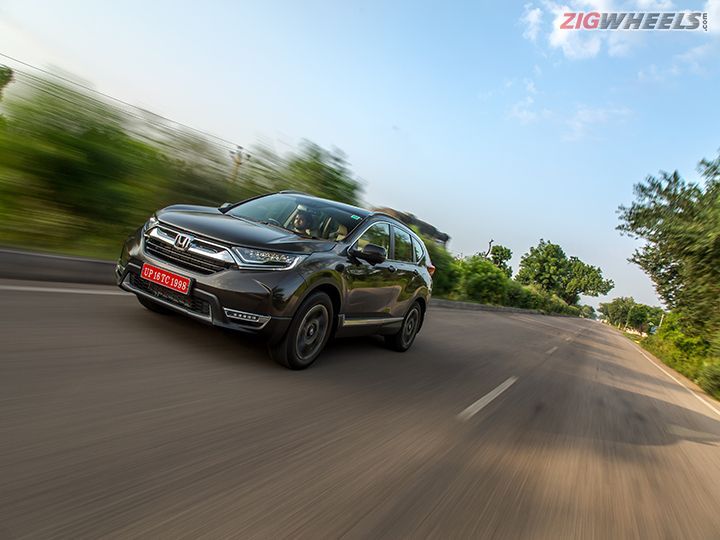 Desirable, sporty and cool, Honda hopes their new CR-V can be all of that once more. After the bland and built-to-a-cost fourth-gen CR-V, Honda really needs to raise the lip-smacking factor. But, to be a success Honda has also packed the new CR-V with the sensibility of diesel power and seven seats. Just how much of a step up is it and can it out-wow the competition from Poland, Germany, and Korea? ZigWheels took a close hard look at the feel-good and fun-to-drive quotient to know where the CR-V is headed.

You sure that’s the new one?

You don't realise it but you are paying Honda’s designers a compliment in some ways. That’s because the new CR-V is bigger - longer (by 47mm) and wider (by 35mm), and its wheelbase has also been stretched (by 40mm) to accommodate the third row of seats. But we get your point -- barring the rear, the new CR-V doesn’t look very different from the outgoing one. But in the flesh, you will feel it is more assertive and confident. The all-LED headlamps give it a more technical look, the ridges on the hood are more pronounced and add muscle, as do the more squared-off wheel arches. The space there is now occupied by 18”alloy wheels, which are a size larger, and wear wider rubber when compared to the outgoing car.

From the side the CR-V looks the same, but the chrome accents on more generous black cladding is new and makes the CR-V seem more rugged too. When you move to the rear, the L-shaped tail lamps immediately grab your attention. They flow down from the spoiler, swirling at the waist line before flowing onto the large tailgate. Overall, the new CR-V looks toned and ready, like a gymnast. So it will command admiring glances, but don’t expect it to bully traffic out of its way like some bulked-up powerlifter.

Impressive! For starters, we aren’t going to complain about quality this time around. There is a sense of Euro premiumness to the CR-V, which means its design is understated and has an air of quality. The faux wood trim on the door pads, the grain of the leather and the simple piano black strip that streaks across the dash are subtle but handsome touches. The ivory leather for the seats and door pads is an India-specific change and makes the cabin feel a bit brighter.

To add some sci-fi feel the gear lever has been replaced by buttons on the diesels, making the cabin seem more futuristic and clean. The driver is also treated to a 7-inch digital display that provides easy-to-read info on the go. The centre console also has a seven-inch display for the infotainment system that helps clear the dash of clutter as some of the controls for the air-con are integrated into the system.

This being a Honda, it is practical and also has an air of quality, durability and practicality. The storage bin between the front seats shouts of typical Honda thoughtfulness, as the sliding tray for phones can be moved around to create three different configurations. On the topic of space, the front seat passengers are treated very well, be they tall or wide! The generous front seats put them at ease further.

You have a couple of things to grumble about in the second row, for instance the lack of under-thigh support. The bigger reason to grumble would be the lack of headroom in the diesels as the roof-mounted air-con vents for the third row eat into the headroom. This, however, isn’t an issue with the petrol CR-V as it is offered only as a 5-seater.

As for the third row, these seats are best reserved for younger children as legroom and headroom are tight. The sliding second row helps open up space, but even then, accommodating anyone over 5’6” would be a squeeze. Luggage space is also lower in the diesel as the seats do not fold flush into the floor. However, the height-adjustable floor helps get a level floor when stowing luggage.

Very! And, it’s all standard as Honda is offering the CR-V in just one trim. Which means you get six airbags, ABS with EBD, Vehicle Stability Assist, ISOFIX seat mounts, Driver Attention Monitor (warns the driver if he is sleepy) and motion-adaptive electric steering (improves stability in case you slip up). The LaneWatch system deserves a special mention as it directs a camera feed from the passenger-side ORVM to the infotainment screen, thereby providing a convenient way to check for vehicles in the next lane. This significantly reduces the amount of time a driver looks away from the road, and hence improves safety.

It isn’t lacking creature comforts either! The driver gets an 8-way power adjustable seat and a two-zone climate control too. Interestingly, the CR-V we get in India features updated steering-mounted controls as Honda has done away with the touch-sensitive volume control, since customers complained about its erratic operation. The 7” display for the driver can toggle between trip computers, infotainment screens and also has a super cool real time torque distribution monitor that shows how much torque is being sent to each axle.

The 7” infotainment screen also packs in Android Auto and Apple CarPlay; however, the slickness and snappiness of the interface isn’t quite upto the mark. In terms of audio hardware you get four speakers and two tweeters to pipe out good quality audio. For the second row the CR-V offers two 2.5 Amp USB ports. The petrol CR-V gets easy to use single-pull handles in the boot to flip the second row forward. However, in the three-row CR-V you need to tug and heave a bit more to fold the second row. The last row occupants miss out on charging points altogether, but there are cup holders and stowage boxes on offer. Also, powered tailgate opening is not offered on the Indian CR-V.

Aye, aye! The CR-V has two options to choose from. You have diesel power with all-wheel drive, or two-wheel drive and a petrol engine that is only available as a front-wheel drive. Diesel power, available for the very first time on a CR-V, is courtesy of the 1.6-litre turbocharged i-DTEC EarthDreams engine. While the size of the engine and its 120PS of power and 300Nm of torque are lower than the competition, the 9-speed automatic bridges the gap. Be it for commuting or or cruising on the highway, the CR-V diesel capable and relaxed. However, if you hurry it, the gearbox, related to the ZF unit used in the Range Rover Evoque, feels a bit slower than you’d expect it to respond.

Paddles on the steering give you more control, but even then, for hurried drives or for overtaking moves with a full load, more power wouldn’t be amiss. So, if you want a more spirited experience, you might want to look at the two-wheel drive variant. The front-wheel-drive-only diesel feels quite lively. No doubt, it is helped by a lighter kerb weight ( by 59kg) and a more immediate connect to the front wheels. It also offers a bit more in terms of fuel efficiency, 19.5kpl to the AWD’s 18.3kpl as claimed by Honda.

The 154PS petrol offers the lusty pull you expect from a Honda, and builds a bit of steam as it nears the 6600rpm redline. The CVT makes sure acceleration is strong, but takes out the drama that gear changes bring to the experience. Paddle-shifters would have helped add some zing here. The petrol also makes for a great city commuter thanks to its smooth engine and gearbox combination. Interestingly, Honda claim that fuel efficiency is now 14.4kpl, higher than before.

There are no two ways about it, the all-wheel drive is brilliant to throw around some corners. Despite having gotten bigger and heavier, and being weighed down with a diesel powerplant, you get the agility that you expect from a CR-V. The all-wheel drive system is said to be more responsive now and can send as much as 100 per cent of the torque to either axle when required. Then there is the torque-vectoring, which makes the CR-V turn almost impossibly well, even on loose surfaces! The trusty steering wheel also deserves credit as it instructs the front wheels to do exactly as desired. The two-wheel drive versions also offer plenty of eagerness, but try to turn as late as the AWD and you’ll push into understeer. Thankfully, the electronics keep everything tidy even in those conditions.

The CR-V has grown bigger overall to accommodate a third row of seats, but along with that it has stretched the wheelbase and widened the track for a stronger footprint. That aside the fifth-generation CR-V also uses 235/60 R18 tyres that are a size bigger than before.

Its cabin is fun too, and calm and relaxing to be in, for instance in the way it cuts out the noise outside on Indian roads. Simply, the CR-V just glides over bad patches. At highway speeds, broken sections seem to melt away and big bumps are padded over gracefully. With 208mm ground clearance for the AWD and 198mm for the front-wheel drive it is ready for real India too. It is only at lower city speeds that some stiffness can be felt over broken roads.

Honda’s new CR-V is managing to strike a more sensible and more appealing tone at the same time. Sure, it isn’t perfect -- its underwhelming horsepower figure on the diesel and strictly-for-children third row are slight dampeners -- but you realise that there is a lot to like about this urban SUV. So, depending on what you want from your sophisticated and urban SUV, here’s how you can pick between them.

If you want a CR-V that handles, the diesel AWD would be the one to go for. As a taller occupant intending to spend time in the backseat the added headroom of the petrol CR-V would be welcome. And if you want the peppiest pick, the diesel 2WD would be the right fit. All these variants offer you a premium in-cabin experience and a rather extensive feature list too. Prices for the CR-V will be announced in the second week of October, and if priced in the Rs 26 lakh - 28 lakh range, would make this Honda a very tempting pick once again.