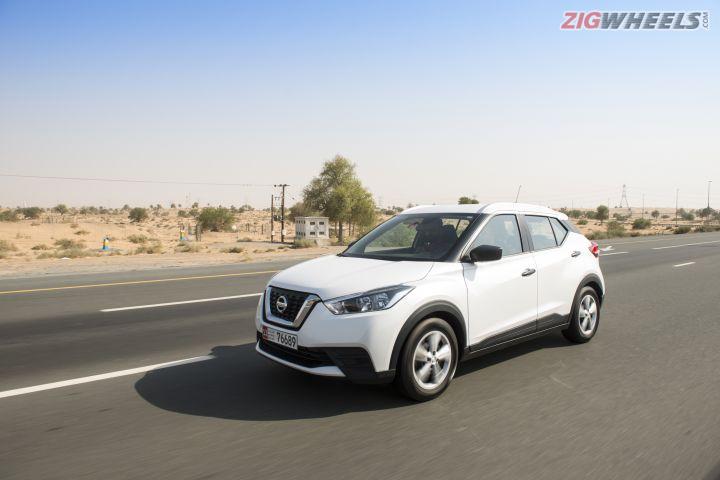 In a city where every second car is an SUV, every fourth SUV you see in Dubai is a Nissan Patrol. This statement just underlines how important a market the UAE is for Nissan and it’s the reason it chose Dubai as the city to showcase its SUV lineup and more specifically to India - the Nissan Kicks compact crossover.

In a sketch accompanied by a press release received just days before we headed to Dubai, Nissan also revealed that the Kicks will see quite a few significant changes before it makes its India debut and so this drive experience of the International-spec version should serve only as a flavour profile of what we can expect, not the finished product. We don’t have any specifics, but the India-spec Kicks is expected to be wider, longer and most likely based on a version of the B0 platform that underpins the Captur, Duster and the Terrano, rather than the current V-platform from the Micra and the Sunny.

But first, let's take a look at what the International-spec version has to offer. First impressions are that the Kicks is a compact car. It sits low to the ground and looks more like a hopped up hatchback like the Freestyle or the i20 Active rather than the taller Hyundai Creta. With an overall length of 4295mm (which is a tad longer than the 4270mm Creta), space on the inside is quite generous. There’s excellent knee room available for rear seat passengers even with a 5’10” person in the driver's seat. And this still allows for a 432-litre boot which will easily swallow a weekend's worth of luggage for all passengers.

The interiors are also well designed with a good spread of soft touch plastics in all the areas you’ll come in contact with. The layout of the dash and the controls is simple and effective with a twin-pod dials surrounding a digital MID. And while our mid-spec variant test cars only featured a monotone display for the infotainment, the top-spec SL variants come with a touchscreen that fits in the same space. For India, we expect this to replaced with an even larger touchscreen unit with Apple CarPlay and Android Auto. The flat-bottom steering is adjustable for both reach and height which is nice and the driving position is set quite high too. So, you also feel that you’re sitting in an SUV even if you’re not really that high off the ground.

The Kicks we drove was powered by a 1.6-litre petrol motor making 120PS and 149Nm combined with a CVT transmission that drives the front wheels. It was quite refined and quiet at idle. This petrol and CVT combination is tuned nicely for city driveability with near instant forward acceleration at part throttle and only a slight rubberband effect when the pedal was pushed to the floor. It was happy both keeping up with traffic on the highway and the stop and go rush hour traffic of Dubai as well. For India, we expect power to come from the trusty 1.5-litre diesel K9K dCi and the 1.5-litre H4K petrol petrol that do duty in the Terrano, Duster, Sunny and the Lodgy. These make 110PS and 106PS respectively and should have no problem hauling around the new Kicks as well.

The International-spec Kicks handles more like a car than an SUV though. It’s nimble around town with a light steering and controls, making handling stop and start traffic a breeze. The roads around Dubai are just so well surfaced that it’s really hard to tell how the Kicks would handle Indian roads but that matters little since we expect a completely different setup for India. What we hope for, is that Nissan can find a nice comfortable city focused ride quality that will give the Kicks a great platform to compete with the Hyundai Creta.

The top of the line SL versions come with auto headlamps, 17-inch alloy wheels, 7-inch touchscreen, 7-inch digital instrument cluster, climate control, tyre pressure monitoring system, 6 airbags, traction control and a vehicle dynamic control. What the last feature does, is it cleverly uses the brakes to maintain vehicle stability over tricky surfaces and dynamic driving conditions. We expect that the Nissan Kicks will feature an even longer features list and premium interior experience and if it plans to steal any sales from the Creta.

Getting in the ring with the likes of the Hyundai Creta is not going to be an easy task. Hyundai has really managed to establish its dominance in this space over the years. From our short experience with the Nissan Kicks, we can say that it’s got all the right ingredients in place. It’s just a matter of Nissan putting the finishing touches on it before it hits Indian showrooms in 2019.