The most affordable Mercedes in the country is the A Class Limo. Does the smallest Merc live up to this big promise? 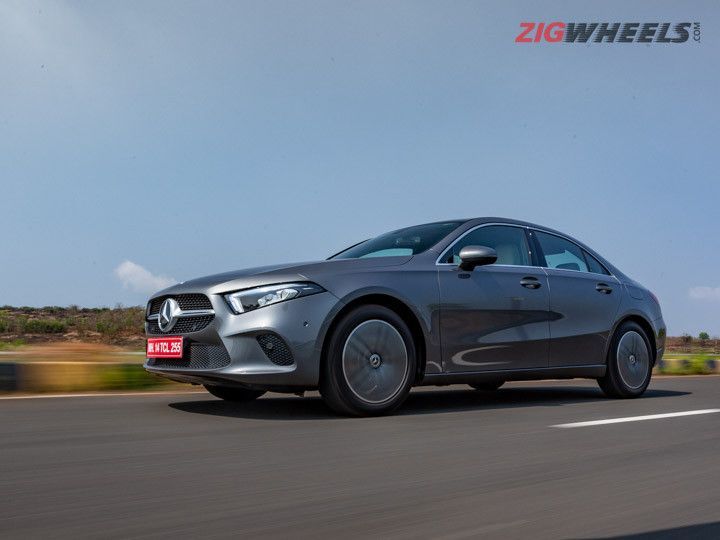 Mercedes’ millennials, the first of the new generation built on the second generation Modular Front-wheel Architecture has finally made its way to Indian shores in the form of the A-Class. Mercedes calls it the A-Class Limo, but the colour of the lenses over my eyes aren’t quite as rosy, so I prefer calling it a sedan. But could the A-Class Limo really be considered as a chauffeur-driven option? But if the youngest car to wear the three-pointed star proved to be an entertaining and alluring companion from the driver’s seat, would the rest matter? Well, only one way to find out.

The new Mercedes look, typified by the stubby, slashed headlamps, is something that we are still getting used to. However, one thing is clear from the get-go: the A-Class Limo is a confident package that is comfy in its own understated skin. While the CLA cried for attention, the A-Class Limo has a quieter persona, one that might find more admirers in the longer run.

As intended, the 6300 Lumen headlamps pierce through the darkness, just like the design of the A-Class slices through the air; this Merc has the lowest drag coefficient of any production car in the world today! The seals between the headlamp and the bonnet and the “Aero” design alloy wheels all help clean the air flow around the car to make it slippery.

Even though the A isn’t as wide as the 2 GC, the 0.22 cd figure is impressive considering it is longer and taller than it!  The latter point is important because the A Class doesn’t use a coupe style roofline, instead opting for a roofline that stays up to offer more headroom to the rear seat occupants. It looks more like a traditional Mercedes sedan, not some boy racer for sure.

This roof line drops down to a boot that looks a bit stubby in profile. However, viewed from the rear the A looks handsome. Erupting from the boot onto the quarter panels are the boldly styled LED tail lamps. Lower down, the chrome exhaust tips spice up the bumper too, but keep in mind those are dummy outlets.

The 405-litre luggage capacity is reasonable for a weekend getaway. but it isn’t class leading. It drops by another ten litres on the diesel variant because of the addition of an AdBlue tank for exhaust gas treatment. The space-saver seen in the boot on these CBU cars used for homologation will be packed under the boot floor on the final cars produced in India.

Overall, this millennial is quite restrained in its style and all the more admirable for it, however we do hope Mercedes offered brighter colours like red and yellow to make it feel a bit younger. Until Mercedes does, the Carbon Pack, for roughly Rs 1.5 lakh, will splash on some sportiness with carbon fibre accents on the front lip, the side skirts, A-Pillars and the boot lip.

Obviously, you start off in the backseat when a vehicle calls itself a limo! The A-Class’ wheelbase is 59mm longer than the BMW 2 GC and you can feel the difference inside the cabin. Kneeroom is healthy and there’s enough headroom even for six-footers to sit comfortably here. This would have been a truly comfy experience if the under thigh support had been better, which has been compromised by setting the seat low to offer more headroom. Also, if there was more room to push your feet under the front seats it would have been more relaxing for taller occupants to. As is, shorter, 5’6” occupants like me would be quite at ease here for intercity stints too.

Keep in mind three will be a squeeze in the back, however Mercedes has thoughtfully provided a headerst and a three-point seatbelt  for the middle occupant too. Rear seat occupants also get an armrest with two pop-out cup holders, two USB C charging ports and AC vents, but it lacks a simple fan-speed control. Yes, the A-Class gets a two-zone climate control with both the zones focussing only on the front seats.

So, the Limo quotient is a bit thin. You don’t get sun shades, music controls, or any kind of seat adjustment. The door pad design is bland and a boss-mode switch to adjust the front passenger seat would have been a nice touch too. The sunroof, although large, ends much too early for the rear seat occupants to get the “panoramic” vibe.

But the premium experience is quite emphatic in the front seat. The dashboard design is minimal and gives the cabin an airy feel as the two large 10.25” screens clear the dashboard of clutter and also squeezes it tight. It also feels lavish because of the rich materials in use - perforated leatherette or plush plastic wraps for the different panels. The weathered wood trim looks and feels as though it was plucked off of some beached ship. Characterful!

This contrasts nicely with modern touches like the 64 colour ambient lighting, which also glows from the turbine-style air-con vents. These vents too feel plush as they are nicely damped and finished in a satin chrome which feels cool and metallic to the touch.

The two HD screens are crisp and the MBUX system makes full use of their potential with crisp and sharp visuals. There is Apple CarPlay and Android Auto on offer, albeit without wireless connectivity, although you do have a wireless phone charger on offer. The infotainment system  can be controlled using the Mercedes Me voice commands, via the haptic touchpad on the centre console, or via the clever touch controls on the steering wheel. The steering mounted controls on the left are linked to infotainment, while the ones on the right are linked to the driver’s display which is customisable too. The rev or speedo counter can be swapped for other readouts, like vehicle distance alert, onboard navigation or cruise control.

As it has connected car tech the A Class can also be accessed via a phone app, or you can get updates on your Alexa or Google home devices. You can ask for the kilometre reading, location information or even setup speed warning. The A also pampers the occupants with powered seats including lumbar adjustment and memory function. They also feature manually adjustable under thigh support extension. Quite clearly, the wow factor in the A Class Limo is in the front seats.

However, when it comes to safety Mercedes has quite a long list that aside from the usual electronic adis like ESP and Pre-Safe also includes radar based Active Brake Assist for emergency braking, Active Bonnet Function to minimise pedestrian injury, and a total of seven airbags including a knee airbag for the driver. It even features semi-autonomous Park Assist to make life easier in the city.

The A Class is available with a choice of two A200s - a 1.3 litre petrol and a 2-litre diesel. The diesel makes 150PS of power and 320Nm of torque which is sent to the front wheels via an 8-speed dual-clutch transmission. However we drove the petrol, which makes a healthier 163PS of power and 250Nm. This engine uses a 7-speed dual-clutch transmission and was co-developed by Daimler with the Renault-Nissan-Mitsubishi Alliance.

The A 200 is great for everyday driving as the engine is smooth, yet quick to dart forward when travelling at low speeds in the city. Mercedes claims an impressive fuel efficiency of 17.5kmpl for the A200 petrol. This is also because it has mild hybrid tech like engine start stop and brake energy recuperation.

But is it bratty?

The paddle shifters allow you to take control of the snappy gearbox, for more precision while the engine modes alter the nature all round. The Sport mode feels more engaging as the engine is more responsive and the gearbox more aggressive, however, the link between the accelerator pedal and the engine is far from instantaneous. Compared to the diesel, the petrol is down on torque and gets a ratio less, but it nails the 0-100 kmph time a tenth faster than the diesel.

While we wouldn’t call it racy, it is quick and you will enjoy pushing it because  the engine revs quickly and is making good progress at its 6250rpm redline. When flogged, the throaty buzz adds character to the driving experience too.

The other reason you enjoy driving the A Class is down to the way it hits the curves. This front-wheel drive Merclet, despite the meagre 205 section rubber, is quite zesty! Chucked into a bend at speed it holds its line with confidence. The sharp steering lets you place the car inches from the kerb with precision too as you pound through the esses. The steering, although light at low speeds, weighs up beautifully when going fast. So the chassis makes sure the engine’s potency isn’t wasted one bit. As you push harder the Pirelli Cinturatos start to protest and as you run out of traction, ESP steps in to keep things tidy without making a noise about it. So, if you find yourself on a winding road with the A Class, you would be a happy driver.

The suspension is also adept at tackling poor road conditions to keep you comfy, be it at low speeds or high speeds. However, it could do with a bit more of polish, as big potholes and sharp edges can be felt every now and then, and the cabin could have been a bit quieter.

The A Class is a true blue Mercedes. It aims to wow and does so too. The cabin experience is rich and on par with any of the bigger Mercs. Its driving manners are packed with a quiet confidence that makes time behind the wheel all the more enjoyable. For its size the A Class has managed to deliver a backseat experience that is far more practical and enjoyable compared to the CLA before it, making the A Class a far more complete offering. However, to earn the limo tag the backseat experience would have to stretch the envelope further, be it in terms of ergonomics, the ride quality or the creature comforts. Nonetheless, at an estimated Rs 40-42 lakh the A Class Limo will be a well rounded option for people stepping into the Mercedes family.