The all-new Maruti Dzire has been unveiled and it's completely different from the older sedan. But, is this a good thing for the competition or has Maruti managed to further strengthen its position in the space? 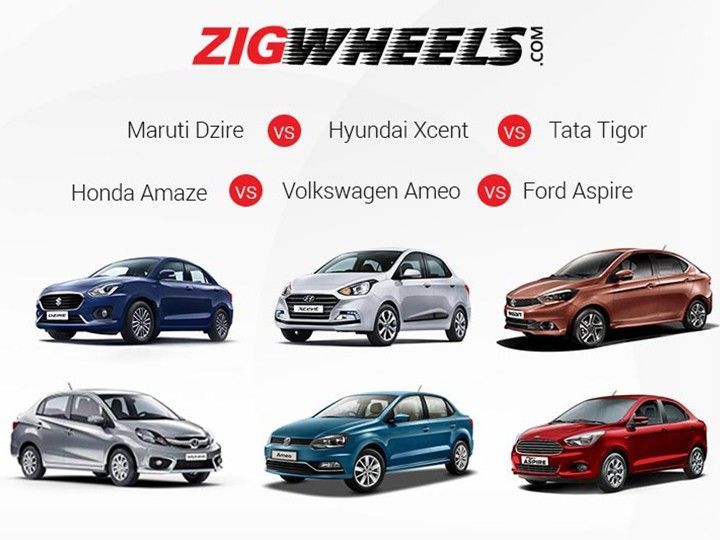 Maruti's new car in the country might also be its most important one. After the Alto, the Dzire has been the second highest selling car in the country for the past three years. And it is important to note here that the Dzire costs nearly twice as much as the Alto. Now, when such an important car gets a new generation, you bet the entire country is looking forward to it.

Now that the new Dzire has been unveiled, it's fair to say that we are impressed. This is all the more reason for the competition to be worried as the new Dzire not only comes on par with the equipment levels but even raises the bar higher. So, let's have a comparative look at the segment (which includes the Tata Tigor, Honda Amaze, Volkswagen Amro, Hyundai Xcent and Ford Aspire) and see, with the new equipment, how the new Dzire stacks up against the rest, especially the recently launched Hyundai Xcent facelift.

The new Maruti Dzire retains its well-acclaimed powertrains from the current generation sedan, which means it will continue with the 1.2-litre VVT petrol and the 1.3-litre DDiS diesel. There has been a slight change in transmission though. The 4-speed automatic which was paired with the petrol engine has been replaced by a 5-speed AMT. Hence, both the engines now feature a 5-speed manual and an optional 5-speed AMT. The fact that AMT is being offered with all the variants except for the base, gives the Dzire an edge, as a lot of its rivals do not offer automatic options with the top-end variant.

When compared with other cars in the space, the Dzire always had a better fuel efficiency, though it was a little short on power. Maruti hasn’t revealed the engine specifications of the new Dzire yet, but we expect them to remain similar to the current sedan, while the fuel efficiency should be increased courtesy the new, lighter platform. Considering the older numbers for power and torque, the Ford Aspire remains the most powerful petrol while the Volkswagen Ameo is the most powerful diesel.

The Bigger, The Better

In the sub-4-metre category, the exterior dimensions of the car are limited to benefit from the law. Hence, it depends on the manufacturers how they can cleverly scoop out space inside the cabin while maintaining a decently sized boot. The Dzire, until now, was on the lower end of the segment in terms of cabin space. But now, Maruti has built it on an all new platform and hence, it gets wider and has a longer wheelbase. The result is simple - more space. Also, while doing this, the Dzire has also managed to increase its boot space by 62-litres. For the number crunchers, new Dzire is same in length, 40mm wider, 40mm shorter in height and 20mm longer in wheelbase and now rides 163mm off the ground which is 7mm lower than before.

When compared to the rivals in the segment, the Dzire is the widest car, while the Ford Aspire has the longest wheelbase and the Tata Tigor is the tallest with the biggest boot. Though, when speaking of space,  the dimensions could be misleading and the final verdict will be given as soon as we have all the cars together for a comparison test.

The market is changing. And this change has favoured customers. What this statement means is that the kind of interiors and features which were expected from a car worth Rs 20 lakh and more just a decade ag are now offered on cars not even half that price. That said, the older Dzire didn’t lack features, but was certainly behind the industry trend. But now, the new Dzire has addressed this issue and has become a leader in terms of features.

New in the all-new Dzire are automatic LED projector headlamps which get LED DRLs as well. The taillamps also get the LED treatment with LED light guides. Step inside and the feature list gets longer. You get a split personality steering wheel which is a sporty flat bottom unit but looks premium with fake wood inserts. Also, it gets a 7-inch touchscreen display which is skewed towards the driver improving the ergonomics of the car. This infotainment unit is similar to the ones we have seen on other Maruti cars and features Android Auto, Apple CarPlay and MirrorLink connectivity. At the back, you get a centre armrest with cup holders and rear AC vents to tackle the hot summers with ease.

LED lights all around the Dzire make it the segment leader in terms of features whereas other cars like the Xcent and the Ameo get the touchscreen infotainment system with smartphone pairing options and rear AC vents. The Amaze and the Aspire miss out on some features as they get conventional audio systems with Bluetooth pairing and no AC vents for the rear passengers.

From the above comparison, the new Dzire, on paper, is turning out to be quite a complete package. It carries on with the reliable powertrains, with the automatic transmission options and now gets loads of goodies which make it a premium offering. In fact, the Dzire now gets, even more, features than its elder brother - the Ciaz.

In terms of the competition, cars like the Xcent and the Ameo do come close but the network, and in turn, the popularity of Maruti is what simply puts the Dzire in a league of its own. With the new Dzire, Maruti has certainly made the sedan better and the opponents would have a harder time competing against the current leader. More info on the Dzire will be coming out soon in the form of a road test review. Stay tuned.