The Nios is the latest entrant in the midsize hatchback segment. While it promises more in terms of cabin experience and features, can it be as exciting as the quintessential Swift? 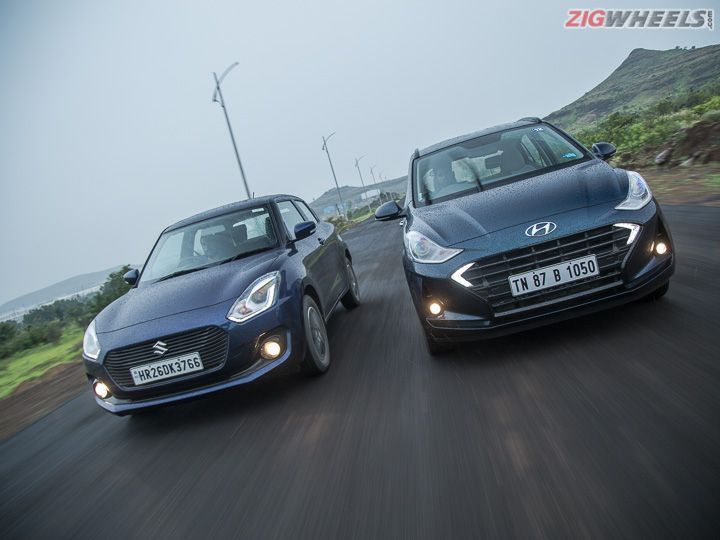 Smaller cars have always been economical to own, easier to drive and park in the city. But because they are also light and nimble, they’ve never needed heaps of power to be fun as well. It’s this excitement that the Swift has always delivered on. And now, we’ve got the Hyundai Nios which brings a lot to the table, including a striking design and an impressive feature list. Can it knock the rock-solid Maruti Suzuki Swift off the top spot in the segment while being engaging too?

Personally, the Swift is the sportier-looking of the two. That curvaceous shoulder line and flared wheel arches give it substance. And the large front grille only furthers this sporty stance. The Swift also sports all-LED lighting, projector headlamps, and 15-inch alloy wheels. The sides and the rear are nice and clean with the highlights being the C-shaped LED tail lamps. The Nios may promise more but when you take a look at the dimensions, it’s still the Swift that boasts slightly larger numbers.

The Grand I10 Nios wears a more universally appealing look. The sides are slim, the windows are large and the design is a nice mix of lines and edges that keep it distinctive. One of the highlights being the boomerang-shaped DRLS that surround the front grill. The Nios also gets LED DRLs with projector headlamps but adds in projector fog lamps as well. There are also small rails that further enhance the visual impact of the Nios. At the rear of the Nios, there’s a large chrome accent at the edge of the boot lid and a large Nios badge under the Hyundai logo.

While the Swift impresses on the outside, it’s the Nios that really impresses inside. You immediately feel like your sitting high up in the car and that combined with the large windows gives you great visibility. The light grey interiors further enhance this feeling of airiness that shifts favour to the Korean’s corner. The seats are nicely contoured and the cushioning is on the firm side and while I do like that, they aren’t quite as supportive as the Swift’s seats. Also, when you try to drop the seat to its lowest setting, it starts to tilt the seat base backward, which isn’t quite comfortable. The driver and passenger seat headrests aren’t adjustable but the integrated headrests are more than adequate for most drivers. The rear gets adjustable headrests and the rear seat base is also nice and supportive.  The smaller integrated headrests are also a boon for rear passengers as they get a better view out of the cabin. There’s also more knee, head, and foot room here than in the Swift even though it’s not as good at fitting three abreast. In terms of practicality, there are bottle holders in all four doors, rear air-con vents, and a power outlet too.

The Swift’s seats sport softer cushioning but are also more supportive both on the seat base and the seatback, and they do a better job of keeping you in place around quick corners. They can also be dropped nice and low, giving you a nice driving position. There’s also a delightful driver focus to the Swift with the touchscreen and the dials below it slightly tilted towards the driver and you also get a flat-bottom steering wheel as well. Yes, these are little touches but something that the enthusiast driver will notice.

In the rear, the experience isn’t quite as nice as the Nios with the seats feeling a little soft and the large front headrests and blanked out rear quarter panels (where the quirky door handles reside) hem in rear passengers. The all-black upholstery and dash don’t help matters either.

Another area where the Nios scores more than the Swift is the nice tactile feel to the buttons and switches. Also, the touchscreen also has physical buttons that make it much easier to use when on the move. There are other subtle touches like the hexagonal pattern in the door and dash trim that make it feel like a cabin from a segment above and the Nios also adds wireless charging  - a first in the segment.

Where the Swift does excel in though, is in boot space. Although it’s only 8 litres down on the Nios, it’s depth allows it to better swallow luggage and the 60:40 seat split further aids practicality.

As soon as you start to pull away in the Swift, the biggest impression is made by that K12 petrol under the hood. It loves to spin up quickly and even though Maruti has geared the Swift fairly tall in search of class-leading efficiency numbers, it’s still exciting. And soon all those driver-focused bits like the flat-bottom steering and the tilt to the touchscreen and dials start to make sense. The steering is pretty sharp, the throttle is responsive and the gear shifts are very positive with nice short throws too. And they all combine to make it a very involving driving experience.

In the city, the Swift is delightful to drive with the flexible engine keeping gear changes to a minimum and the light clutch helping things when traffic forces you to keep shifting. The sharp steering also helps when manoeuvering in tight parking spaces.

With the Nios, the new steering is a pleasant surprise and is nicely weighted. It seems Hyundai has been listening to our feedback then. But it’s not yet perfect, so while the weight is nice, there is no feel at all so you can’t really tell how much grip you have at the wheels. Strangely, the gearbox shifts are also a little notchy and throws are long, not something that we’re used to from Hyundai.

But those are the only two niggles and like most Hyundai’s, it’s perfectly at home in the city. The 1.2 Kappa engine has great driveability and like the Swift, it’s geared rather tall. At small and medium throttle, the engine is nice and responsive; it’s only when you really up the pace and ask for all the motor can give that it starts to pale in comparison to the Swift

The Swift darts into corners enthusiastically and that light chassis starts to shine when you up the pace. Mid corner composure is also better than the Nios and understeer only starts  to creep in when you start to push hard. The Nios, on the other hand, feels just a little lazier to turn into a corner and there’s just a little more body roll that starts to creep in when you up the pace, but it never gets out of hand. The Nios is the better performer on the brakes though, outbreaking the Swift both from 100-0kmph and 80-0kmph tests despite being the heavier car.

When it comes to ride quality, the Swift’s setup is just noticeably stiffer at city speeds. The Nios does a better job of soaking up small imperfections and medium-sized bumps better than the Swift. But bigger bumps tend to unsettle the suspension and it also can bottom out if you go over big bumps too fast. The Swift’s stiffer setup does handle the bigger bumps better. On the highway, they both feel nicely planted - the Nios being just a tad better insulated from road and wind noise.

And not only is the Swift able to outpace the Nios, its able to outrun it too, posting better efficiency figures in both city and highway tests.

When it comes to safety, both cars offer similar kit. So you get two airbags, ABS with EBD as well as parking sensors as standard. The Swift offers ISOFIX child seat mounts as well.

The Nios offers you more in terms of its cabin experience and feel-good factor. Being Rs 40,000 cheaper than the Swift, it packs in a lot of value and features and feels like a car that families will enjoy being in. On the other hand, for both the young and young at heart buyers, the Swift petrol is still the quintessential go-to car that's exciting to drive and economical too. When it comes to choosing between them, with no real deal breakers on either side, it’s really a win-win choice. But when it comes to giving you butterflies in your stomach and plastering a smile on your face, it's the Swift petrol all the way