Honda has spent a lot of time refining the Amaze’s package. Tweaking sound insulation, space and even adding in a new automatic transmission in a bid to gain some ground on the Dzire. Will the Dzire maintain its utter dominance or is the Amaze finally… Amazing? 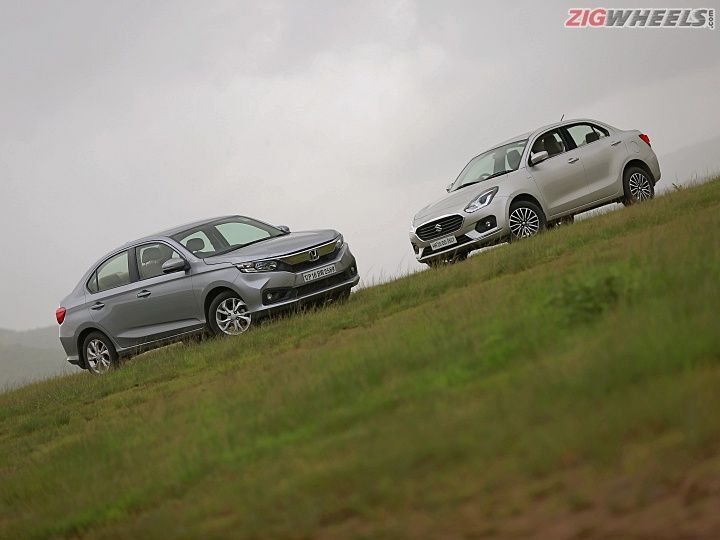 Even today, the Maruti Dzire is a force to be reckoned with. It’s practically single handedly carrying the sub-4 metre sedan segment on its shoulders. The car even manages to virtually outsell its entire competition put together. However, the Honda Amaze has been reborn and is looking to hit back hard. The car has changed significantly, pushing Honda’s man maximum machine minimum philosophy to the limits of the four metre constraints. And we were pretty impressed when we drove the Amaze at its launch, especially with the new diesel CVT transmission. But for this review we will take a look at the most economical models - the diesel manual variants.

Cutting edge design?
In terms of packaging, these two cars are on the cutting edge of their design, cramming everything that the average Indian car buyer wants, into the parking spot of a hatchback. But, in the past, because of the sheer engineering that went into these packages, the aesthetics used to be compromised. That is until Maruti Suzuki broke that mould with a design that for once in the model’s lifespan, doesn’t looks like an afterthought. It is also a pleasing mix of curves and simple lines that don’t really turn any heads but you will be hard pressed to dislike it at the same time. It’s just vanila.

The Honda Amaze, on the other hand, has inherited the edgy, shark like ‘family’ look with a new chrome rich nose. While it‘s quite striking to some, as we’ve said before, it can be polarising too. The bigger problem with the Honda is the rear end. In maximising the space under the bootlid, the rear-end has ended up looking like it’s been cut and shaped with a cake spatula into a rather characterless flat surface.

It’s the side profile that really shows the Amaze’s squared off proportions. It’s borderline SUV-like, when compared to the more effeminate curves of the Dzire. The Amaze looks like a heavily compressed version of the new Honda Accord and the result can come across as odd for some. Both cars measure 3995mm in length, just under the 4-meter ‘small car’ constraint, but the Dzire is 40mm wider and 10mm taller than the Amaze.

They are both big improvements over the designs of their predecessors with neither really outdoing the other. Overall though, whether you like or dislike it, the Amaze will certainly stand out, while the Dzire will make more people happy.

Space maximum
In terms of space on offer at the rear, measurements for both the cars belie their meagre proportions. The Amaze only just edges past the Dzire in the kneeroom department with 925mm of maximum kneeroom as compared to the 915mm in the Dzire. To put that into perspective, that’s more than enough to have a 6-foot tall person in the rear seats without their knees touching the front seats. But the way the Amaze achieves this is by restricting the movement of the front seats rearwards. This is evident from the front legroom figures where the Dzire’s 1090mm of maximum front leg room clearly trumps the Amaze’s 965mm. Another result of this compromise of front seat space is in the Amaze’s boot, which has swollen to 420 litres of class-leading boot space, compared to the Dzire’s 378 litres.

Both cabins feature a dual-tone interior with black and light beige for the Dzire and a slightly darker shade of beige for the Amaze. The Dzire has gone for a more classy look with faux wood inserts on the dash and side panels, while the Amaze has slightly more subtle piano black highlights around the cabin. You will also find that the Amaze’s dashboard sits quite tall and it’s fair to say this layout would feel right at home in a compact SUV!

Creature comforts are fairly on par with both featuring touchscreen audio systems with Android Auto and Apple CarPlay, push-button start, keyless entry and auto climate control. Maruti goes a step further offering LED automatic headlamps. Honda does offer cruise control, though only with the manual transmission variants. One point we’d like to add to this is that while we screamed and complained about the old Honda infotainment software system, the new DIGIPAD 2.0 is a much nicer experience and is now on par if not better than Maruti’s “SmartPlay” system.

The Amaze has the softer seats and while they are comfortable for short trips, they lack lateral support and on longer trips tend to get a little warm to sit in, compared to the Dzire. The Dzire’s seats are firmer, but nicely contoured and are quite comfortable over long journeys. Rear seat passengers get armrests in both cars and the Dzire scores higher here with a set of AC vents for rear passengers as well. Rear seat occupants on the Amaze have to share the front AC vents. But the Honda blower and compressor units are so impressive that even on a day where the mercury was inching close to 40 degrees, with three people in the car, we found we had to bump the temperature gauge up to 26 degrees as it was getting too cold in the car! So while on paper, the Dzire seems to have the upper hand in the cooling department, in reality they are on par.

Still the Dzire just edges ahead of the Amaze by offering more balanced usage of the sub-4 metre constraints, offering better space for all four or five passengers and with the small benefit of being able to direct the air better to the rear passengers with those dedicated rear AC vents and adjustable rear headrests as compared to fixed cushioning in the Amaze.

Behind the wheel
While both are very closely matched in terms of looks and their interiors, they offer quite different flavours behind the wheel. The 1.5-litre Honda engine has both a displacement and power advantage that’s evident in practically every driving situation. The Maruti falls behind here with the old 1.3-litre engine being further dulled by rather widely spaced tall gear ratios.

Step on the throttle of the Amaze and it will leave the Dzire in its dust. In our tests, it was a whopping 2.5 seconds faster in the sprint to 100kmph. In the real world too it’s the more pleasing engine to drive with much better response to prods on the throttle for quick overtakes or closing gaps in traffic. This even shows in our roll on tests with the Amaze being over 3 seconds faster in third gear accelerations from 30-80kmph. The only complaint is that vibrations can be felt by the driver through the steering wheel, floor board and even pedals.

This doesn't mean that the Dzire is rubbish; quite far from it actually. In isolation, the lack of grunt is not as obvious and those long ratios mean that at the same speeds, it’s turning slower revs than the Amaze and generally feels slightly less vibey. The tall gearing that hampers it in driveability really does pay dividends on the highway, though, with the Dzire returning an insane 28.09kmpl on the highway compared to the Amaze’s 23.37kmpl.

To sum up the performance, the Amaze has the more pleasing powertrain in terms of sheer driving pleasure. The Dzire has a clear efficiency advantage, albeit only on long trips and is ever so slightly the more refined engine.

Being driven
Along with the promise of more space in this segment, the Dzire and the Amaze have both upped the comfort quotient as well. Both cars are a huge step up in this regard from their previous iterations.

The one aspect that has made a big difference in the Amaze is the additional sound deadening that Honda has added. This has addressed the biggest complaint we had with the old Amaze. The terrible road noise that used to creep into the cabin at highway speeds was at times unbearable. Now things are on par with competition with our test car just a little quieter than the Dzire. Surprisingly, they both did have a few squeaks and rattles as well, reminding you that you are still at the budget end of the sedan market. It’s also quite obvious that these are both diesels, from the drone that’s evident at higher revs in both cars. The change from before is that the Amaze is just a little quieter than the Dzire when it comes to external noises.

Ride quality in the Dzire is actually quite good. It’s the firmer setup of the two but absorbs most bumps without much complaint with little side-to-side movement and it also settles back down quickly. In comparison, the Amaze’s suspension is softer, but is only composed at slower city speeds when it absorbs everything, keeping occupants comfortable. But as speeds rise, it tends to get a little unsettled and a distinct bounciness starts to set in. Going over undulations at 60kmph or faster is an easy affair in the Dzire but in the Amaze, you may find yourself reaching for the grab handles.

The Dzire then is the more comfortable car in most situations, but again we have to stress that the margins here are very minute indeed.

Verdict
Of the two top-spec diesel manuals, the Dzire is Rs 19,000 dearer than the Amaze and for that price you get the better headlamp setup with those auto on LED projectors (which really do provide better night time illumination), while the Amaze does get cruise control. And through the range too, the Amaze and the Dzire are not separated by much on the price and features front. The Dzire does offer two AMT automatic options in its top and one below top petrol and diesel variants, while the Amaze gets a better CVT transmission, but only in the two variants that sit below the top-end variant.

While they both have their strengths and weaknesses, this is a really really close one to call. The Dzire has the more comfortable cabin for all four passengers, a very frugal engine and a nicely balanced ride quality. The Amaze delights you with its performance, class-leading boot and spacious cabin. Honda has really made a lot of moves in the right direction and we can say that it’s starting to live up to its name. But for all of the Amaze’s virtues, the Dzire manages to do most things just that one bit better. We’re certain that the Amaze is going to do some damage to the Dzire, but not enough to take away its crown.