The king of the sub 4-metre sedan segment is back in a whole new avatar. What has changed? 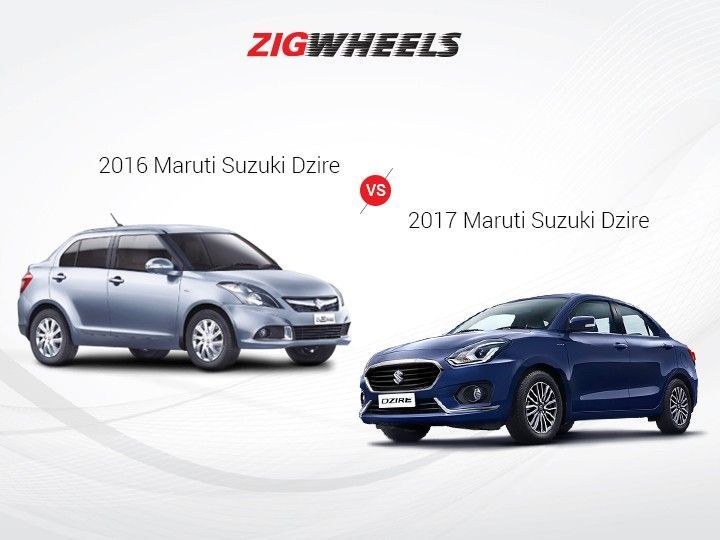 Before the all-new Dzire came along, the Swift DZire was the highest selling 4-metre sedan in the country. At first glance, it looks like the new Maruti Suzuki Dzire will continue where the older model left off - right at the top. It looks fresh, has fancy new features and has a higher focus on safety. But how much better than before?

This is the first time the Dzire sedan has been launched before the Swift hatchback and unlike previous iterations - more effort has been put in to make the design more coherent, instead of it looking like a hatchback with a boot attached.

The Dzire hasn't grown in overall length, it has to be under the magic 4-metre mark to be eligible for government subsidies. But being based on a new 'Heartec' platform - it is wider, has a longer wheelbase and has a larger boot. A lower overall height also lends it a better look. The new platform has also made the new Dzire lighter than before which has, at least on paper, help increase efficiency.

The Dzire use the same powerplants as before. The petrol variants of the compact-sedan are powered by a 1.2-litre, 4-cylinder, K-Series Suzuki petrol motor as before. The interesting thing is that in the new Dzire, both the power and torque figures are less than before - by 1PS and 2Nm, respectively. The petrol automatic variants of the Dzire are now fitted with a 5-speed AMT (automated manual transmission) instead of the 4-speed single-clutch automatic available earlier. The combination of lower weight, reduction in engine performance and simpler AMT gearbox has resulted in an increase in mileage. While the manual variants gain 1.15kmpl, the new AMT variants return 3.5kmpl more!

The diesel variants of the new Dzire are also powered by the same engines as before, a 1.3-litre, 4-cylinder, turbocharged Fiat-sourced motor - power and torque figures remain the same as before. The decrease in weight has helped improve the fuel-efficiency of the car - both the MT and AMT variants return 1.81kmpl more than before.

Considering the fact that the new Dzire is offered with dual-airbags and ABS as standard across the range, it is only fair to compare the variants of the older car which were offered with both the features too.

This is one variant which loses more features than the older model. It seems like the new Dzire LXi/LDi variants are there just to grab eyeballs because of the lower prices (new LXi is Rs 7000 cheaper, LDi is Rs 9000 cheaper). While the addition of safer front seatbelts and ISOFix anchorage points in the rear seats are commendable additions, not having features like central locking, adjustable front headrests and front power windows makes this a variant to miss.

For a nominal cost increase (Rs 2000 more for the VXi and Rs 7000 more for the VDi), the V variants of the new Swift get a lot of new features. Highlights here include the rear AC vents, height adjustable driver seat, a Bluetooth compatible multimedia system and an electromagnetic trunk lock.

The top-of-the-line Z variants of the Dzire get rear AC vents, driver-side power window with auto up/down and anti-pinch feature along with ISOFix anchorage points in the rear bench seats.

There is no direct comparison between the old and new Dzire when it comes to the range topping Z+ variants, so we are comparing the 2017 Z+ variants with the 2017 Z variants. The additional features on the Z+ variants are mostly gimmicky, for those who want style over substance. The only two features which make the Z+ special are the 7.0-inch SmartPlay infotainment system and a reverse parking camera. These features could have been offered in lower variants, maybe in the Z variants, to make the Dzire more appealing. Paying almost Rs 89,000 more for the Z+ variants may be too steep for some.

The biggest takeaway from the price comparison between the old and new petrol variants of the Dzire is how much more affordable an AMT gearbox is. As compared to the earlier VXi AT variant, the new VXi AMT is Rs 31,000 less! Maruti has made the Dzire move upmarket with the introduction of a new top-of-the-line Z+ variant and by offering the AMT transmission with the VXi, ZXi AND ZXi+ variants.

In the case of the diesel variants of the new Dzire, the variant wise cost comparison throws a mixture of signals. In spite of losing a lot of features, the base diesel LDi variant costs Rs 9000 more than the comparative variant of the older car. Only the ZDi and ZDi AMT variants of the Dzire diesel are slightly cheaper than before. The top-of-the-line ZDi+ AMT variant takes the Dzire into Ciaz territory!

What do you think of the new Maruti Suzuki Dzire? Let us know through oour social media platforms over at Facebook and Twitter.