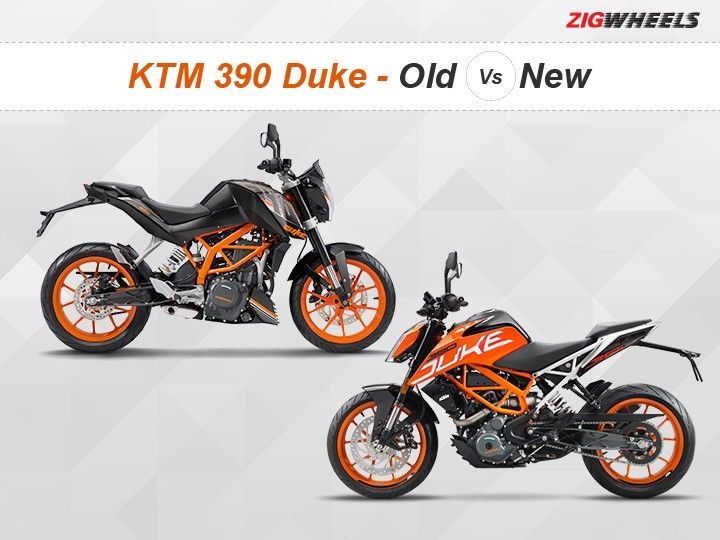 It was a remarkable day in the history of the Indian two-wheeler industry when Bajaj launched the first-generation KTM 390 Duke in India back in 2013. It was not the first time that a manufacturer launched a 350-400cc performance bike in the country with a price tag under Rs 2 lakh. However, the package of sportiness and performance that the Austrian brand offered was really uncomparable in this price bracket. And now, Bajaj has launched an all-new 390 Duke in the form of its 2017 model, which not only gets upgraded features but looks much sharper and meaner than its predecessor.

You can see the heavy visual updates in the bike as it gets a completely new styling and some changes in its trellis frame as well. The 2017 KTM 390 Duke receives a revised rear frame that is bolted to the main frame, unlike the welded one in the previous model. The bike shares new style lines with the 2017 KTM 1290 Super Duke R that almost keeps the silhouette of its predecessor.

If we compare the new 390 Duke with the old model, all the edges are much sharper, like the headlamp, fuel tank extenders and the tail. The bike now sports a more minimalistic design approach with even smaller body panels, giving it a more aggressive naked sport styling. The rear view mirrors in the updated model are wider, providing a better back view. Also, the bike now gets a UV protected paint that will last longer even if you park your bike under direct sunlight.

Talking about the dimensions of both the 2017 and the previous models of the 390 Duke, noticeable changes have been made to make the bike agiler. The steering head angle has been increased by one degree while the wheelbase has been reduced by around 10mm. Ground clearance has been increased from 170mm to 178mm and the saddle is also 30mm taller now, increasing the seat height to 830mm. The fuel tank capacity has also been increased from 11.2 litres to 13.5 litres, providing the bike with an increased range.

The new low-set, split-pattern LED headlamp looks more interesting than the regular one on the previous model. The tail lamp is also new and the LED turn indicators have also been revised along with their mountings.

The new model also gets a full-colour TFT screen instrument cluster - another major update that looks quite interesting. Ditching the headlight-mounted LCD display, the new screen comes directly mounted on the handlebar and some extra buttons have been provided on the left switchgear to control the more functional console.

It also gets KTM My Ride that allows tethering to your smartphone, giving you full control over incoming calls, and an audio player. All the information pops up on the bike's display and you can manage this optional extra with the menu switch. The ignition key hole has also been shifted from the handlebar to the front-top of the fuel tank. The new model also gets adjustable brake and clutch levers, so one can set them according to the requirement.

At its heart, the new-generation KTM 390 Duke continues with the same 373.3cc, liquid-cooled single that was doing duty on its predecessor as well. However, the 4-valve motor gets a new side-slung exhaust muffler along with some internal changes to make it compliant with the more stringent Euro4 and BS-IV emission standards.

The mill remains mated to the same six-speed gearbox and also retains the PASC slipper clutch system from the older version. It also continues to deliver 43.5PS of power while there is a bump of 2Nm in the peak torque delivery, pushing it to 37Nm. While all the updates have added around 16 kg of extra weight, however, you probably will not notice the drop in performance on the move.

Coming to the features, let's first talk about those which have been retained from the previous version. The 390 Duke continues to sport the WP suspension setup, comprising of 43mm upside-down front forks and a monoshock at the rear. However, the front forks are now open cartridge type with adjustable height, providing a broad spectrum of use. While the suspension travel remains unchanged at the rear, the front movement has been reduced from 150mm to 142mm.

The alloy wheels and tyres of the bike also remain untouched, and they still gel perfectly with the completely new styling. Braking duties are handled by a 230mm disc brake at the rear, like its predecessor, while the front gets a bigger 320mm disc brake for better stopping performance.

Till now, we have learned that the 2017 KTM 390 Duke has got significant updates compared to its older model. Still, the question is, at what cost? The new model has been priced at Rs 2,25,750 (ex-showroom, Delhi), which is around Rs 30000 more than the previous model. The upgraded specifications perfectly justify the extra cost, however, we will be able to provide a clearer word on it after riding the bike. So, keep visiting this space for the ride review of the new 390 Duke.