The long-delayed BMW G 310R will finally makes it way to India next year, but does it have the potential to overthrow KTM’s crown? 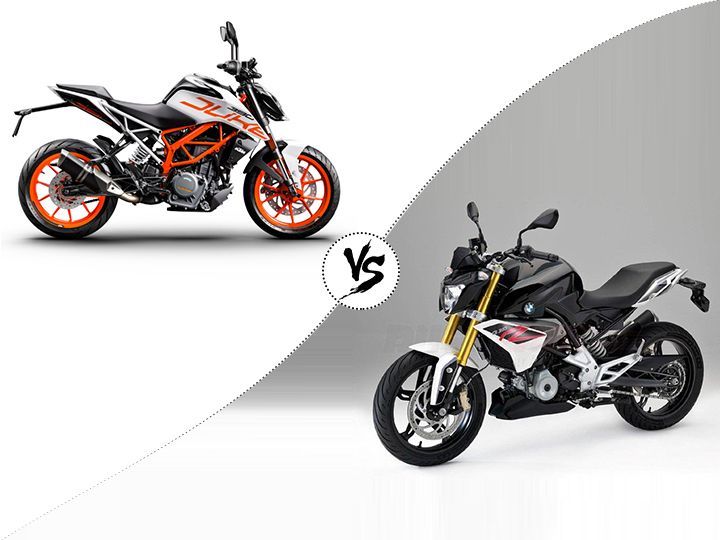 KTM has produced some of the most popular bikes in India. But BMW motorcycle is finally entering the hottest segment in association with TVS. The BMW G 310 R has been designed by BMW Motorrad in Germany but is manufactured in India at TVS’ Hosur facility. It’s the same story for the KTM 390 Duke as well as it is built at Bajaj’s Chakan plant and exported to global markets from India. How will the G 310 R fare against the king of the segment?

The long-delayed BMW G 310 R packs a 313cc, water-cooled single-cylinder engine which puts out 34PS of power at 9500rpm and 28Nm of torque at 7500rpm. It is equipped with a 6-speed gearbox. The 2017 KTM 390 Duke now comes with a 373.2cc, single-cylinder liquid-cooled engine. While the power output remains the same at 43.5PS, the updated model now gets an additional 2Nm of torque at 37Nm. The KTM too utilises a 6-speed gearbox. . The BMW G 310R clearly won’t be winning any drag races against its rival as it lags behind the KTM in terms of power and torque output. The KTM still remains the better option if you have a power hungry soul.

When it comes to features, the German motorcycle is easily behind its Austrian counterpart by a few good years. The BMW G 310 R comes with an LCD display which showcases all necessary information like speed, rev and gear indicator. it also gets dual tripmeter, engine coolant temperature information, fuel level and range. The BMW misses out on LED headlamps but offers an LED taillight. The lack of features may be a deal breaker for potential customers. However, you do get the option of buying a luggage carrier and a 29-litre top case. In terms of safety, you do get ABS as standard fitment.

The updated 390 Duke is leaps and bounds ahead of its predecessor. Instead of a traditional instrument cluster, you now get a TFT screen which is bright enough to be visible even on the sunniest of days. The TFT display showcases necessary information and you can also sync your phone with it for receiving calls and for music.  The buttons mounted on the left switchgear helps you navigate through the menus. The upside-down pitchfork headlamps are LED and come with integrated DRLs.  It is also the only motorcycle in its segment to feature both TFT display and LED headlamp. You also get ride-by-wire technology and a slipper clutch with the 390 Duke. ABS comes as standard and gets three different modes in the 2017 KTM 390 The Supermoto mode disables the ABS on the rear wheel. You even get the option of switching it off completely.

The Duke has a shorter wheelbase of 1357mm, handy while manoeuvring through tight spaces. KTM has used the same WP manufactured USD forks at the front with an open cartridge technology and a monoshock at the back with a pre-load adjustment. To stop the bike, the company has employed a 320mm disc brake with four-pot brake callipers at the front and a 230mm floating disc brake with a one-pot calliper at the rear. The KTM has a comparatively larger fuel tank of 13.4-litres. The 390 Duke uses 110/70 R17 tyres at the front and 150/60 R17 at the rear.

The KTM 390 Duke is priced at Rs 2.25 lakh (ex-showroom Delhi). We expect the BMW G 310R to be priced close to KTM premium offering. On paper, the KTM 390 Duke beats the BMW G 310R quite easily. But the German company has produced some of the best motorcycles in the industry and are renowned for their build quality and refinement. It will be interesting to see whether the made in India G 310 R lives up to the high standards set by the German bike maker. The sad part is that we will have to wait till next year to pit these monsters against each other on the tarmac.