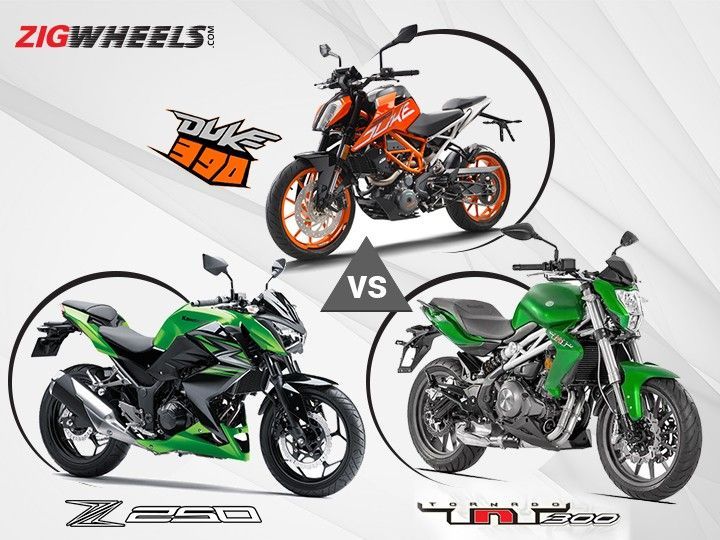 Bajaj has finally launched the 2017 KTM Duke range in India including the updated 200 Duke, the all-new 250 Duke, and the heavily upgraded 390 Duke. Here, we will talk about the most capable 390cc model and its rivals, the Benelli TNT 300 and the Kawasaki Z250, for a quick spec comparison.

The 2017 KTM 390 Duke is based on an advanced split type trellis frame, while the Benelli TNT 300 has trellis construction only for its main frame. On the other hand, the Kawasaki Z250 continues with a conventional diamond type frame. We know that design and aesthetics are subjective matters, however, we really liked the new 390 Duke's styling that is based on the bigger 1290 Super Duke R.

The Z250 also shares design lines with its elder sibling, the Z800, while the TNT 300 gets a basic design that quite reminds us of the previous generation Duke. Both the Kawasaki and KTM offerings look wild and aggressive like a naked sport motorcycle should be. However, the new 390 Duke is sharper and appears more advanced compared to its rivals. The bike features a compact, minimalistic design with sharp edges and an interesting LED headlamp.

The 2017 KTM 390 Duke sports the same 373.3cc, single-cylinder, liquid-cooled engine that was doing duty on its predecessor as well. However, the motor has been updated to comply with the more stringent BS-IV and Euro4 emission standards, and also delivers 2Nm of extra torque now. The motor makes 43.5PS of power at 9,000rpm and a peak torque of 37Nm at 7,000rpm.

The KTM 390 Duke is a clear winner here in terms of peak power and torque figures, which also come at comparatively lower engine speeds.

We have already mentioned that the 2017 KTM 390 Duke features an LED headlamp, so the bike now comes with all-LED lights. The bike also comes with a bunch of advanced features, such as multifunctional full-colour TFT instrument console, KTM MY RIDE, slipper clutch, ride-by-wire, dual-channel ABS and UV resistant paint. On the other hand, none of its rivals have any such interesting, advanced features, even as an optional extra.

The 2017 KTM 390 Duke retains most of the cycle parts from its predecessors, however, there are some upgrades such as open cartridge front USD forks with height adjustability and bigger 320mm front disc brake. Apart from that, the bike continues with the WP rear monoshock, 230mm rear disc brake, and 150 section rear and 110 section front tyres from Metzeler Sportec M5 series.

Standing close to it, the Benelli TNT 300 gets 41mm inverted forks, adjustable rear off-set shock absorber, 260mm dual petal disc brakes at the front and a 240mm one at the rear. The company provides option to choose from MRF tyres of the same size as the Duke or even wider Pirelli Angel GT tyres for an additional cost.

The Kawasaki Z250 seems much behind both of its rivals, with 37mm conventional telescopic forks, 290mm front disc brake and 220mm rear disc brake. However, the bike gets a 5-step adjustable link-type rear monoshock and 110-section tyre on the front wheel. The rear again gets a skinnier 140-section tyre.

Talking about the pricing, KTM really has set the bar to a remarkable level by offering the extremely loaded 390 Duke for just Rs 2.26 lakh (ex-showroom, Delhi). On the other hand, both the rivals cost over 3 lakh, over Rs 75,000 more than the new Austrian motorcycle. So, I guess we have a clear winner here and that is none other than the 2017 KTM 390 Duke.