The Scorpio N is more powerful and better equipped than its predecessor, but it faces a tough competition from similarly sized five and seven-seater SUVs 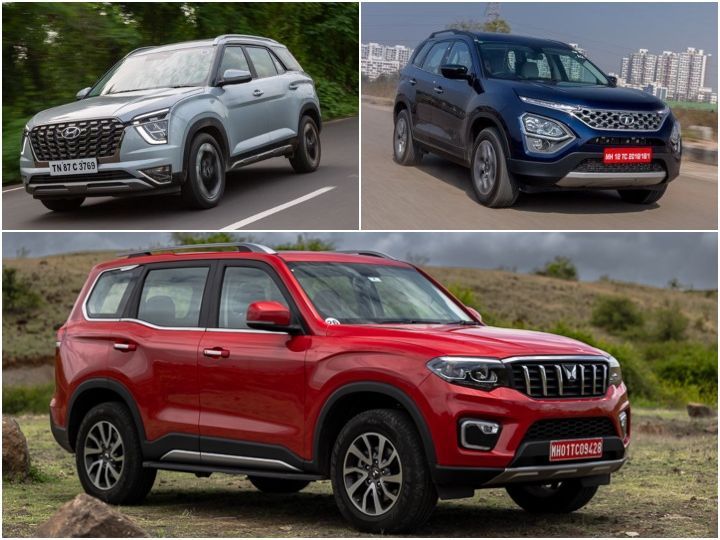 As a ladder frame, off-road capable SUV, the newly launched Mahindra Scorpio N stands out among similarly priced, monocoque-based, mid-size SUVs and their three-row counterparts. The most interesting bit is that the Scorpio does not have a direct rival right now when you consider its architecture. In addition, it offers a wide range of equipment and features that we’ve become accustomed to in the segment (sunroof, six airbags, etc.). So, how does it stack up against its well-established five-seater and seven-seater SUV rivals, which include the Tata Harrier, Hyundai Alcazar, MG Hector and Tata Safari?

Well, that’s what we are going to find out in this on-paper specification comparison.

The Scorpio N is the tallest and widest SUV here, and its 4662mm length is on par with similarly priced SUVs, too. Hyundai’s Alcazar has the longest wheelbase in this comparison, but the Scorpio N’s wheelbase is just 10mm shorter and comparable with the Hector and XUV700. The Harrier and Safari have the shortest wheelbase here.

Most of the Mahindra Scorpio N’s main rivals (except Harrier and Safari) get petrol and diesel engines with manual and automatic gearbox options. Here’s how the diesel powertrains of the SUVs compare with each other:

With the largest displacement diesel engines, the Mahindra stablemates trump the rest of the segment in terms of their power and capability. But it also comes in a base-spec tune in the lowest variant for those who are on a budget. The Tata and MG models come a close second, while the Alcazar, with its smallest engine, delivers the lowest power outputs.

While XUV700 offers all-wheel drive (AWD) with only the automatic variants, the Scorpio’s 4x4 system is offered with both manual and automatic transmission options. The Scorpio is also the only model to spin its rear wheels, while rest of the models here are front-wheel drive only.

In case of petrol engines, Scorpio N’s segment offers multiple naturally aspirated, turbocharged and mild hybrid options. The Safari and Harrier are diesel-only, so they have been excluded from this comparison.

Here too, the Mahindras lead the pack with the highest power and torque figures. The Scorpio N has a six-speed torque converter automatic option, which is common for the segment, while the Hector Plus gets a CVT automatic. Unfortunately, none of the petrol-powered SUVs are offered with a 4x4 or even AWD system.

Midsize SUVs are chock-full of features these days, and each new launch introduces a new feature into the segment. Here’s how the Mahindra Scorpio N’s equipment levels compare with its rivals.

Here’s a handy table with all the safety kit that you can get in the SUV and its rivals over the standard government-mandated equipment (dual front airbags, ABS, rear parking sensors).

The XUV700 is the only car in this comparison to offer active safety and driver assistance features. Arguably, the Alcazar comes second as it offers ESC, TPMS and ISOFIX mounts as standard features on all variants. As for the Mahindra Scorpio N, its higher spec variants are indeed well equipped with safety features and even get front parking sensors and a front camera for better visibility.

For now, we only know the prices of the manual variants of the Mahindra Scorpio N. Its automatic and 4WD versions, whose prices will be announced on July 21, are likely to be pricier than the upper range stated below:

All prices are ex-showroom

In conclusion, the Mahindra Scorpio N is a decently equipped SUV, which offers better off-roading capability and engine performance than its similarly sized and priced alternatives. It offers all the features you need and expect in your SUV, but for a more detailed comparison, read our Scorpio N first drive review and wait for the real-world comparison.