VW also showcased the Atlas Cross Sport R, an SUV which will participate in the 2020 SCORE Baja 1000 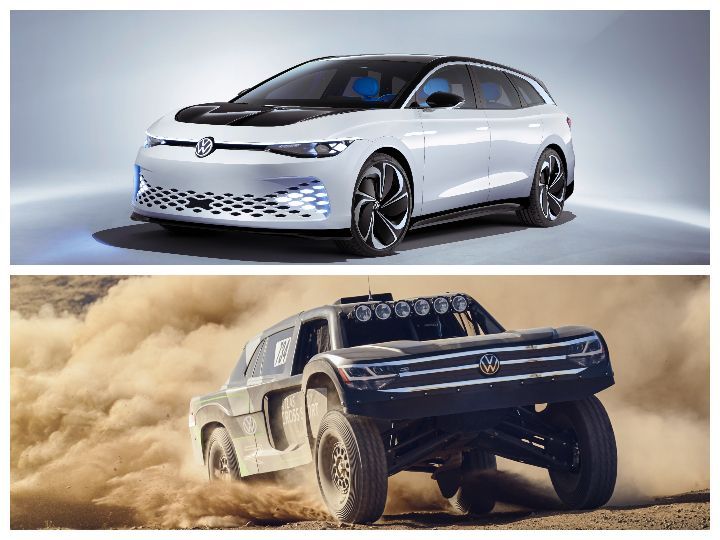 Volkswagen has unveiled the ID. Space Vizzion concept electric wagon at the ongoing 2019 Los Angeles Auto Show. The ID Space Vizzion concept previews the third model that will soon join Volkswagen’s ID range of EVs. It will be based on Volkswagen’s Modular Electric Drive Matrix (MEB) platform, and VW has said that the production-spec model will be sold in Europe and North America initially. The German carmaker also showcased the Atlas Cross Sport R prototype. The SUV will participate in the 2020 SCORE BAJA 1000 race. But before that, let’s have a look at what the ID Space Vizzion has on offer.

The VW ID Space Vizzion’s fascia is dominated by a typical ID. style grille with an illuminated VW logo. It also gets the sleek DRLs that starts from the Matrix LED headlamps and merges with the logo, a typical VW ID design trait. Lower down, the ID Space Vizzion comes with honeycomb-style LED DRLs with the outer edges acting as X-shaped turn signals. Then there is the blacked-out bonnet that blends with the tinted windscreen and the blacked-out roof, which gets a gloss black finish.

In profile, the ID Space Vizzion trades its door handles for illuminated touch surfaces that light up when it detects the key or the connected smartphone. They even give a haptic feedback when the person touches it to open the door. The use of touch-sensitive door handles has been done to improve the airflow around the sides of the car, which in turn improves its aerodynamics. It also gets 22-inch turbine style alloy wheels that sit flush with the wheel arches. All of this has helped the ID Space Vizzion achieve a super low coefficient of drag value of 0.24cd.

Inside, the ID Space Vizzion comes with a huge 15.6-inch infotainment system that controls almost all of the functions. Volkswagen has used renewable materials to drape the cabin to denote the ID’s eco-friendly nature. The chrome trims offered in regular cars have been replaced by alternate materials while the leather upholstery has been replaced by Apple Skin upholstery that is made out of the residual matter from apple juice. Future Apple Skin upholstery will also have a metallic surface and ambient lighting. The driver also gets his own set of features like the digital cockpit instrument display and augmented reality head-up display. Then there is the sleek three-spoke steering wheel that comes with touch capacitive buttons while the right side stalk now becomes the gear selector.

There’s an ID light as well. It  is a light strip that runs between both the A-pillar in the dashboard. It lights up in various scenarios like instructions issued by driver assistance systems and navigation, battery charge level and while using the voice command-based functions as well.

The VW ID Space Vizzion can be had with two drivetrain options: rear-wheel drive and VW’s 4MOTION all-wheel drivetrain. RWD variants are powered by a rear-mounted electric motor that develops 275PS of power. The 4MOTION variant gets an additional motor at the front and takes the total power output to 335PS. Both variants take juice from a 82kWH battery pack that’s capable of taking you 590km on a single charge (WLTP claimed). The battery pack also supports fast charging and can juice up from 0-80 percent in 30 minutes.

We expect the production-spec ID Space Vizzion to debut by the end of 2020 after the VW ID.4 crossover. Considering the Indian government’s plan to expand electric mobility, could we see VW’s ID range of care here soon? Well, only time will tell.

Volkswagen also showcased the Atlas Cross Sport R prototype SUV at the 2019 Los Angeles Motor Show. This SUV will participate in the 2020 SCORE BAJA 1000 off-road race that will be held in Mexico. It will be driven by VW rallycross champion and brand ambassador Tanner Foust. Volkswagen developed this SUV in conjunction with Tanner Foust and Baja race veteran Rhys Millen.

The Baja SUV from VW will be powered by a 2.0-litre 4-cylinder engine that develops 480PS of power. Power is sent to all four wheels, a first in the Baja Class 7 competition. The Atlas Cross Sport R is still under testing. The final version is expected to roll out in 2020.