From the outlandish Yamaha Motoroid to the realistic TVSes, the two-wheeler concepts showcased at Auto Expo 2018 hints towards a promising future 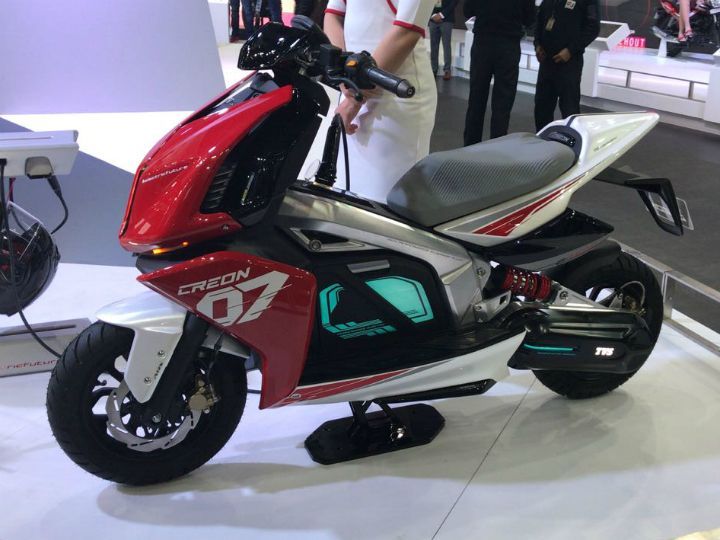 Let’s take the most realistic one first. The TVS Creon has been developed by the Indian two-wheeler manufacturer in collaboration with Intel. Intel has brought an array of smart-connected technologies to the mix which can open up a future of smart-connected gadgets. TVS has already given us a glimpse of smart tech on the NTORQ 125. Coming back to the Creon, it packs three Li-ion batteries that churn out 16PS of power.

It also gives the e-scooter a range of 80km with a 0-60kmph time of 5.1 seconds! That’s quicker than the Aprilia SR 150 and even the Pulsar NS 160! The batteries have been stacked compactly, which has in turn allowed TVS to keep its dimensions compact. Styled pretty futuristically, it flaunts a sharp and edgy bodywork.

The Zeppelin is a cruiser concept from TVS that has a lot going for it. It is powered by a combination of a single-cylinder 220cc engine that develops 20PS at 8,500rpm and 18.5Nm of torque at 7,000rpm, paired to a five-speed gearbox and a 1,200 watt regenerative assist motor with a 48V li-ion battery. The electric motor assisted by an Integrated Starter Generator System can add 20 per cent more torque to the overall performance of the bike when needed.

Think of the engine combination like Maruti’s SHVS, albeit scaled down for a motorcycle. The concept gets a belt drive as well. Should that make it to production, it would be the first for any made-in-India bike.

The Zeppelin looks like a proper power-cruiser thanks to its chunky 41mm USD front forks, a vertically laid out brawny LED headlamp and a flat handlebar. True to cruiser traditions, the forward-set pegs and the two-piece saddle should offer a comfortable and relaxed riding posture. Electronic wizardry comes in the form of a bio-electric key, online connectivity and an HD-action camera mounted in the headlamp cluster. There’s no official word on launch yet but TVS should be able to roll out a production-spec model by 2020 to take on the Bajaj Avenger 220 and the Suzuki Intruder.

After showcasing the PCX scooter at the previous edition, Honda is back with it for Auto Expo 2018, but it has now donned an electric avatar. The scooter is powered by a 0.98kW electric motor with a detachable Li-ion battery pack.

Hero Electric didn’t miss out on the e-scooter bandwagon either and showcased a total of eight electric two-wheelers at the Auto Expo 2018. Among the eight, the one that really stood out was the HE-18 e-bike. Powering the HE-18 e-bike is a 1500W motor that produces a peak power of 27PS. It has a range of 70km on a single charge and a top speed of 55kmph courtesy a 60 volt lithium-ion battery.

It’s no slack in terms of features either and gets automatic LED headlights, a USB port with power indicator, cruise control, smart connectivity and front and rear disc brakes.

Yamaha’s Motoroid or MOTOROiD has to be the most radical concept at the Auto Expo 2018. Why, you ask. For starters, the self-balancing bike can adapt to riding styles, adjust its seat girders according to the rider, project an augmented display and, most importantly, ride autonomously. Thanks to artificial intelligence the Motoroid takes the interaction between the bike and the rider to a whole new level, just as Yamaha intends it to be.

The concept is powered by a cola can-like stacked Li-ion batteries and sports racing slicks to affirm its sporty character. To reduce losses, the hub motor has been placed on the rear wheel itself.

While bikes seem to be a long way away from taking us for a ride, Auto Expo 2018 sure did promise some more realistic showcases which we might see plying our roads in the near future.