TVS pleasantly surprised us with this stunning concept cruiser

The TVS Zeppelin is a performance cruiser concept that is powered by a 220cc single cylinder engine with some added oomph from an electric motor. TVS has patented a new Integrated Starter Motor or ISG for this concept. 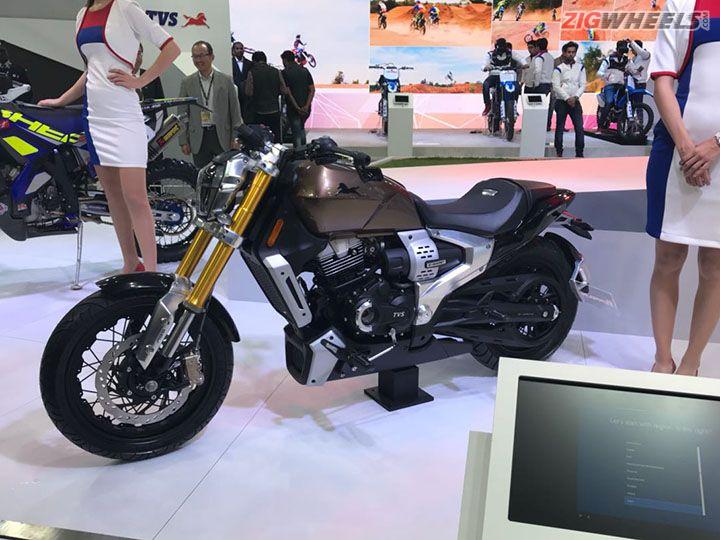 This electric motor is used to boost the petrol motor at lower speeds and help attain quicker acceleration. This should also help with the efficiency from the 220cc motor as it’s the acceleration cycle that burns the most fuel. In terms of function this sounds similar to Maruti’s SHVS mild hybrid system, which is used as a torque fill in Maruti’s Ciaz and S-Cross diesel motors.

The Zeppelin looks the business with beefy 41mm gold USD forks that add a nice sporty flair to the cruiser. Its headlamp is a pleasantly minimalist design but its shape ensures it not mistaken for being retro, and the tank echoes the same simple yet modern styling.

Below the tank lies a large faux radiator that is too large to be just an oil cooler -- but keep in mind that this is a concept motorcycle and they tend follow a more form-over-function philosophy. The fact that the engine is also heavily finned does not point towards liquid cooling.

TVS has included a nice wish list of features that include LED lights, bio-key, internet connectivity and an integrated action camera to capture your travel videos or just plain use as a dash cam.

Functionally though, the large front forks, monoshock rear suspension and belt final drive should ensure that should this bike make it to production, it will have the go to match its show.