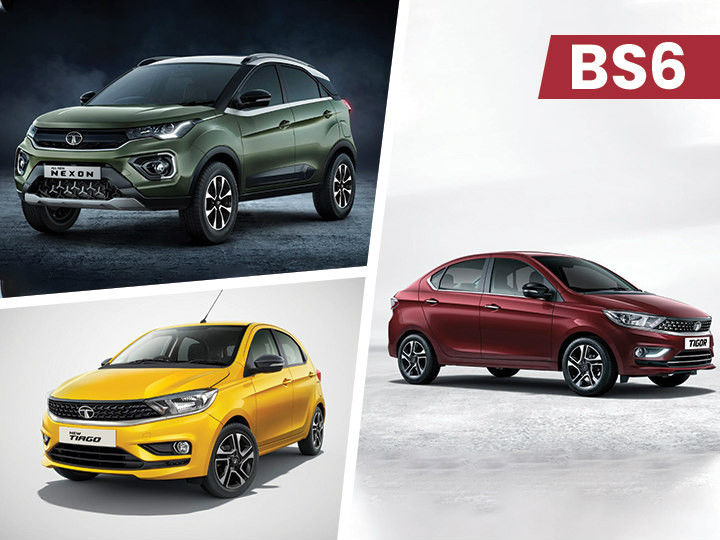 Tata Motors has launched the facelifted BS6 Nexon, Tigor, and Tiago alongside the Altroz hatchback today. The Nexon compact SUV gets a redesigned front fascia and more features. It is priced between Rs 6.95 lakh (petrol) and Rs 8.45 lakh (diesel) (ex-showroom).Tata’s Tigor and Tiago now look more like the Altroz thanks to a sharper nose and updated interiors. The compact sedan's prices start from Rs 5.75 lakh, while the hatch ranges from Rs 4.60 lakh (ex-showroom Delhi).

Tata has given the Nexon an all-new face. This is the same edgier and sharper face which we first saw on the Nexon EV. Dual-barrel projector headlamps featuring integrated LED daytime running lights (DRLs) flank the new grille. Beneath them sit fog lamps enclosed within large trim pieces which look like air dams. Although it is similar to the outgoing model in its profile and rear fascia, subtle changes like the revised LED taillamps, contrast white roof, and new alloy wheels make the new Nexon an attractive sub-4m proposition.

Inside, the Nexon borrows its touchscreen infotainment system from the Altroz. Automatic headlamps, cruise control and rain-sensing wipers are welcome additions. The semi-digital instrument cluster is right out of the Altroz. 35 connected car features let you control various functions and track the car’s location from your phone. Other feature highlights include traction control, hill assist, an electric sunroof, auto headlamps and rain-sensing wipers.

Let's take a look at the new prices:

Tata has discontinued XT and XT+ variants of the Nexon. The highest price deficits are for the top-spec diesel automatic, XZ+ petrol, and XZ+ diesel. Interestingly, the mid-spec XZ is a tad less pricey than before.

The main change in the Nexon is under the hood. It retains the 1.2-litre turbo petrol and 1.5-litre diesel engines, albeit with BS6 upgrades. Power outputs remain the same as before at 110PS/170Nm (petrol) and 110PS/260Nm (diesel). Both engines are paired with a 6-speed manual and an AMT.

The other two facelifts are the Tata Tiago and Tigor. Both cars receive styling changes focussed on the front. It includes a new bumper, a revised grille as well as new headlamps that resembles the Altroz hatchback. However, the Tigor gets DRLs on the lower bumper which isn’t present in the Tiago. Interior highlights include semi-digital gauges, a flatbottom steering wheel, reverse camera assist a 7-inch touchscreen infotainment system with Android Apple and Apple CarPlay as well as updated upholstery. The Tigor also debuts push button start/stop. The carmaker has announced that the two cars have scored 4/5 stars in the Global NCAP safety test.

Under the bonnet, both cars retain the 1.2-litre petrol engine, now upgraded to meet upcoming emission norms. It produces 86PS/113Nm, and is paired to either a 5-speed manual or an AMT. Both cars are no longer available with the 1.05-litre diesel engine as Tata Motors has decided not to offer small oil burners in its cars in the BS6 era.

Let's take a look at each of their price lists:

The XT variant has been jettisoned here, too. The XM is now the mid-spec variant, and it comes at a premium of Rs 20,000 over the BS4 Tiago. The steepest price increase is for the XZ automatic variant, Rs 35,000. But what about the Tigor?

Tata's pricing for the new Tigor is a bit more confusing. The XM variant is Rs 10,000 less expensive. Prices for the XZ, XZ+, and XZA+ models have not changed.

The new launches come ahead of the April 2020 deadline for implementation of BS6 norms, putting Tata on par with carmakers like Hyundai and Maruti Suzuki. We’ll be driving the updated cars soon, so stay tuned to ZigWheels for our first drive review.