Here's Your Clearest Look At The RE Hunter 350 So Far 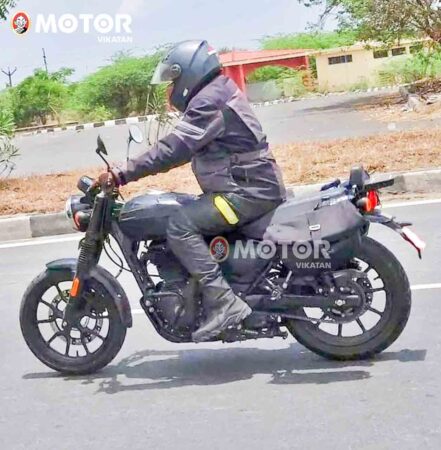 Another week, another batch of Royal Enfield spy shots. With the Chennai manufacturer planning to bring us something new every quarter for the next four years, it's hardly a surprise that we're seeing it unleash an army of test mules on our highways. This time around, it's the upcoming Hunter 350 that has been spotted in its clearest images yet.

Most rumours suggest this bike will be a scrambler, but these spy shots show little evidence to support that. Sure, it gets fork gaiters and a sump guard, but aside from that, the handlebar is set pretty low, it rolls on alloy wheels wrapped in street-focused rubber (no knobbies, not even semi-knobbies), and there doesn't seem to be a whole lot of suspension travel on offer. It seems then that the Hunter 350 is a retro roadster with just a tiny whiff of scrambler aesthetics.

We already know this bike will get the same 348cc single-cylinder 'J1D' as the Meteor 350, where it produces 20.7PS and 28Nm. What we don't know is how much the Hunter will weigh, but it certainly appears less substantial and dimensionally smaller than the Meteor, so it should be lighter, making it slightly quicker. There's a rather thick chrome bezel around the headlight, which, like every other light on the Hunter, is round and powered by a filament bulb. The blacked-out engine and stubby upswept exhaust system add a touch of sportiness, and overall, the Hunter seems to occupy the same space as the Honda CB350RS.

With well-formed body panels, functioning electrics and tidy wiring, this test mule seems very close to production-ready, if not already there. So it's quite likely the real test items were the accessories. Plainly visible are the engine crash guards, pillion backrest and saddlebags, so expect the Hunter, like most other REs, to come with an expansive list of accessories and optional extras. That official launch is expected towards the end of this year, at around Rs 1.70 lakh.