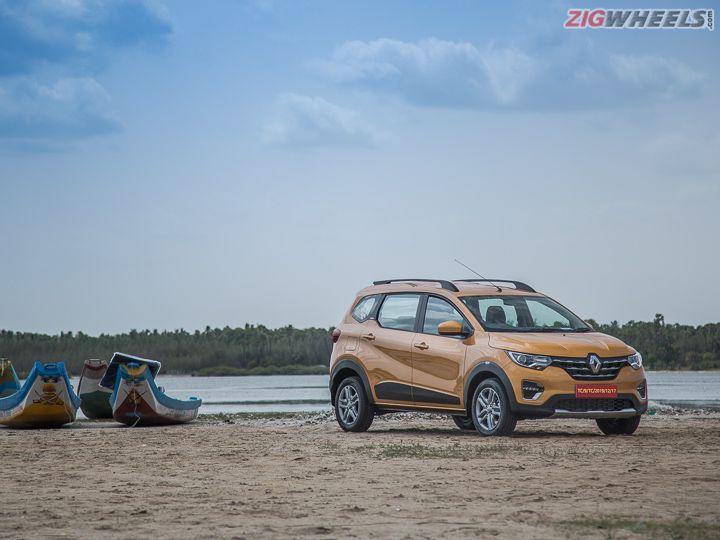 The Renault Triber is here priced from Rs 4.95 lakh to Rs 6.49 lakh (ex-showroom, India). It comes in four variants-- RXE, RXL, RXT and RXZ. The biggest trait of the MPV, however, is its modular seating option by which it can be transformed depending upon the scenario. There are 4 seating options as per Renault -- Life, Tribe, Surf and Camp mode. Here are what these modes translate to:

Starting with the most number of seats, Tribe mode is the 7-seater version with all the three rows of seats. In this mode, the Triber also offers a boot-space of 84 litres. Ingress to the third row is done by tumbling down the 40-section of the middle row seats. The larger 60-section seats behind the driver's seat cannot be tumbled down while both the sections can be reclined, slid forward and backward. The third-row also gets roof-mounted AC vents and a charging port along with hand-rests on either sides (attached to third-row body pads). One small yet significant addition is the bulge in the roofline towards to rear to increase headroom for third-row passengers.

The 5-seater Life mode is a rather interesting setup that gets a humongous and class-leading  625 litres of boot space. How? Renault has offered the Triber with EasyFix third row seats. These 50:50 seats can be folded down and removed separately from the car, resulting in the above mentioned boot-space. AC vents are mounted on the pillars for the middle row passengers while there also exists a charging port. Renault has not provided any dedicated  storage space for carrying the folded and removed third-row EasyFix seats. This means that you are left with the choice to just keep them folded or remove them prior to a journey.

As the third-row seats are split units, one can also remove one seat separately making the Triber a 6-seater. This will also open up the boot space from 84 litres in the 7-seater mode to 320 litres.

This mode offers 4 seats as one EasyFix third-row seat is removed with the larger 60-section middle-row folded down. This opens up the space in a straight line which will be ideal for carrying long items. Renault calls it Surf Mode and now you know why.

Camp Mode is the 2-seater option of the Triber. In this mode, the third-row EasyFix seats are completely removed while the second row is folded down to create an impressive storage space.

These are the four main seating options while under the hood it gets a 1.0-litre three-cylinder petrol engine with 72PS of power and 96Nm of torque. Transmission options include a 5-speed manual while an AMT will come in later.

Notable  features include an 8-inch touchscreen infotainment unit with Apple CarPlay and Android Auto compatibility, cooled storage in centre console, push-button start, and four airbags. But the Triber also misses out some important kit like automatic climate control AC, fog lamps and steering-mounted audio controls. Although the sub-4m MPV enjoys a niche status, it goes up against the Maruti Swift, Ford Figo, and the Hyundai Grand i10 Nios with respect to price.