Three Hector SUVs were spied near Vadodara Ahmedabad Expressway, giving us some more details including a new colour 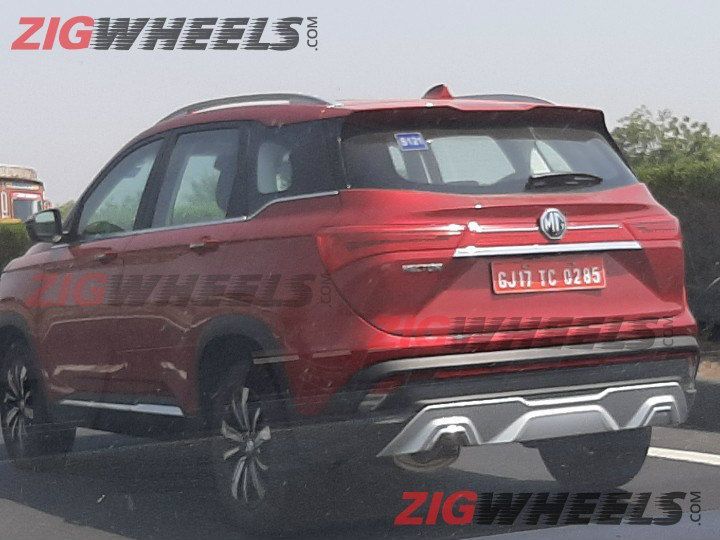 British brand MG is readying themselves for their grand foray into the Indian market with the MG Hector in June 2019. And as we are closing in on the launch date, sightings of MG’s maiden SUV for India have also increased. Spotted testing without camouflage near Vadodara Ahmedabad Expressway, we now have fresh images of three Hector SUVs.

This is the second time the Hector was spied without camouflage on Indian roads. The three Hectors spotted were wearing the shades of red, grey and dark purple/burgundy. Of these trio, we have already seen the grey and dark purple burgundy variants earlier, but the red is being spied for the first time. All the three SUVs spied seem to be the top-end variants as they seem to have generous use of chrome and are sporting dual-tone diamond cut alloys. The horizontal LED taillamps which run through the whole tailgate with the huge MG logo in the centre can be seen in the images.  No variant badging can be seen on the cars apart from the Hector badge. The lower bumper portion is encompassed by a huge aluminium skid plate setup. This also has provisions for a dual exhaust setup but, from the spied images, the right side has been plugged. Right above the skid plate is a reflector setup and clear lamps which could possibly be used as reverse lights.

The MG Hector in India will be using a Fiat-sourced 2.0-litre Multijet diesel engine producing 173PS/350Nm, similar to the Jeep Compass, along with a 6-speed manual transmission. The petrol engine will be a 1.5-litre turbocharged unit with expected figures of 143PS/250Nm. The petrol motor will also get the option of a DCT.

MG is pitching the Hector as a connected SUV with various segment-first features. It gets a 10.4-inch touchscreen infotainment system with  iSMART, an in-car Android-based tablet featuring 4G (5G ready) connectivity and OTA (over the air) updates. This enables a lot of functions in the SUV, including features like emergency calls, vehicle status, remote control for the sunroof, tailgate, door lock, and a whole lot more, which you can find out in detail here.

The Hector is expected to come with a price range of Rs 15 lakh - Rs 20 lakh (ex-showroom).  It will lock horns with the well established Jeep Compass, Tata Harrier and the Mahindra XUV500.