Mercedes Brings Something For Everyone At Geneva

Featuring a large variety of showcases, Mercedes’ stall consists of a V12 saloon, a shooting brake, an electric van and an all-electric race car! 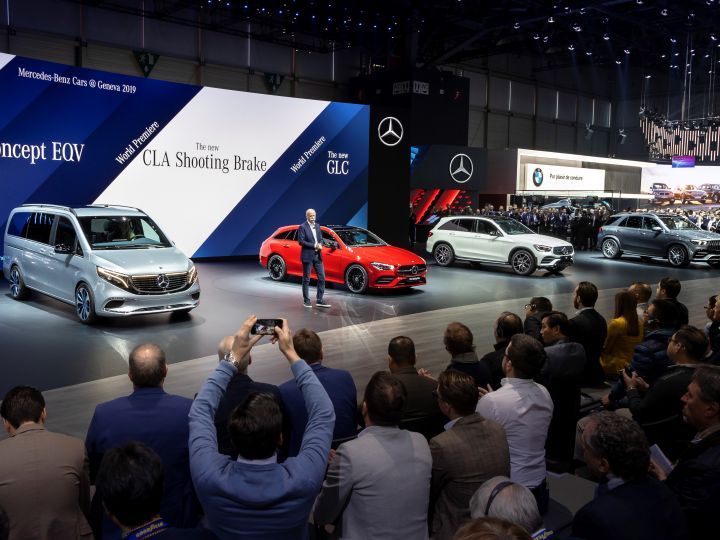 Mercedes-Benz has put up quite a show at the 2019 Geneva Motor Show. Along with the reveal of the 2019 CLA Shooting Brake, the company also used this event to showcase the last V12-powered S-Class and the all-electric version of the V-Class MPV. But if you are looking for something you can get your hands on right now, there’s also the gorgeous AMG GT R Roadster and the more family-oriented GLC facelift. Let's have a look at them in a bit more detail.

While the 2019 CLA had improved interior space than the model it replaces, seems like some people still wanted more. Welcome, the Shooting Brake. With an extended roofline, the CLA Shooting Brake offers more functionality with the same high-tech features of the new-generation car. It offers increased shoulder room and legroom for the rear passengers while adding a big-ass 505-litre boot to carry pretty much all your luggage. Inside, it retains the twin-screen setup running the MBUX system with voice commands, intelligent lighting and driver support and active safety features straight from the S-Class. The top-of-the-line CLA 250 wil come with a 2.0-litre turbocharged petrol engine with an output of 225PS/350Nm and will come mated to a seven-speed dual-clutch automatic gearbox.

The S 65 Final Edition is the last of its kind, the last of the V12 S-Class saloons to be ever made. Limited to just 130 examples, the 6.0-litre bi-turbo V12 inside produces 630PS of power and a peak torque of a massive 1000Nm. The S 56 Final edition is dressed in high-gloss obsidian black paint finish, gets 20-inch multi-spoke wheels, an AMG emblem on the C-pillar and high-gloss black tailpipes. Inside too, you get Exclusive Black Nappa leather upholstery with copper-contrasting stitching. On the centre console, the "1 of 130" badge ensures you feel special while an "AMG Edition" insert on the steering wheel make sure you remember this thing is a beast.

There wasn't much to be left desired with the AMG GT R: it already had a powerful 4.0-litre twin-turbo V8, muscle car styling, and the title ‘Beast from Green Hell'. Now, Mercedes has managed to up the ante, not by adding to the car but taking the top off. Limited to just 750 cars, the Mercedes AMG GT R Roadster is one of Mercedes' most exclusive cars and dare we say one of the best-looking ones as well. It continues to be powered by the coupe's engine and produces 585PS of power and 700Nm of torque, and comes paired to the AMG 7-speed dual-clutch transmission. Like the coupe, the Roadster also manages a 0-100kmph run in just 3.6 seconds but the top speed is restricted to a lower 317kmph, a whole 1kmph less than the GT R coupe.

Gearing up for the 2019/20 season, Mercedes’ Formula E contender has been showcased at the 2019 Geneva Motor Show. It wears a special ‘teaser livery’ for its first public appearance and looks absolutely futuristic. But because this is a race car, let’s directly jump onto the specs, shall we? The EQ Silver Arrow 01 packs a 52 kWh battery which weighs 385 kg. Combined with a high-performance motor, the car runs a 340PS tune for practice and qualifying, and a 272PS tune for the race. For those few fast-overtake manoeuvres, the car can even be switched to attack mode, in which it produces 306PS. And if the Mercedes team is the most voted one by fans for a mid-race boost (a feature of the Formula E championship), the car can for a certain period cough up upto 340PS. Top speed of the EQ Silver Arrow 01 is rated at 280kmph while the 0-100kmph acceleration is an impressive 2.8 seconds.

Making its international debut, the Concept EQV is claimed to be the world’s first luxury MPV with an all-electric powertrain. It packs a range of up to 400 kilometres and can juice up for another 100 kilometres in just 15 minutes. The V-Class was always focused on practicality and hence it retains its versatile seating setup for the rear cabin. It runs on a 150 kW motor which powers the front axle and despite its size, the Concept EQV is said to have a top speed of 160 kmph. The production-spec model will be showcased at this year’s Frankfurt International Motor Show on September 12. There is also a funky little concept which is just adorable.

Other than these showcases, Mercedes’ stand also had four special edition models: the SLC 300 Final Edition, AMG S 65 Final Edition, SL 500 Grand Edition and the CLA 200 Edition 1 Orange Art. If you are an SUV aficionado, the stage had the premiere of the GLC facelift and the GLE 53 4MATIC+, which packs a 3.0-litre inline six-cylinder engine producing 435 hp and comes mated to a 9-speed automatic gearbox.

We are reporting live from the Geneva Motor Show, so stay tuned for more updates from other manufacturers.