The EV6 marks a number of firsts for the Korean carmaker 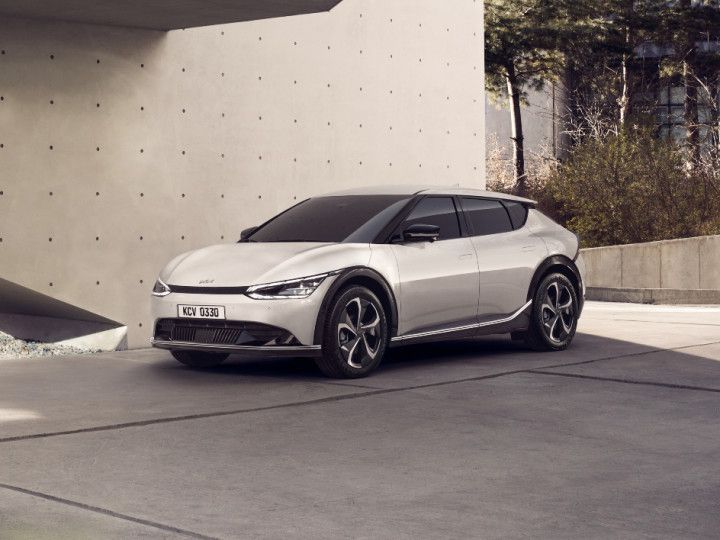 Kia has previewed the EV6 ahead of its global debut later this month. It marks a host of firsts for the Korean carmaker. It’s the first model based on Kia’s new Electric-Global Modular Platform (E-GMP); it kickstarts Kia’s ‘Plan-S’ strategy which will see seven all-electric vehicles, and it’s also the first to follow Kia’s new ‘Opposites United’ design philosophy.

The Opposites United design language, the future base for Kia cars, follows five basic principles: Bold for Nature, Joy for Reason, Power to Progres, Technology for Life, and Tension for Serenity. At first glance, the EV6’s design creates a good first impression. It looks smart with plenty of sharp lines and creases.

Kia’s trademark Tiger Nose grille has been replaced by the carmaker’s new ‘Digital Tiger Nose’, which comes with a simple and sleek design, flanked by funky LED headlamps with Audi-like DRLs. The rear-end features a sleek light bar running through the width of the boot.

Our favourite bit, though, has to be the silhouette. The sloping roofline, along with a relatively clean profile, mimics that of a Lamborghini Urus! The haunch above the rear wheels gives it a hint of aggression while the body cladding around the arches and rear bumpers look rugged. The keen-eyed will also notice the new Kia logo adorning the front and rear.

Even the interior takes cues from ze Germans! The twin-screen setup comprising the infotainment system and digital driver’s display is inspired by a Mercedes-Benz while the faux AC vents on the dashboard are Audi-esque. The controls for the infotainment system are similar to a BMW. Despite all the ermm copy pasting, Kia has fused the elements quite well. It’s also eco-friendly with the seats draped in recycled plastic.

The EV6 is capable of 500km in a single charge and the battery can be topped up in just 20 minutes (depending on the fast-charging infrastructure). The highlight, though, is the Highway Driving Pilot (HDP) level 3 autonomous driving tech.

It remains to be seen if Kia will offer the EV6 in India or not. But the carmaker has set ambitious goals for its electric journey, aiming for at least 40 percent sales from EVs, PHEVs, and HEVs by the end of 2030.