The Inline-four Kawasaki Ninja ZX-25R Has Been Launched! Guess How Much It Costs?

The bike was first unveiled at the 2019 Tokyo Motor Show 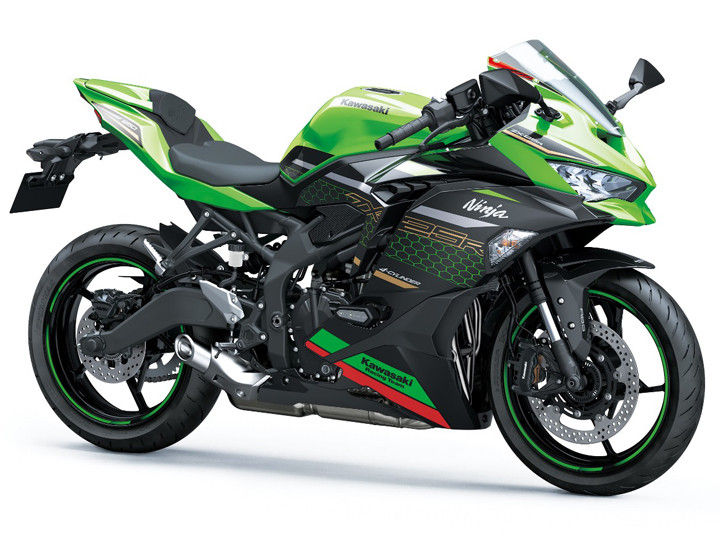 Everyone’s been raving about the ZX-25R ever since its unveiling at the 2019 Tokyo Motor Show and it’s finally here. Ok, not exactly, the Kawasaki ZX-25R has been launched in Indonesia at a starting price of IDR 96,000,000 (Rs 4.99 lakh) for the standard variant. The top-spec Special Edition variant will set you back IDR 112,900,000 (approximately Rs 5.87 lakh) on-road, that’s almost twice as much as the KTM RC 390. Then again, it’s currently the only 250cc production bike to come equipped with an inline four-cylinder motor. The supersport is available in four different liveries: lime green, white/black, blue/black and black.

Kawasaki will use Indonesia as its manufacturing hub and export the bike to other Southeast Asian countries. Don’t for a moment believe Kawasaki would bring the ZX-25R to India. It's too expensive for a price-sensitive market like ours.

We had previously expected the 249cc inline four-cylinder to make around 50-55PS, and we weren’t far off from the mark. The engine manages to dish out a respectable 51PS at 15,500rpm and 22.9Nm of torque at 14,500rpm. That makes it more powerful than the KTM RC 390 and even Kawasaki's own Ninja 400. The motor works in tandem with a 6-speed transmission. The top-spec SE model features a bi-directional quickshifter for clutchless gear shifts. A fuel tank capacity of 15-litres is pretty decent for a sportbike.

In terms of hardware, the ZX-25R uses premium separate function big piston USD forks (SFF-BP) and a horizontal back-link preload-adjustable monoshock. Anchoring the bike is a single 310mm disc clamped by a radially-mounted four-pot monobloc caliper up front and a 220mm rear disc brake. The ZX-25R SE gets dual-channel ABS. It’s 17-inch wheels come wrapped with Dunlop GPR300 radial tyres measuring in at 110/70 up front and 150/60 at the rear. The entire package weighs in at 182kg kerb, which is on the heavier side.

As for features, the ZX-25R comes with an LED headlight, tail light and a semi-digital instrument console with a tachometer that redlines at a staggering 17,000rpm. The console reads out information like estimated fuel range, traction control, power modes and features a gear position indicator and clock. The ZX-25R even gets a keyless immobiliser in case of theft.

The four-cylinder ZX-25 will surely open up new avenues for the quarter-litre segment. It’s only a matter of time before other manufacturers bring in their own offerings.