The Kona’s electric sibling will also get the mid-life refresh soon, which should make it to Indian showrooms eventually 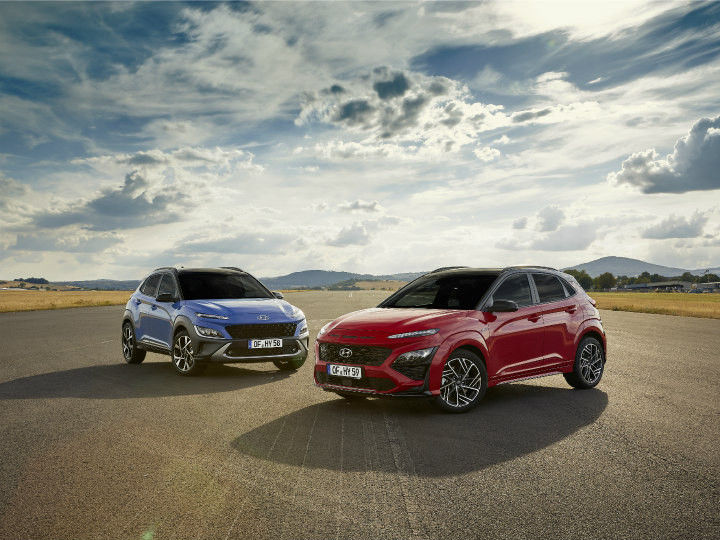 After Hyundai dropped a couple of teasers on a mid-life update to the Kona SUV, the carmaker has officially taken the wraps off the SUV. That’s not all, Hyundai has also introduced an N Line variant to the Kona for those looking a little more oomph and sportiness. It's the first update to the Kona since its global launch back in 2017, and is extensive both outside and inside.

With both Kona models following Hyundai’s Sensuous Sportiness design philosophy, it has led to an aggressively reworked exterior for the standard model and an increase in length by 40mm. While the split-headlamp setup is retained, you get an all-new front bumper, updated LED DRLs, contrast skid plates and the Hyundai logo shifted to above the grille. The side profile is relatively similar with body cladding being retained. But you do get a different set of alloy wheels available in 16-inch to 18-inch sizes. Heading over to the rear, the tail lamps have been updated and so have the rear bumper, which features matching contrast skid plates to the front end.

If the standard Kona’s aggressive design wasn’t enough, well the N Line variant takes things even further in typical N Line fashion. Up front is a different front bumper with a mesh grille design, larger air intakes  and three nostrils just above the grille. The Hyundai logo has also shifted from the top of the hood to the mesh grille. It also gets a bespoke set of 18-inch alloy wheels, a rear diffuser and a dual tip exhaust setup.

Heading inside, the updated Kona’s cabin looks relatively similar to its predecessor but gets a variety of equipment upgrades. The biggest one is the presence of a 10.25-inch digital instrument cluster that first made its debut in the new third-gen i20. The touchscreen infotainment system has also gone up in size from 7-inch to 8-inches with the option of a larger 10.25-inch infotainment system. It also gets an electric handbrake, ambient lighting and variety of new color and material upholstery options to choose from. The N Line variant retains all this plus red stitching, N Line logos and metallic pedals.

Under the hood, the Kona is powered by 1.6-litre turbo-petrol, 1.0-litre turbo-petrol and 1.6-litre diesel engines. The most powerful 1.6-litre motor makes 198PS of grunt and 265Nm of twist, is exclusively paired to a 7-speed DCT gearbox  and is available in 2WD and 4WD options. Next up is the 1.0-litre-turbo-petrol motor which can be had with a 48v mild-hybrid option. It makes 120PS in both trims and is paired to a 6-speed iMT gearbox in its mild-hybrid trim. The normal version gets a 6-speed manual and a 7-speed DCT to play with. It however is limited to a 2WD setup.

The 1.6-litre diesel mill gets the mild-hybrid system as standard and makes 136PS in both trims. It is then paired with either a 7-speed DCT or a 6-speed iMt transmission alongside 2WD and 4WD options for the DCT variants. If mild-hybrid wasn’t enough then the Kona Hybrid can cover that with a 1.6-litre petrol engine combined with a front-mounted electric motor to give 141PS and 147Nm. Paired with a 6-speed DCT and 2WD, its electric motor is juiced up by a 1.56kWh battery. The N Line variant gets all engine options aside from the 1.0-litre turbo-petrol DCT variant.

Deliveries for the two Kona SUVs will begin by the end of this year in European markets, with the Kona Hybrid following through by early 2021. Back home, we’ve got the all-electric iteration of the Kona SUV that retails from Rs 23.75 lakh to Rs 23.94 lakh (ex-showroom). Hyundai has confirmed a similar facelift to the all-electric version for the near future, which should make its way to Indian showrooms soon after.