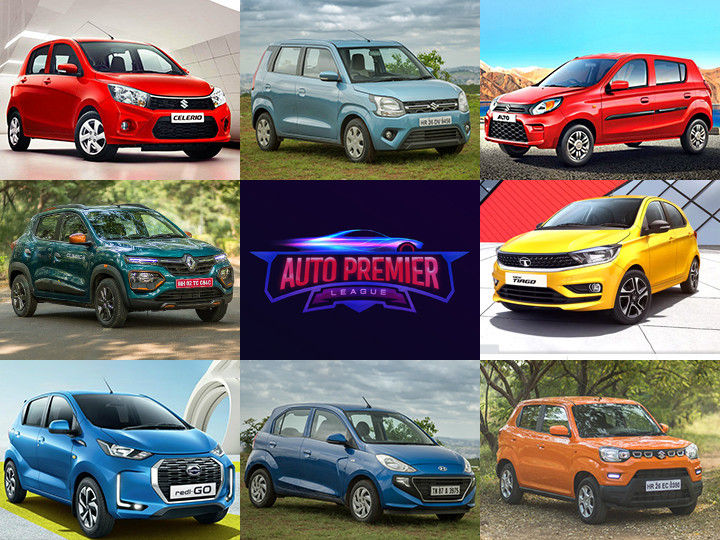 Unlike SUVs, hatchbacks have always been more of a value-for-money choice for Indians rather than a guilty pleasure. With plenty of models to choose from, hatchbacks have maintained their relevance in the Indian market. This can be attributed to the practicality and comfort they offer. Most hatchbacks today pack a big punch for their size, which makes choosing between them that much tougher. Which is the best budget hatchback? Is it an economical and reliant offering from Maruti Suzuki or a feature-packed one from Renault? What about the newer Datsun cars that have managed to cater to the expectations of the Indian consumer? Usually, we break it down for you but this time, we’ll let you decide. Introducing the Auto Premier League where your opinion counts. So here’s your chance to pick the best budget hatchback in India.

The Alto has survived the test of time over the past 15 years and continues to garner an average monthly sales figure of 10,000 units. The discontinuation of the 1000cc Alto K10 with the introduction of BS6 norms hasn’t stopped this popular car from performing well in the market. Maruti may have stuck to its roots a little too much with this one. While you can argue that the Alto in your father’s garage is just a shadow of the current version, there’s still something lacking when compared to the other models on the list. The missing AMT gearbox could have been the proverbial cherry on top.

The Kwid has seen a lot of success in its segment. The fact that it offers the cheapest AMT variant on this list may have something to do with that. To make the car affordable, Renault had to compromise somewhere. Notice the build and plastic quality at certain places? The way the Kwid looks, however, might compensate for its downsides. Renault’s entry-level hatchback is perfect as a budget car with a massive list of features including a 7-inch infotainment system and a reverse parking camera.

Tata’s budget offering, the Tiago, can easily be distinguished from its rivals with its dual-tone roof and sharp looking exterior along with a couple of pop out colour options like the new Victor Yellow on offer. If safety is your primary concern, Tata has you covered with the Tiago. The highest in segment 4-star rating from the Global NCAP that this budget hatchback boasts can be partially attributed to its extensive list of safety features.

The Celerio appeared in the Indian market in 2014 and was the first vehicle to feature an AMT transmission in the country. Since then, it has only seen a few cosmetic revisions. The Celerio is the more conventional of the two compact hatchbacks offered by Maruti. It’s the only budget Maruti hatchback on this list to feature alloy wheels and it is also the only Maruti model to not get a touchscreen infotainment system.

Ah yes, a potential fan-favourite. The WagonR, despite missing out on certain features its rivals boast, is one of the most fuel efficient and spacious compact hatchbacks currently available in the market. With the introduction of a new 1.2-litre petrol engine, the WagonR will continue to be a top preference as the budget hatchback, especially for taller people who enjoy the tall stance and boxy design.

Another icon in the country, Hyundai Santro has been an Indian favourite since 1998 and possibly the first to pose a real challenge to Maruti. The new Santro is miles ahead of the older model and the Santro takes a step ahead of the others when it comes to build quality. It is also the only car in its segment to feature rear AC vents.

The S-Presso is a budget hatchback for those who just aren't satisfied with what the Alto has to offer. The availability of an AMT gearbox and more head room give it that step ahead of the entry-level Maruti. But is it value for money? Is it worth more than an Alto considering it doesn’t have an impressive feature list?

The recently launched facelifted redi-GO is one of the most affordable hatchbacks in India. It comes with 0.8-litre and 1.0-litre petrol engines just like the Renault Kwid.