The Next-Generation Litre-class BMW Super Naked Gets A New Face!

The upcoming BMW S1000RR will feature a new bodywork, new frame and an updated motor 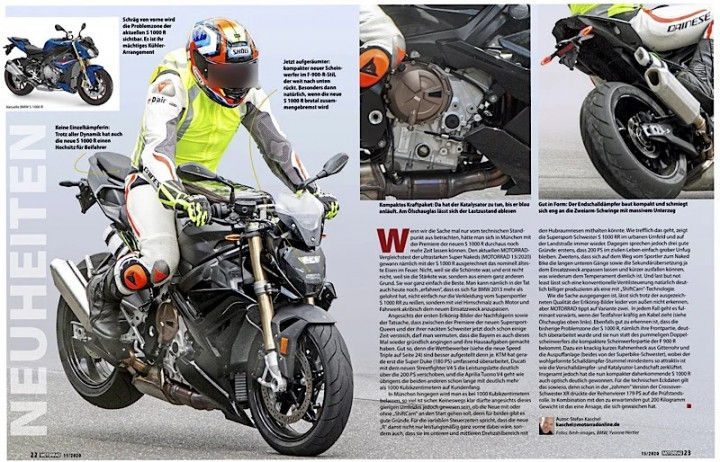 With BMW’s flagship S1000RR sportsbike receiving a generational update, it was rightly assumed that its S1000R supernaked cousin would receive the same treatment. Now images of the upcoming 2021 S1000R have surfaced online and show an all-new bodywork that appears to be a cross between the new S1000RR and the F 900 R sports naked.

Gone is the trademark asymmetrical headlamp and in its place is a slimmer LED unit with a flyscreen on top. Apart from the headlamp, the fuel tank, tail section and even the exhaust look similar to the S1000RR superbike. This points to the S1000R using the new RR’s platform as its predecessor did. It even gets the colour TFT instrument console.

The upcoming S1000RR gets the same all-new 999cc ShiftCam inline-four motor. However, we expect this motor to be tuned for better mid-range than top-end performance that’s more suited to the racetrack. While the S1000RR delivers 207PS and 113Nm, we expect the new S1000R naked to offer around 175PS.

The frame is all-new and lighter. It also gets the new underbraced swingarm that pushes the rear tyre down under load, thus ensuring maximum traction. Given that the new S1000RR is 11kg lighter than before, we expect the same lightness to be transferred to the new bike as well. BMW could equip it with lower spec but fully-adjustable suspension to keep costs low. It could also get 6-axis IMU-based rider aids like three rider modes, Dynamic Traction Control, Wheelie Control and Cornering ABS.

The next-generation BMW S1000R  is expected to be launched overseas later this year. We can expect an India launch sometime next year.