The 2020 Porsche Taycan Is The King Of 4-Door EVs At The Green Hell! 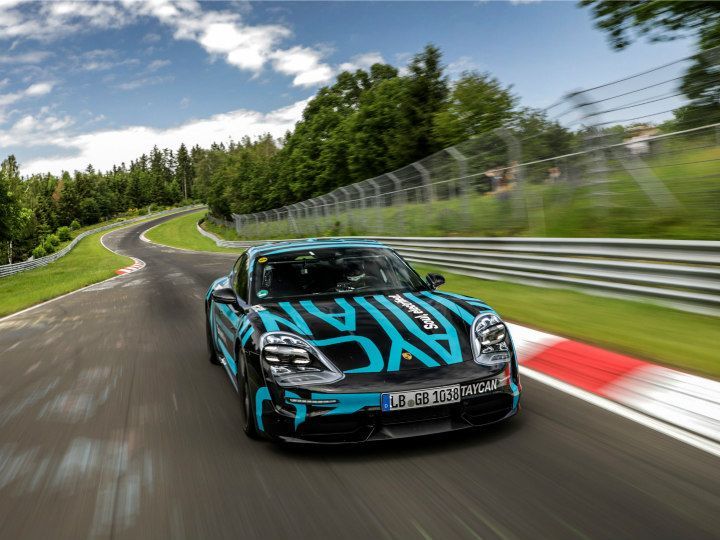 The year 2019 feels like a lap-record bargain between manufacturers, especially for EVs, at the famous Nurburgring racetrack in Germany. Earlier this year, Volkswagen’s ID.R obliterated the electric vehicle lap record with a lap time of 6:05.336. It was a whopping 40 seconds faster than the previous record set by the Nio EP9 in 2017. Porsche has decided to join in on the EV record party by laying down the four-door EV marker at the ‘Ring with its upcoming Porsche Taycan.

Here’s an onboard view of the record lap set by the Taycan around the Nurburgring:

The Taycan set a lap of 7:42 at the 20.6-km racetrack piloted by Porsche test driver Lars Kern. The lap is only four seconds slower than the Porsche Panamera Turbo (7:38s) that set its lap time back in June 2016. Porsche is no stranger to Nurburgring supremacy with the carmaker holding the outright Nurburgring record with the 919 Hybrid Evo race car. The lap time of 5:19.55 seconds was set in 2018 by Porsche motorsport driver Timo Bernhard. The Taycan’s lap doesn’t really have competition in the four-door EV segment at the moment as Tesla hasn’t set an official time with the Model S yet.

The upcoming Taycan has been in the limelight for a while now with multiple spy shots and teasers doing the rounds ahead of its world premiere on September 4. We already know that the upcoming EV is built on the J1 platform and based off the Mission E concept. It also features design cues from the Panamera and is expected to slot between the Cayenne and the Panamera.

Porsche recently dropped teaser images of the EV’s interiors and we can tell you that it gets a futuristic look with a 16.8-inch digital cluster, dual 10.9-inch touchscreen infotainment system and an 8.4-inch center console. An optional 5.9-inch display is also available to manage rear climate control as part of an optional four-zone package. Other interior highlights include a dual-element dashboard and a host of upholstery and dashboard trim options.

While Porsche has yet to reveal technical specs of the Taycan, it claims that the EV can hit  0-100kmph in 3.5 seconds and has a top speed in excess of 250kmph thanks to two electric motors. The EV’s range is expected to be around the 500km mark. It is likely to carry a 90kWh battery alongside an 800V fast-charging setup that could give it around 100km of range in just four minutes.

The Taycan will debut internationally on 4 September 2019 via livestream. The reveal will happen in three key locations: China, Canada, and Germany. It is expected to go on sale by December 2019 onwards, with 20,000 production units expected for the initial year. It could get more body styles like wagon/crossover later on too. The Taycan will also make its way to Indian shores with an expected reveal at the upcoming Auto Expo and a launch in March 2020.