New Crossover Version Of Porsche Taycan Can Go 100km In A Five-minute Charge! 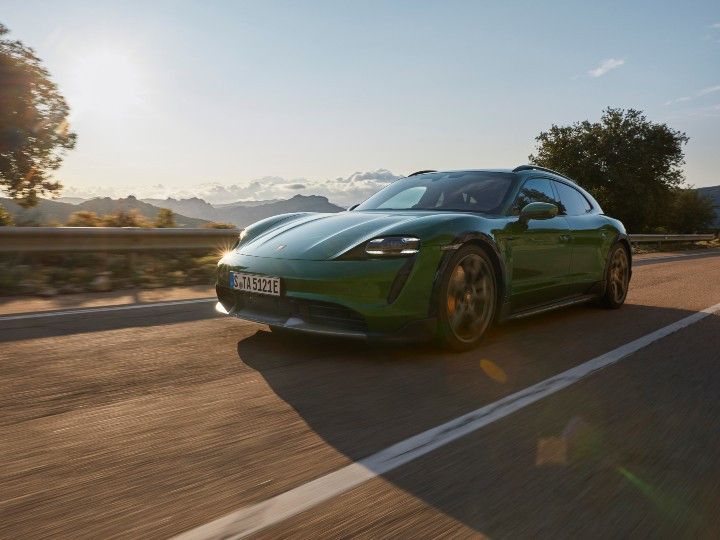 Like the sedan it is based on, the Cross Turismo is quite the looker. The sedan’s silhouette is replaced by an estate-esque roofline that gently slopes down, which Porsche likes to call ‘Flyline’. Porsche claims the crossover will get much more headroom in the back row than the Taycan sedan. It also comes with a larger boot capable of accommodating up to 1,200 litres of luggage. To add to the ruggedness, it gets blacked-out elements surrounding the wheel arches as well as the front and the rear.

While the exterior may be distinct, the interior is similar to the standard Taycan. The Cross Turismo gets a 10.9-inch touchscreen infotainment system and a free-standing curved instrument cluster. An optional passenger display can also be added, which will be combined with the infotainment to form a single unit.

An optional Off-Road Design package comes with a compass installed on the dashboard and special flaps on the corners of the bumpers to reduce stone damage. Porsche also offers optional driver assists under Functions on Demand (FoD), which can be added even after purchasing the car. It includes the Porsche Intelligent Range Manager (PIRM), Power Steering Plus, active lane keep assist, and adaptive cruise control (Porsche InnoDrive)

The Cross Turismo will feature multiple chassis systems that control the vehicle dynamics, as is synonymous with the Porsche name. The highlight is the Gravel mode, which utilises the active air suspension and raises the chassis by 30mm on mild off-road surfaces. Other systems that alter the vehicle’s dynamics according to situations include adjustable air intakes, active suspension, traction control, torque vectoring, and electronic stability control. The crossover even features automatic chassis lowering to make the car more aerodynamically efficient, resulting in range preservation. Adaptive air suspension is offered as standard across the range.

The Taycan Cross Turismo’s energy comes from an 800V battery pack with a 93.4kWh capacity. It powers two electric motors, one at the front axle and one at the rear, to provide power to all four wheels. When the vehicle is approaching a fast charging station, the cells of the battery are heated in a controlled manner to increase the speed of charging via higher currents in the form of DC. What’s more, the Taycan Cross Turismo can go 100km on just a five-minute charge! As standard, Porsche will offer an 11kW home charger, but it can be upgraded to 22kW if needed.