2020 Hyundai Creta Spied Inside Out; Launch Likely At Auto Expo 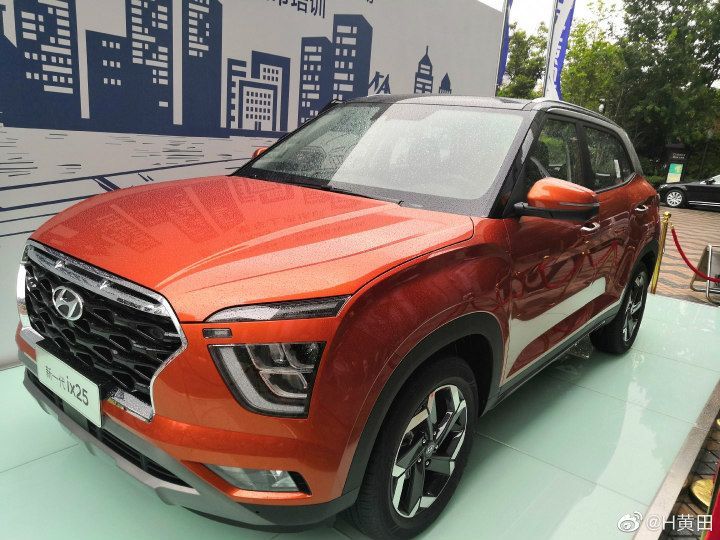 Hyundai is all-set to bring the next generation Creta SUV soon. It has already been showcased as the ix25 at the 2019 Auto Shanghai with test mules being spotted in India. And now, the upcoming SUV has been spied inside-out in China sporting an orange-black dual-tone shade.

We already know that the next-gen Creta will be based on the upcoming Kia Seltos SUV. This means it will be 30mm longer, 10mm wider and 8mm shorter than the current model. The new Creta will also have a longer wheelbase when compared to its predecessor. Although these dimensions are from the Chinese-spec model, they could be nearly identical in the India-spec Creta. It will follow the manufacturer’s latest ‘Sensuous 2.0’ design theme with a more rounded profile, a huge cascading grille and split LED headlamps and tail lamps.

On the inside, spy shots at Hyundai’s manufacturing facility in China reveal that the next-gen Creta will feature a massive vertically stacked touchscreen infotainment system. The dashboard sports a minimalistic look with the removal of buttons that include the knobs for the automatic climate control. The upcoming model also sports balck-beige upholstery in the spy shots, suggesting that there could be a variety of colour choices a la Kia Seltos.

Since it is based on the Seltos, the 2020 Creta will come with the same BS6-compliant 1.5-litre petrol and diesel engines. Both engines produce 115PS of power but the petrol unit delivers 144Nm of torque whereas the diesel develops 250Nm. While a 6-speed manual will be standard, the petrol motor could get the option of a CVT as well. The diesel variant, on the other hand, could get a conventional 6-speed torque convertor automatic like the Seltos.  A sportier 1.4-litre TGDI iteration of the Creta could also be introduced at a later date, possibly with Hyundai’s ‘N’ performance badge.

Expect the 2020 Creta to make its way to India by March 2020 with a potential debut at the 2020 Auto Expo. A seven-seater iteration is also in the pipeline to take on the likes of the upcoming Mahindra S204. The next-gen model is expected to carry a premium over its predecessor, which is priced from Rs. 10 lakh to Rs 15.67 lakh (ex-showroom Delhi). Post launch, expect the next-gen Creta to take on the likes of  the Kia Seltos, MG Hector, Tata Harrier, Nissan Kicks, Renault Captur, the upcoming Volkswagen T-Cross and the Skoda Kamiq-based SUV.