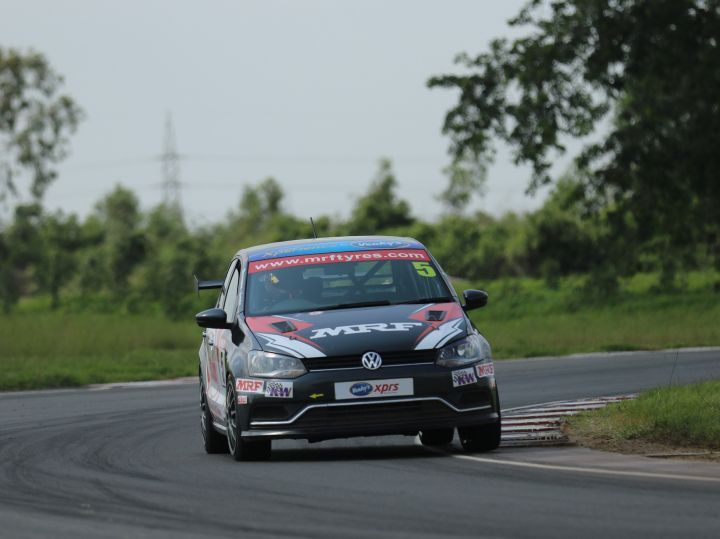 Last weekend, the 2019 Volkswagen Ameo Cup drew to a close at the Madras Motor Race Track (MMRT) in Spriperumbamdur near Chennai. With the race for the championship title getting even more closer after a rain-soaked Round 3, the top three drivers - Saurav Bandyopadhyay, Pratik Sonawane and Jeet Jhabakh - had just three more races to prove who deserved the title more. This round also saw three drivers from South Africa -- Jeffrey Kruger, Johan Pretorius and Tasmin Peper --  participate under Volkswagen Motorsport’s driver exchange program. Here’s how the weekend panned out.

The first race of the final round can be best described by the word consistency. Pole sitter Saurav Bandyopadhyay got off to a good start and maintained his lead throughout the race. The winner of the first race in the last round, Pratik Sonawane, was also on the top three for much of the race. But a mistake in the last corner of the fourth lap meant he was pushed back to fourth. Volkswagen’s exchange driver’s Tasmin and Jeffrey gave a tough fight and managed to beat Saurav and Pratik. From then onwards, the South Africans led the pack and secured the first two slots with Saurav coming in third. Apart from Pratik overcooking it on the last corner, the first race was quite uneventful.

As usual, things turned opposite thanks to the reverse grid system. As the lights went off, Anmol Singh, who started second on the grid, had a good launch and moved up to first by the end of lap one. Jeet Jhabhak, who was leading the championship table coming into this round, started ninth on the grid and by the end of lap five, he had moved up to second. Guest drivers Tasmin and Jeffrey started last on the grid. By the end of the race, Tasmin secured third while Jeffrey finished fourth.

But this race wasn’t without any incidents as just ahead of the chequered flag, Johan Pretorius crashed severely, which called for the safety car. The end result is the picture you see above.

With Pratik, Jeet and Saurav separated by a mere two points, the crowds expected a lot of drama on the track. Tasmin Pepper, Jeffery Kruger and Pratik Sonawane took the first three spots on the grid and after the lights went off, Tasmin and Jeffrey took the lead. Infact, the South Africans disappeared from the pack and maintained a comfortable 16 second lead! And Tasmin finished the race first while Jeffrey came second.

Behind them was Pratik. He was comfortably holding onto third position till lap four when Pratik, Saurav, Siddharth and Najeeb had to go wheel to wheel, causing them to lose time. This gave Jeet the opportunity to overtake them and claim the final step of the podium. With Jeet coming in a third, he beat Pratik and Saurav for the championship title by a comfortable six point lead.

Sirish Vissa, Head of Volkswagen Motorsport India, said, “Overall we had a clean race weekend. It was a tough fight between the drivers and was fun to watch the drivers fighting hard for the first National Championship title. With all the drama we had I don’t think a single person was sitting idle for any of the races this weekend”.

Jeet Jhabhak from Hyderabad claimed the 2019 Ameo Cup Championship. The 26-year-old businessman said, “I did not have the best of starts to the season, and so decided to enjoy myself rather than worry about points. I am thrilled to win the title and my thanks to the entire Volkswagen team which is like a family to me.”

A Bit About The Ameo Cup Car:

While the regular Ameo sub-4 metre sedan might have a tiny 1.0-litre MPI engine under the hood, the Ameo Cup car packs a 1.8-litre TSI engine from the Octavia which has been uprated to produce around 205PS of power.

Sirish Vissa, Head of VW Motorsport India, also added that the power and torque curve is linear in the Ameo Cup car which ensures newbies without prior racing experience can get comfortable behind the wheel after a couple of laps.

It comes mated to a 6-speed automatic transmission that can be controlled via paddle shifters behind the steering wheel. Just like the Vento, the Ameo cup car runs on race-spec springs, welded roll cage and 17-inch alloy wheels with racing slicks. Interested in one? Well, you can get one if you’ve got Rs 45 lakh under your mattress. Sadly (but rightly so), you can only use it out on a race track.