While India got the pre-facelift model, the global facelift gets minor cosmetic changes and a new diesel heart 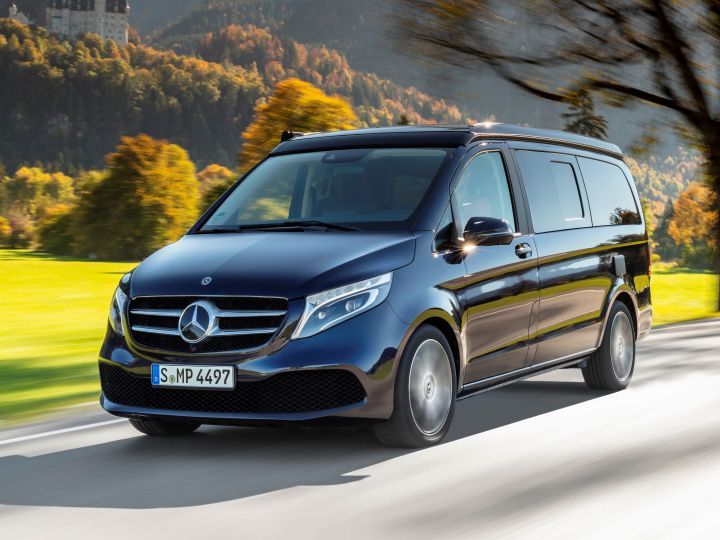 'Mercedes-Benz V-Class Launched At Rs 68.40 Lakh' was what the headline read on ZigWheels a week ago. While we are still happy about the fact that India now has a proper luxury van, even though it a 2014 model, Mercedes-Benz has gone ahead and made an international debut of the 2019 facelift. Though most of the changes are minor and cosmetic, the V-Class now gets a cleaner and more powerful diesel heart. Even on the inside, the changes are limited to upholstery options and AC vents. While it could take a while for the facelift to come to India, here is what's changed on the 2019 facelift.

On the outside, the changes to the front include a new bumper with connected air dam and mesh design net behind the grille. Other than that, the headlamps, hood and the three-pointed stars remain the same. From the side too, the only new element will be the wheel, of which you now have an option to get a 19-inch 10-spoke set which looks rather premium. At the back, there are no changes as the same tail lamps with three vertical LED elements and the same bumper continue.

Move inside and again you will struggle to find any major change. The AC vents now get the turbine-inspired design seen on some recent Mercedes models and the instrument cluster has been tweaked as well. Other than that, the dashboard layout along with the Command infotainment system remains the same. The inclusion of the new MBUX dual-screen system would have made it properly high-tech but that is probably reserved for a generation change as the V-Class is mostly about the rear cabin experience.

At the back, the rear seats are optionally available with fully reclining and back massaging seats which also feature ventilation. Other than this and a few new upholstery and customisation options, the rear cabin too remains mostly the same.

Now moving on to the biggest change of them all: the engine. The V-Class now gets a 2.0-litre, four-cylinder OM 654 diesel engine in two states of tune. The V 250 d makes 190PS of power and 440Nm torque, and the more powerful V 300 d makes 239PS of power and 500Nm torque. The latter can also deliver an additional 30Nm of torque (overtorque) while accelerating. This lets the V 300 d accelerate from 0 to 100kmph in 7.9 seconds and onto a top speed of 220kmph. Both of these options come mated to a 9G-TRONIC automatic transmission, replacing the older 7-speed auto. Also, all engine variants of the new V-Class are equipped as standard with rear-wheel drive, but 4MATIC permanent all-wheel drive is available as an option.

Safety tech too has seen an improvement with features like optional Active Brake Assist and Highbeam Assist Plus which automatically dips the headlights when necessary.

Since 2014, Mercedes has managed to sell over 2.09 lakh units of the V-Class. The 2019 facelift will be available from March 2019 in Europe with a starting price of Rs 30.08 lakh (direct conversion from 36,990 euros). Mind you, the V-Class is available in India as a CBU with a starting price of Rs 68.40 lakh, ex-showroom India. Furthermore, Mercedes-Benz will also soon launch a fully electric MPV which could be an eco-friendly alternative to the V-Class.