The Mercedes-Benz V-Class Elite Is A Luxury MPV That Costs A Whopping Rs 1.10 Crore!

The luxury MPV is available in the long wheelbase (LWB) version with a BS6-compliant 2.0-litre diesel engine 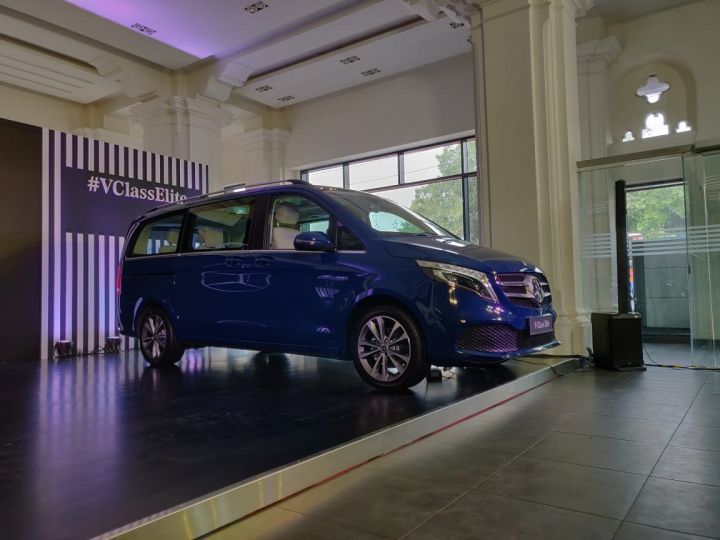 Mercedes-Benz has launched the range-topping variant of the V-Class luxury MPV in India at a price tag of Rs 1.1 crore (ex-showroom). The V-Class Elite, which marks the introduction of the facelifted V-Class that was first unveiled in February this year, is now the most expensive variant in the lineup. It also debuts Mercedes-Benz's updated 2.0-litre diesel engine that is offered globally. Here’s the detailed price list of the V-Class lineup:

As you can see, the V-Class Elite is the most expensive variant, commanding a premium of Rs 28.03 lakh over the Exclusive variant.

While the V-Class facelift looks more or less similar to the version offered earlier, a closer look reveals a couple of subtle changes. Up front, you’ll find a revised grille and bumper while  the alloys get a new design. Mercedes has left the rear end of the luxury MPV untouched.

Other features that have been carried over from the more affordable variants include the 360-degree camera, Thermotronic climate control system, Agility Control suspension, active parking assist, ambient lighting, electric sliding doors and six airbags. Like the existing Exclusive variants, the V-Class Elite gets the long wheelbase (LWB) configuration and is capable of seating six passengers.

The launch of the V-Class Elite also marks the debut of the updated BS6-compliant 2.0-litre OM654 diesel engine in the luxury MPV. The engine is offered in a single state of tune, producing 163PS of power and 380Nm of torque (same as the previous 2.1-litre diesel). But as opposed to the 7-speed automatic transmission offered in the other two variants, the V-Class Elite's 2.0-litre diesel engine comes mated to a 9G-Tronic automatic gearbox as standard. Mercedes claims that the V-Class Elite is capable of completing the 0-100kmph run in under 11.1 seconds. Mercedes has retuned the OM654 to make it approximately 8-10 per cent more efficient, matching the efficiency of the outgoing engine.

Currently, the V-Class enjoys a niche status in the country. But that will soon change with the introduction of the Toyota Vellfire next year. The existing V-Class variants -- Expression and Exclusive -- are not getting any of the updates and will continue to use the BS6-compliant 2.1-litre diesel engine mated to the 7-speed automatic gearbox. The above mentioned variants also doesn't get the interior and exterior revisions of the Elite variant, which is based on the facelifted version sold in markets abroad.

The V-Class in its Elite avatar now does more justice to its premium badging, offering a richer cabin experience for second-row occupants. But the plusher experience, new engine-gearbox combination and feature additions comes at a rather steep premium of Rs 28 lakh, pushing its price tag into 8-digit territory.