New Innova Hycross Leaked, Toyota Will Not Be Amused 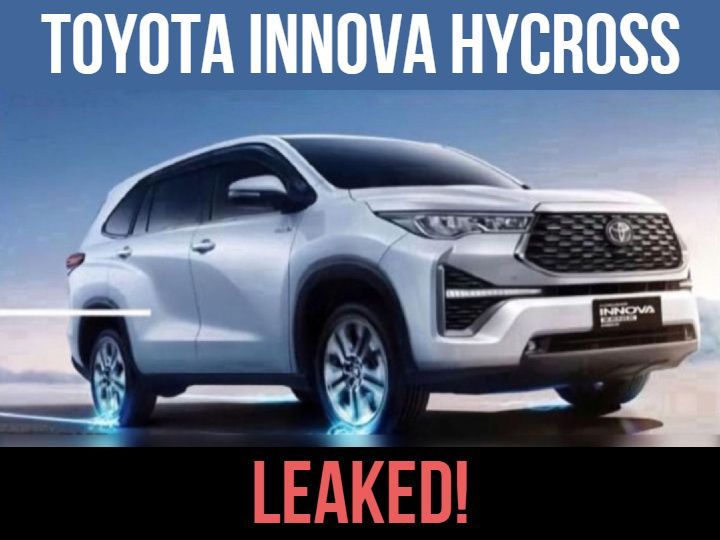 As its debut nears, the Toyota Innova Hycross has been unofficially leaked through a new image that shows its front three-quarter view. The all-new MPV is based on a monocoque platform (all previous Innovas were body-on-frame) and features more SUV-like aesthetics and design cues.

The Innova Hycross is set to be globally unveiled on November 21, post which it will be making its way to India on November 25. It’ll be a more premium alternative to the current generation Innova Crysta, as well as the Kia Carens and Mahindra Marazzo.

The new Toyota Innova Hycross gets a more aggressive styling than the current MPV, with Fortuner-esque headlights flanking a larger, trapezoidal front grille. While these cues have been revealed in previous teasers, we are seeing its massive air dams with horizontal LED DRLs for the first time among other details in full view.

We also get a better look at the MPV’s overall stance that’s a lot more SUV-like with the raised ride height, side cladding and chunky D-pillar design.

Under the bonnet, the Innova Hycross will get a new 2-litre petrol engine which will come in non-hybrid form and with strong-hybrid assist. Both power units are expected to be offered with automatic transmissions only.

The Innova Hycross will be much better equipped than the current Innova Crysta, with features such as a panoramic sunroof and likely, a 360-degree camera and larger infotainment screen. It’ll also be the first Toyota vehicle to get driver-assistance tech (ADAS), with features such as lane-keeping assist, forward collision prevention and adaptive cruise control.

The Innova Hycross is expected to be priced from Rs 20 lakh (ex-showroom) onwards. It will be on sale alongside the current Innova Crysta.