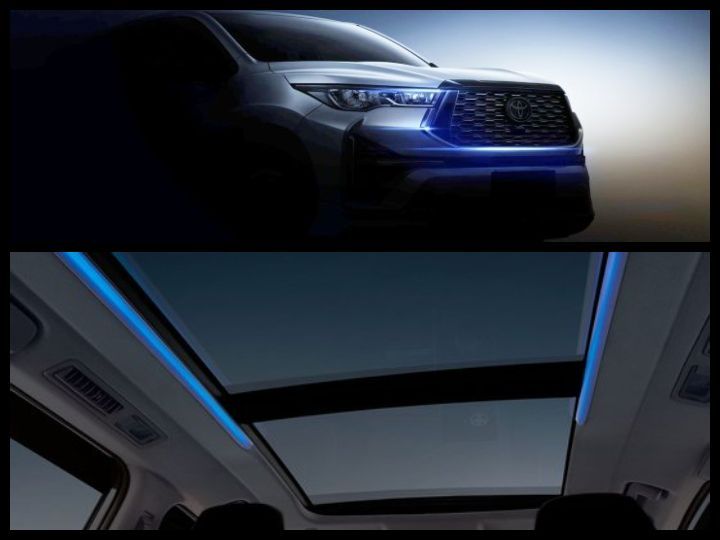 The Toyota Innova Hycross has been officially teased with one feature that’s very popular in the market currently: a panoramic sunroof. This feature is a first for the Innova nameplate, which in its next-generation avatar, is set for global debut on November 21. Post its reveal in Indonesia, the MPV will make its way to India on November 25.

Anticipates the upcoming launch of the perfect space that fits everyone's various lifestyles that will awaken your convenience and imagination.#ToyotaIndonesia pic.twitter.com/f4K8LrOAZZ

The Innova Hycross’ sunroof seems to be a large one, spanning the length of the first two rows. It’s flanked by blue streaks of ambient lighting. Also, the Hycross still gets roof-mounted AC vents, but they are now placed on the sides of the sunroof, unlike vents that are placed in front of you on the roof.

The panoramic sunroof isn’t the only new addition to the Innova nameplate, which will also get ADAS for the first time. The safety suite is expected to comprise adaptive cruise control, lane departure warning and forward collision avoidance assist. Other expected new features include ventilated front seats and a head-up display.

The list of new things for the Innova nameplate go on skin-deep. So, for the first time, the MPV will be based on a monocoque platform instead of the traditional body-on-frame chassis. It will also get a new 2-litre strong-hybrid powertrain (another debutant) developing around 190PS. A base-spec 2-litre petrol engine is also expected for a more accessible starting price.

Speaking of which, prices of the upcoming Innova Hycross are expected to be announced at the 2023 Auto Expo, and it could start from around Rs 20 lakh (ex-showroom). It’ll be a more premium alternative to the Kia Carens and Mahindra Marazzo.