These two new compact SUVs may be the same under the skin, but they have their own identities 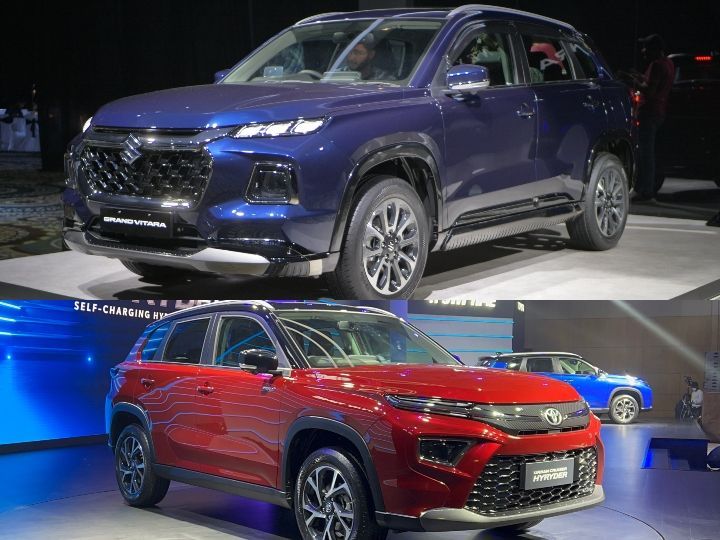 Two new compact SUV players have broken cover recently. First came the Toyota Urban Cruiser Hyryder and the 2022 Maruti Suzuki Grand Vitara followed suit. Sure, the two SUVs are based on the same platform, for they were co-developed by Maruti and Toyota, but they do have their own identity. Here’s a closer look at the differences between the two from all angles:

The most noticeable difference between the two SUVs is at the front. Starting with the Maruti Grand Vitara, you get a fairly chunky front grille, with the NEXA-style LED DRLs being a part of NEXA’s ‘Crafted Futurism’ design language. There’s also a chrome strip connecting the LED DRLs. As for the Toyota Urban Cruiser Hyryder, the air dams are a fair bit larger, reminiscent of the Glanza, with the chrome strip and LED DRLs a fair bit slimmer.

Here’s where you’d be hard-pressed to have any differences between the two SUVs as they feature identical strong character lines with body cladding adding to the rugged feel.

While the 17-inch alloy wheels on the two SUVs are dual-tone units, they get a different design. In the Grand Vitara the design looks quite familiar to the XL6’s alloys, while the Toyota counterpart sports a unique design.

At the back, the bumpers are fairly similar with the only difference being in the LED tail lamp setup. In the Maruti Grand Vitara they’re connected units, while on the Toyota Urban Cruiser Hyryder they’re split units.

The differences are even harder to notice inside with the layout as well as the soft-touch materials on the dashboard pretty much being identical in the two compact SUVs. But the Vitara’s mild-hybrid variants get a dual-tone black and bordeaux (maroon) interior theme, with the Hyryder getting an all-black finish. In the case of the strong-hybrid trims, the Vitara gets an all-black theme with champagne gold accents, while the Hyryder features a dual-tone, black and brown, theme.

Under the hood is another area where the Grand Vitara and Hyryder are identical. Their powertrain options include a 1.5-litre petrol strong-hybrid and mild-hybrid power units. The mild-hybrid engine also gets an all-wheel-drive system named ‘AllGrip Select’ with ‘Auto’, ‘Sport’, ‘Snow’ and ‘Lock’ drive modes. The strong-hybrid option will utilise a front-wheel-drive system.

Here’s a detailed look at the powertrain specifications:

Both the Maruti Suzuki Grand Vitara and Toyota Urban Cruiser Hyryder are slated to be launched in September with prices likely to start from Rs 9.5 lakh. The two SUVs will take on the likes of the  Hyundai Creta, Kia Seltos, Skoda Kushaq, VW Taigun, and MG Astor.