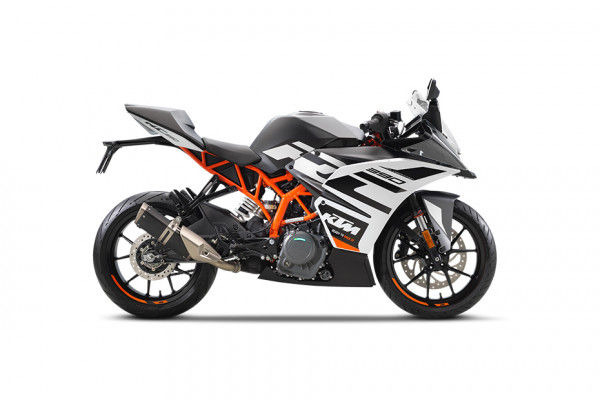 The RC 390 is powered by a BS6-compliant 373.3cc fuel-injected liquid-cooled single-cylinder engine that puts out 43.5 PS at 9000rpm and 36 Nm at 7,000 rpm. The engine comes mated to a 6-speed transmission aided by a slipper clutch. The bike’s hardware includes a trellis frame suspended on an upside-down fork and a monoshock, both from WP. Anchoring the bike is a single 320mm disc up front and a 230mm rear disc. Dual-channel ABS comes as standard. The entire package weighs in at 166.8kg (kerb).

While the overall design of the bike remains unchanged, it gets new black and white paint livery orange accents where even the wheels are painted black instead of the traditional orange shade. Despite being a 6-year old design, the RC 390 still looks modern and sharp. It’s angular design language and supersport stance still appeals to KTM enthusiasts.

On the feature front, the RC 390 comes equipped with a twin projector headlamp, LED tail light and turn signal, an all-digital instrument console that includes a clock, trip meter, odometer, and distance to empty indicator. Other notable features include an upside-down fork and a radially mounted caliper up front.

In the current scenario, the BS6 KTM RC 390 goes up against the recently updated BS6 TVS Apache RR 310 and the Kawasaki Ninja 300. The RR 310, post its update, puts up a tough fight against the RC 390. It comes with a ton of features, sports a more refined motor and gets grippier tyres, all for a premium of Rs 12,000.

The RC twins get a mid-life update, and pretty much to our delight, the 390 gets some mechanical ones too

What are the colours available in KTM RC 390?