Is the Mahindra Marazzo worth the hype? Let's take a closer look (with photos!) 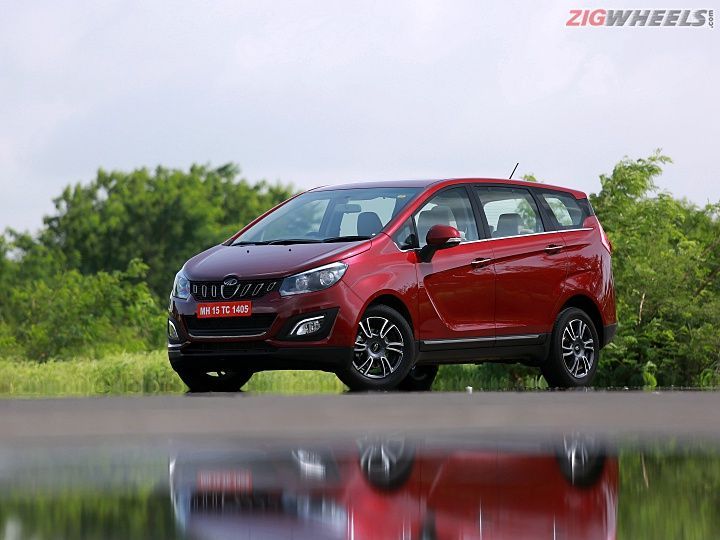 This is the Mahindra Marazzo, the company's latest attempt at cracking the MPV segment in India. Priced from Rs 9.99 lakh to Rs 13.90 lakh (introductory, ex-showroom pan-India), this 7/8-seater MPV has been designed to replicate the success of stalwarts like the Toyota Innova Crysta and the Maruti Suzuki Ertiga. Mahindra has put in a lot of effort to make that goal achievable. The Marazzo is based on an all-new platform developed using the international might of the company and promises to usher in a totally new direction for the company - of quality-made value-for-money cars.

There's no denying the fact that the Marazzo is an MPV, just look at it! But Mahindra has been clever with its design to make it look exciting, targetting private buyers rather than fleet owners.

The front end is very SUVish with an intimidating look purposefully given to make the Marazzo appealing for the SUV-loving crowd. The large dual-barrel headlamps with LED eyebrows, the 'shark-inspired' toothed grille elements, LED DRLs over the large fog lamps and judicious use of black cladding give the Marazzo a look that says 'Look At Me!' without going overboard.

Wait, the Marazzo is not based on a land-based predator...

All variants of the Marazzo get dual-barrel headlamps. The projector lamps are limited to the M6 and M8 variants.

And talking of variants, the Mahindra Marazzo gets four of them. The M2, M4, M6 and M8. All except the M8 are offered in both 7/8-seater configurations. Their introductory, ex-showroom pan-India prices are as follows:

The LED DRLs are placed on top of the fog-lamp units, while the cornering lamps are also placed alongside.

Some people have been accusing the Marazzo of looking like the older Innova when looked at from the side. Being an MPV whose main purpose is to offer as much space as possible in the given dimensions, there was very little Mahindra could do to make the Marazzo look any different. At least it's not boxy and features a more pleasing aerodynamic design.

The profile is not slab-sided in any way. The 17-inch dual-tone alloy wheels look premium.

This nice boomerang-like crease adds a bit of dynamism to the design.

Can you spot the two shark-inspired design elements here? One's the shark fin-like elements near the quarter glass and the other is the shark tail-like taillamps.

Mahindra's designers have been clever, hiding the mass at the rear of this MPV. The large taillamps, the thick chrome strip below the large windshield and the large black cladding on the bumper reduce the amount of body-coloured panels which would otherwise make the Marazzo look like any other 'boring' MPV.

Open the nicely weighted (not too heavy, not too light) doors, and you realise that even though the Marazzo is based on a ladder-frame chassis, the floor height is not too high.

What this means is that while you do have to step up into the cabin, getting in is not as much of a hassle as a Tata Hexa. It is still not as easy to get in as the Renault Lodgy, but the Marazzo brings you the best of both worlds.

Once inside, you realise that Mahindra has put in a lot of effort to make you feel rich. The design is subdued when compared to the XUV500, but even the smallest of design elements catch your eye.

The seats look comfy all around, be it the first row...

The steering wheel is not flashy in any way but gets a whole lot of functional buttons. This includes the multimedia controls, controls for the MID and..

Behind the steering wheel is the latest version of Mahindra's MID bathed in a sea of purple. The instrument cluster as a whole is neatly laid out and the display has a lot of information to show, including trip details, navigation (through the Mahindra App), fuel gauge and warnings.

The centre console houses the new 7.0-inch touchscreen infotainment system and the controls for the front climate control system.

There is no separate display for the climate control system, which means every time you make any changes to the fan speed or the temperature, the large screen space is temporarily taken up by the A/C display.

It is a crisp display otherwise and the touch response is quick too. The reverse camera display features bending guide lights, which is helpful when parking this 4.5-metre long, 1.8 metre-wide MPV.

Like the KUV100, the Marazzo also has its gear lever placed high up on the centre console, this means its easy to reach the gear lever and helps driving less tiresome in traffic.

Which is a good thing considering the comparatively small all-new 1.5-litre 4-cylinder turbo-diesel engine does not have the outright grunt to be driven around at a higher gear in traffic.

That boat power selector-like lever is the handbrake, it is as hard to operate as you imagine it be rubbing against the driver seat base when being deployed. But the design saves up space for the central storage space.

A well thought out feature at the front is the conversation mirror placed near the cabin lights, this helps you keep an eye on the passengers (imagine the car filled with your kid(s) and his/her/their friends) or if you are sitting at the back and want to ensure that the chauffeur is not dozing off.

If there is one major ergonomic flaw at the front, it is the placement of the 12v plug-point, USB points and Aux-In for the multimedia system, accessing them is not easy.

The second-row captain seats (seen here in the top-of-the-line M8) are very comfortable and offer a lot of space even when the driver/passenger seat is pushed all the way to the back.

The Marazzo is the only other MPV, apart from the Tata Hexa, to be offered with manually deployable sunshades for the 2nd row.

The party trick though is the roof-mounted A/C, which is unlike the systems on MPVs like the Innova Crysta.

These vents direct air in a concentrated manner, as the vents on any other car would.

You could also put it to 'diffuse' mode, where the long non-directional vents blow cold/warm air around the cabin for a gentler effect. This supposedly better for longer journeys.

There's only one USB slot to charge your phone here, which is a surprise considering this is an MPV.

The third row is spacious enough to fit three people abreast! The only problem here is that the armrest for the right-side passenger is limited as the plumbing for the A/C is placed on that side.

The Mahindra Marazzo can fit a couple of bags upright, even with all the seats up, but it is not as spacious as the Innova Crysta.

Folding the third-row seats do not result in a flat floor, but it is quite usable nonetheless.

How is it to drive? For an MPV based on a ladder-frame chassis, surprisingly good!

This does not mean the side-to-side movement or body roll associated with a ladder-frame chassis is completely removed, but its damn close.

How did Mahindra achieve this feat? By stiffening the body as much as possible while allowing the chassis to absorb all the road imperfections.

The only downside to this impressive drive experience? The engine. The 1.5-litre motor needs more oomph, especially lower down in the rev range. We also suspect that the Marazzo may struggle going up the ghats with a full load of people and their luggage.

So, how is the Mahindra Marazzo? First impressions are very, very positive. This should certainly rank high if you are in the market for an MPV this festive season!