For many of us this facelift of Hyundai’s flagship sedan isn’t quite an improvement in the aesthetics. But after our first drive it’s also clear that the 2019 Elantra could be worth a second look 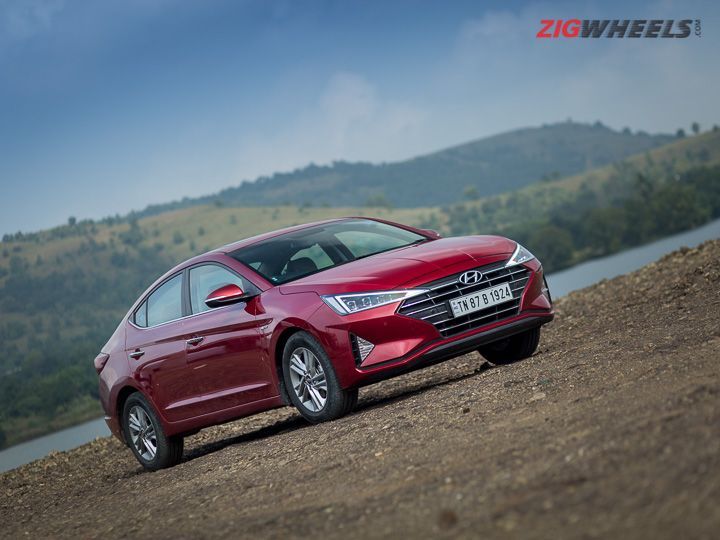 In addition to the obvious change to the face there are some interior tweaks, new features and a now-BS6-compliant 2.0-litre petrol engine under the hood. The Elantra always offered a comfortable ride, reasonable performance and handling at a price that undercuts the competition. But with this update and a price increase of nearly Rs 1.5 lakh in this top of the line SX(O) AT variant, it actually sits above the Toyota Corolla Altis while being still cheaper than both the Honda Civic and the Skoda Octavia. We find out if the changes are worth the jump in price and worth looking past that new face.

If looks could kill

It was always going to be a hard task to improve on the beautiful curves and edges of the original ‘Fluidic’ Hyundai Elantra. And while Fluidic 2.0 did bring some sophistication to the design, this 2019 facelift is, honestly a step backwards. It’s not for a lack of tasty elements, though, and the 2019 Elantra sports some nice bits like the large triangular headlamps with the large LED DRLs and quad projector elements, or the cascading grille and triangular indicators and faux fog lamps. They just don’t quite gel together as nicely as the previous generation.

In the side profile not much has changed vs the pre facelift model, save for an increase in the overall length by 50mm and the new alloy design. They are still 16-inch wheels shod with 205/60 tyres. The rear has seen more changes, with a new shape to the taillamps and the Elantra badging spelt out boldly in the centre. This has caused the number plate space to shift down to the bumper, leaving no tasteful place to hide the reversing camera so it’s displayed top centre above the Hyundai logo.

Just par for the course

The Elantra is still its elegant clean self on the inside and this update has brought just a few tweaks on the inside. Visually speaking, there is a new beige-black colour scheme to the layout vs the all black cabin from before and a new climate control unit with a different layout but with the same functionality. There’s also a new steering wheel, new chrome accents on the air con vents and a faux carbon fibre pattern on the MID surround.

When it comes to touch points the Elantra is still just fairly pleasant, with leather inserts in the doors and on the steering and gear knob but most of the plastics are all hard except the dash and door armrests. The door ones really should have been leather-adorned, though, and it feels quite odd at times, with one elbow resting on leather-covered central armrest and the other on the soft touch plastic on the door armrest. The design also quite lacks the flair of some of the cabins from Hyundai’s less premium offerings like the Venue, or even the Nios for that matter. And we’re left wanting for just a little more pampering in a car that costs over 20 lakh.

Feature loading is something that Hyundai excels in and while the outgoing Elantra was fairly well specced the new one has been now brought up to date. So the new Elantra now gets the sim-based BlueLink suite that debuted in the Venue, as well as a wireless charging module. The front seats are still ventilated while the driver's seat is 10-way power-adjustable. There’s also an 8-inch touchscreen infotainment system paired with an 8-speaker Infinity audio system that sound rather nice. Hyundai have also added in the remote boot lid opening feature that we’ve seen before in the 2017 Verna.

While the cosmetic changes and feature additions have all added value in one way or another we do wish that Hyundai had taken things a little further in some areas. The first thing is the plastics, which are mostly hard except for softer material on the top of the dashboard and the door armrests. More leather at key touch points wouldn’t have hurt the price too much but added a great deal to the feel good factor.

Next is the number of features which could easily have been automatic operations - namely the day-night function for the IRVM and the opening function of the fuel filling cap could have easily been linked with the central door locks. And while the auto boot lid function is helpful when you go shopping alone, the lack of a physical opening button on the boot itself is a frustration you may encounter in more situations.

The rear seats are also lacking a charge socket and this is a strange miss for Hyundai, which saw the sense in offering this feature in even the Nios which is quite a few rungs below. So for an executive sedan that is priced over Rs 20 lakh, there are some areas where you would certainly expect more pampering.

Under the hood is still the same 2.0-litre petrol motor that puts out a healthy 152PS@6200rpm and 192Nm@4000rpm, but now it’s BS6-compliant as well. It’s paired with either a 6-speed manual or automatic transmission. It’s still the same powerful engine it always was with plenty of torque in the midrange, so driveability in the city and on the highway is excellent. The 6-speed automatic is plenty quick and shifts are smooth with very little headnod. But we did find that it was a little eagre to shift down when you step on the throttle in the city even when you’re being gentle with it.

Though this feels like it will make it less efficient, for a big powerful petrol paired with an automatic transmission, it’s refreshingly frugal. In our efficiency tests we managed an impressive 11.17kmpl in the city and 16.28kmpl on the highway. This is also the first BS6 car that we have tested for which we have previous test figures as well, and we surprisingly found that this was both a little quicker and just a tad more efficient as well.

The Elantra also comes with 4 drive modes that include eco, normal and sport. Eco is quite nice and a great way to save fuel as it does not cut power drastically and is still quite pleasant to drive. Normal is rather self explanatory and then there’s sport. It’s great when you want a lot of performance from the engine, say on a twisty road. But true to its name, the throttle response in ’Sport’ is a little too sensitive to drive in more regular situations like cruising down the highway or pottering around in the city. The fourth mode is called smart and is a mix of the other three modes with a nice display on the MID that lets you know which mode your driving style is prompting the car to be in. It’s nice to drive around and quickly shift the engine response around to suit your driving, based on your throttle inputs.

The steering is quick and nicely weighted and it likes to dart into corners with just a little body roll. But the lack of steering feel really inhibits your ability to exploit its handling through a set of corners. Where it does a great job is in the ride quality. It stays composed over practically everything we could throw at it, with only big potholes and driving quickly over broken patches causing it any problems. All in all it’s a comfortable car, very similar to the ride quality of the Civic,a car we really loved. The Civic just does a better job controlling body roll and feels a tad more stable on the highway.

The Elantra supports quite an impressive safety package across all variants with 6 airbags, discs on all four wheel and ABS and EBD, and more as standard.

The Elantra still competes with the Civic, the Octavia and Corolla Altis. Its trump card was its pricing but this update has increased that by almost 1.5 lakh. So it now sits above the Altis and under the Civic while the Octavia L&K is roughly three lakh dearer. When compared with its rivals it still sits in a happy middle ground, being more feature-loaded than the Civic and the Corolla Altis while still significantly undercutting the more expensive Octavia.

So finally, the Elantra is still a great mix of features, comfort and performance. It may not wow you in any particular department but is still an all-rounder that deserves your consideration if you're shopping in the executive sedan space.