We find out if the updates on the Activa 5G are just cosmetic or run much deeper, and whether they’re enough to keep this best seller at the top of its game 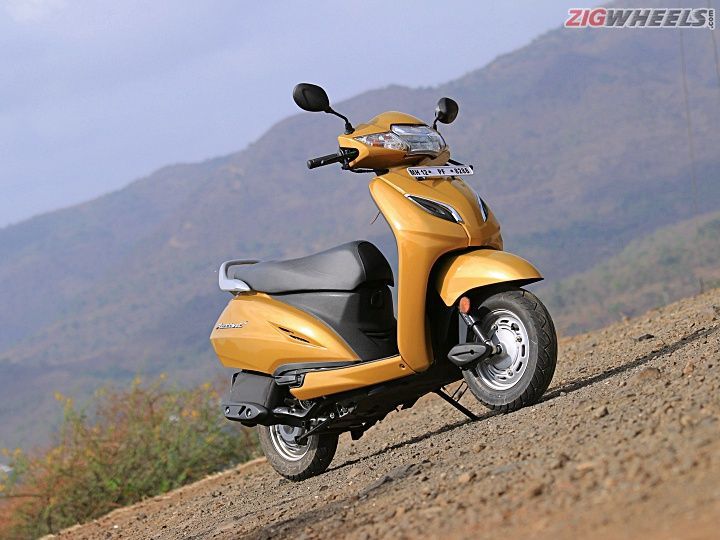 After splitting up with Kinetic, Honda entered the Indian market with the Activa brand back in the year 2000. The scooter responsible for sealing the fate of the Kinetic Honda brand also shaped Honda’s success story in India. Today the Activa brand stands as a clear favourite amongst family scooters, resulting in a whopping 51 per cent market share of the entire Indian scooter sales. To keep the cash registers ringing, Honda has launched a new version, the Activa 5G. But in a day and age where buyers have a lot more feature-packed scooters to opt from, we need to find out if the Activa 5G can still hold its own.

Without deviating much from the Activa’s basic styling DNA, Honda has put in some thoughtful add-ons to amplify the 5G’s style quotient. It still looks the same as the 4G except for the two chrome inserts on the front apron and the LED headlight. The new yellowish gold colour also looks appealing.

While the LED headlight looks classy and is quite bright with a long and wide throw, the white light itself doesn’t produce the same contrast as a traditional yellow halogen lamp. On a clear night, it’s actually quite good. But if there’s a trace of haze or dust in the air, or if it’s raining, it scatters quite a bit and feels a bit lacking. In traditional Activa fashion, the headlight comes integrated with clear-lens indicators on either side.

We had the Deluxe variant for testing, which comes with a semi-digital instrument cluster, similar to the Activa 125. The digital unit gets a trip meter, odometer, service reminder, clock and fuel indicator. There’s also an Eco light to help you keep your throttle openings in check for optimum efficiency. The switchgear quality is really up to the mark and the switches work well.

The Activa 5G gets a rear brake lock clamp that is cumbersome to operate as it requires both hands. That said, we are glad Honda hasn’t given up on this essential feature.

We also like the new textured black panels which give the scooter a premium feel. Finished in silver, the wide single-piece pillion grab rail is also carried over from the earlier model and has an easy reach. The metal side panels flaunt the Activa 5G name in chrome.

The brake light cluster with integrated indicators also remains unchanged. On the whole, it’s a scooter that will continue to appeal to a more mature crowd as Honda has played it safe by not changing the Activa’s now-familiar design. The fit-finish levels are acceptable but we did notice some panel gaps here and there. Build quality, though, feels solid.

Any change in performance?

Underneath the long and wide seat sits the same 109.19cc, air-cooled, single-cylinder engine that has been powering the last few generations of the Activa. Performance too has remained unchanged, with 8PS being generated at 7,500rpm and 9Nm at 5,500rpm. The variomatic transmission, carried over from the 4G, is a reminder of how the Activa has always been tuned to suit city hauls. As a result, 0-60kmph is achieved in 10.55 seconds (9.36 seconds on the Honda Dio).

And this choice of tuning is also reflected in the fuel efficiency numbers. The Activa 5G proved to be more fuel efficient in the city, returning 58.1kmpl. This makes it the second most fuel efficient scooter we have tested, with the most efficient being the TVS Jupiter, which returns 60.44kmpl. On the highway though, the efficiency level drops to 55kmpl, portraying its city-friendly engine character. So no real change here.

Ergonomically, the Honda Activa 5G offers a typical scooter-like seating posture i.e. upright and relaxed. Taller riders need to be aware of the handlebar hitting their knees while making sharp turns and U-turns. The pillion too sits comfortably, with an easy reach to the footpegs, which fit almost flush into the body when folded.

The seat feels plush with just the right amount of padding and should make spending hours in traffic less of a struggle.

One for the city

Being a family scooter, the Activa 5G doesn’t like being thrown into corners and shows signs of nervousness if pushed too hard. That said, it’s flickable and finding your way through traffic isn’t a concern. We were hoping to see a telescopic fork setup on the new generation Activa but Honda has stuck with the same bottom-link suspension they’ve had for the last 18 years.

Surprisingly though, unlike its siblings from the Honda stables, the front suspension has been tuned rather well to tackle our road conditions, filtering almost every bump and pothole thrown its way. Sharp bumps will be felt quite harshly through the handlebars, but won’t unsettle you or the scooter. The rear monoshock is set up on the stiffer side but with a pillion on-board, it performs equally well.

The brakes on the Activa 5G remain unchanged: 130mm drums at both ends, which slow the scooter down in a progressive manner. There is not much initial feel so you need to squeeze them fairly hard to get them to slow you down in a hurry. Under hard braking the Activa 5G stops from 60kmph in 22.57 metres, which is in the same ballpark as its competition. With a disc brake though, this could have improved significantly, with a lot more positive feel from the brakes as well.

As is the norm across Honda’s entire scooter range, the Honda Activa 5G also gets Combi Brake System (CBS), which is a boon for lesser experienced riders. The grip offered by the 90/100 section front and rear tubeless tyres, on the 10-inch wheels, under hard braking is also decent. But the grip will definitely feel a bit inadequate if you push the Activa beyond its intended purposes.

Coming to the practical bits

When you talk about scooters you can’t miss out storage and utility. As that’s the only reason which makes living with them less of a hassle. On that front, the Activa offers a decent amount of knee room and floorboard space. It’s not as much as you would get on a Jupiter though. Adding to the utility factor is the 18 litres of underseat storage. But then again it's only big enough for a half-face helmet and some knick-knacks.

A handy feature that comes in the form of an optional accessory is the mobile charging point provided in the underseat storage area. Speaking of features, newer scooters have spoilt us by adding small yet convenient features that are missed on the Activa 5G. These include bits like small storage cubbies on the front apron, external fuel lid or even an underseat storage lamp.

Priced at Rs 54,884 (ex-Delhi) for the Deluxe variant, Honda’s formula with the Activa hasn’t really strayed away from its roots. Owing to the scooter’s massive sales success, Honda is still keen on playing it safe with the Activa brand. As a result, with every upgrade, Honda has tried to give it a hint of freshness but only on the cosmetic front.

Meanwhile, the competition has improved immensely over time and are now offering great scooters that are a lot more feature-packed, better equipped and quicker even. So while the Honda Activa still comes across as a likeable family scooter, it seems to be losing its appeal, with no real change pushing it into the modern era.

In the face of competition today, it stands not as a scooter one would desire, but as a scooter, one would get out of necessity and faith in the Honda Activa brand. Probably that’s the reason why Honda would have sold 10,000 units of the Activa 5G by the time you finish reading this review.