Can this Indo-Chinese collaboration flip the urban masses over to electric? 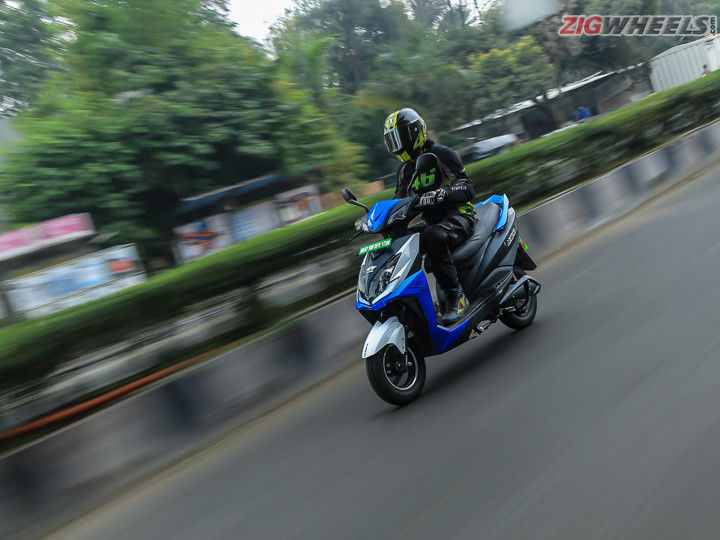 There are certain motorcycles out there that make you feel like a celebrity. When I first bought my KTM RC 390 in 2014, the sheer rarity of the motorcycle combined with its outlandish looks meant that I had a lot of questions thrown my way at every traffic light and fuel stop. I’d never thought any scooter could garner a similar reaction, but my time with the Gemopai Astrid Lite e-scooter felt like a week-long public interview. Anyone within a 5-foot radius at traffic signals and parking lots wanted to know everything about it. And it wasn’t just fascination at the unknown either - even security guards and delivery boys recognised that this was an electric scooter and wanted to know all the relevant specs. “How far will it go on a full charge?” “How much time does it take to top it up?” “What’s the top speed?”

India, then, it seems is on the verge of an electric revolution. People are well informed and aware of the existence of EVs, and curiosity is at an all-time high. When the right product makes itself available on our market, people could be flogging to the showrooms in some fairly large numbers. So, could this Rs 79,999 Gemopai Astrid Lite be that very product?

Part of the reason for all the questions is the way the Astrid looks. The minute it rolls into your vicinity, it captures your attention. That just means that it’s striking to look at, though. Whether it’s attractive or not is a whole different question. To my eyes, the proportions are a bit inconsistent - the puny 10-inch wheels and slightly skimpy overall dimensions don’t gel very well with the large (and rather unattractive) apron-mounted headlight unit. The gap from the front fender to the apron is also unreasonably large, and the unconventional tail light is a bit of an eyesore.

On the plus side, I like the 3D badges on the apron and side panels, the grab rail looks smart and the unconventional tail-lamp unit looks quite futuristic and eye-catching too. Unfortunately, while the oddball looks can be ignored once you’re astride the Astrid (pun intended), the appalling quality levels cannot. The quality of plastics used on the scooter is sub-standard, especially considering its rather exorbitant price tag. The underseat storage area, especially, feels - there’s no other word for it - cheap, and the surround for the key slot came loose to the point where there was clear daylight between it and the scooter.

Before we tell you about what this e-scooter is like to ride, let’s get the most pressing questions out of the way. In its middle-of-the-road ‘City’ mode, the Astrid managed 80km on a full charge (which is almost exactly what Gemopai claims), and once it’s out of juice, you have a couple of options. One is to leave the 1.7kWhr lithium-ion battery (erroneously 1.2kWhr on the Gemopai website) in the scooter and charge it using the port under the front of the seat. Alternatively, you can lift the 10.7kg behemoth that sits beneath a flap in the underseat storage area, and carry it to a conveniently-placed plug point. Once you plug it in, it’ll be a little over 3 and a half hours before the charging process is completed.

Credit where it’s due, the range is quite respectable and should be more than enough for most people’s daily commutes. Charging time is also quite short, especially considering that there is no fast-charging option on offer, and the flexibility in terms of charging options is definitely a positive. The weight of the battery, though not light in an absolute sense, is still far more manageable than the 18-odd kilo unit on the Revolt electric motorcycles. However, while a youngster like me living in an apartment building with an elevator can just about live with the weight of the battery, those more advanced in years or those living in a building without an elevator will find it next to impossible to carry the battery home every alternate day.

Get on board and the first impressions are a little bittersweet. The lightweight (95kg) Astrid feels utterly manageable as you lift it off its stand, but the riding position is a little odd. The reach to the bars feels natural but the high floorboard makes the scooter feel a little cramped even for my 5’8” frame. Ergonomics aren’t very well thought out either. The grips have a strange design and feel quite awkward to, erm, grip; and the switchgear is far too inset, to the point of being nearly inaccessible. Indicating or sounding the horn requires you to loosen your… grip… on the grip and displace your palm completely.

Setting off from a standstill should be a fairly straightforward and uneventful affair, especially on a scooter. Unfortunately, it isn’t quite so on the Gemopai. The first few degrees of throttle opening produce absolutely no result, making you wonder whether you’ve actually turned the scooter on or not. Twist it just a little bit further, though, and the scooter lurches forwards almost violently. This poor throttle calibration can make the scooter quite a pain (not to mention dangerous) in slow moving traffic, forcing you to recalibrate your right hand for your own safety.

The Astrid feels sprightly off the mark in Sport mode, but acceleration trails off drastically as speeds rise. You can comfortably keep pace with slow- to medium-speed traffic in the city, and you’re only left wishing for more poke when the road really opens up. This being an electric, the complete lack of vibration and noise results in a feeling of unparalleled refinement.

While the speedo showed us a top speed of 68kmph in Sport mode, our VBox showed us that the corresponding true speed was just 50.02kmph. This is a massive speedo error of 26.5 per cent, which we’d like to point out is illegal (the allowable limit is 10 per cent). On the surface of it, this might seem like an innocent mistake, but an overreading speedo also means an overreading odometer and tripmeter, which makes us feel that perhaps this is deliberate. Proof of this is borne out by the inaccurate 92km tripmeter reading during our range test.

The reason for conducting the test in City mode and not Eco is that the scooter feels nearly unusable in the latter, with top speed restricted to around 38kmph on the speedo (30kmph true speed). This can leave you moving dangerously slow in city traffic, and we recommend that you limit your use of this mode to occasions where you’re running out of charge and need to limp back home. City mode ups the top speed to 52kmph speedo/39kmph VBox, which feels just about adequate for urban commuting. Across all modes, performance dims as the battery’s charge depletes - the drop is quite small for the most part, but once the charge indicator drops to 2 bars out of 10, acceleration and top speed fall off a cliff.

For a scooter that’s built almost purely for city use, one would think that ride quality would be given prime importance. Unfortunately, the Gemopai severely disappoints in this area. There is very little suspension travel on offer, and the setup is quite stiff, which on our roads means a healthy dose of jolts to your backside. The lack of mass results in uncomfortably light handling, to the point where the scooter can feel nervous and very easily unsettled. This situation is further affected by the lack of suspension travel.

One area where the Astrid does shine, though, is braking. With a front disc nearly as large as the wheel itself, there is adequate stopping performance on offer and feel at the lever is quite sharp too. Modulation isn’t great, unfortunately. And although there is enough braking power available, actually bringing the scooter to a stop quickly can be a little tricky due to the not-so-grippy 90/100-10 Continental tyres and lack of ABS.

With a price tag bigger than most 125cc petrol scooters on the market, one would expect the Gemopai to be loaded to the brim with features. On paper, it does get an LED headlight, fully digital instrumentation, keyless ignition and USB charging. Unfortunately, the LED headlight is about as effective as taping a flashlight to your front fender. It lacks brightness and has the spread of a theatre spotlight, and to make things worse, it’s focussed off-centre, to the left. The term ‘high beam’ obviously doesn’t translate very well into Mandarin, because the high beam is actually focussed lower than the low beam on the Astrid.

The fully digital display has absolutely no frills, showing you only speed, battery charge level (no SoC percentage though), a tripmeter and an odometer. We wish there was at least a range readout, and we definitely wish the tripmeter didn’t reset every time you turn the ignition off and on. The keyless ignition and alarm system work like they should, once you eventually figure them out, which can take quite a while. The USB charging socket works like it should and is quite convenient, and the two cubbyholes on the back of the apron provide a decent amount of storage space. But silly as it may sound, range anxiety made me think twice before plugging in my phone. The underseat storage space is quite shallow due to the space occupied by the battery underneath, meaning that only half-face helmets can be accommodated here.

Let’s break down the Gemopai Astrid Lite electric scooter into two parts: the electric and the scooter. As an electric, the Astrid is actually quite commendable. It provides decent range, and charges up quickly and conveniently. As a scooter, though, it does fall short. Especially for one that demands eighty thousand of your hard-earned bucks. The lack of performance and top speed are very hard to justify at this price point, as is the lack of quality and finish levels. Throw the poor ride quality into the mix as well, and things look rather bleak for the little Gemopai.

Yes, India is gearing up for an electric revolution and our streets will be buzzing with two-wheeled silent samurais in the not-too-distant future. But I don’t think the Astrid Lite will be the one to kickstart that revolution. Let’s keep our fingers crossed for the newly-launched Chetak, then!

View All
All Upcoming Gemopai Bikes