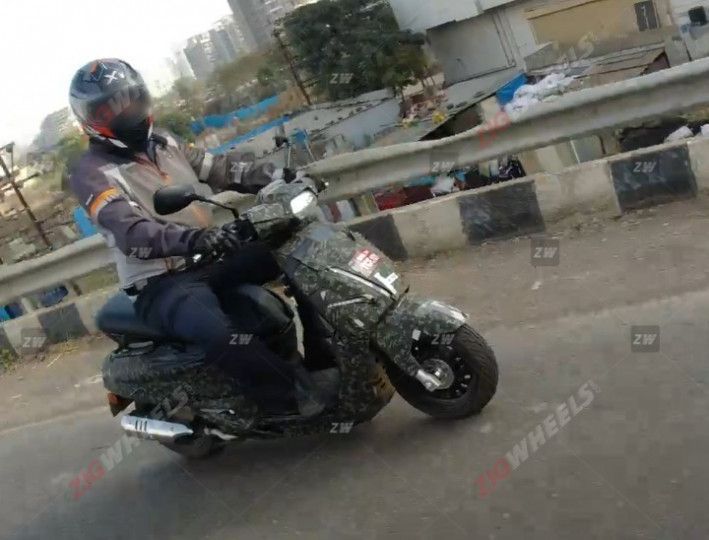 The Peugeot Django has been spotted testing on the road under camouflage. The scooter was earlier spotted back in December 2020; but this time around, it features several changes that could make it ideal for the Indian market. Here’s what we found out:

One instantly recognisable aspect of the scooter is that it gets a single-piece seat that extends out at the rear as opposed to the split seat setup in the international version. Expect the underseat storage to also be larger than the one sold abroad.

Instead of an oval headlight, the India-spec version gets a new rectangular LED set-up, which is similar to the Vespa SXL. A new instrument cluster that is more rectangular in shape can also be spotted, instead of the original circular design.

We are certain that the scooter will get a single cylinder, 125cc engine, as it is already Euro-5 compliant, and produces 11.5PS and 11.2Nm in the UK. We hope Peugeot tunes the engine to suit the Indian riding conditions.

The scooter had an MH14 number plate, which suggests the possibility of it being manufactured at Mahindra’s Chakan plant. In addition to setting up newer ones, Peugeot could make use of Mahindra two-wheeler’s existing dealerships.

The 125cc scooter segment has witnessed a major uptick in demand in the recent years, and it would bode well for Peugeot to enter India and tap this lucrative space with the upcoming Django 125. The scooter can be priced around Rs 1.4 lakh and might be launched by the end of this year. The scooter will rival the Yamaha Fascino 125, Suzuki Access 125, that are a lot less expensive, along with the Vespa SXL 125.