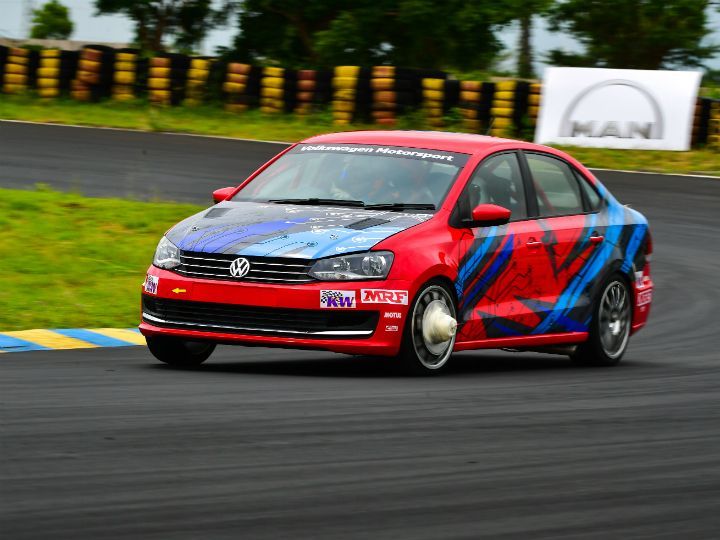 Volkswagen Motorsport can be credited with bringing country’s first one-make racing series to India with the Polo Cup back in 2010. Since then the one make series has gone through multiple transformations. The current Ameo Cup is the racing series for India’s budding racecar drivers who are looking for a platform to showcase their skills and advance to higher echelons of motor racing.

Currently,  Volkswagen Motorsport is developing a new TC4-A Vento touring car to compete in the National Championship season. VW Motorsport has tied up with Wheels India who has developed a new lightweight forged alloy wheel specifically for the race Vento. According to the company, the wheels are 60 per cent stronger, and despite being 2kg lighter are denser and provide better torsional rigidity. With the new wheels the TC4-A Vento was able to setup a benchmark time of 1.07.892 min at the Kari Motor Speedway. The TC4-A Vento is powered by the company’s revered 1.8-litre TSI engine that is mated to a 3MO sequential sport gearbox. On the occasion, VW Motorsport had this to say

Speaking on the partnership with Wheels India, Mr. Sirish Vissa, Head of Volkswagen Motorsport India said, “Our race machines are constantly evolving and team is always looking for ways to improve the dynamics of our race cars. The addition of the forged wheel has had a considerable impact on weight savings and this in turn has been a major performance upgrade. With further calibration we expect to improve performance in the future.” Mr. Vissa further added, “It’s a great step by Wheels India to develop and manufacture high performance and robust forged alloy wheels in India that match the performance and safety standards required for motorsports. Since 2010, we have imported wheels from UK and Germany and now we finally have a local supplier that develops high quality standard wheels for motorsports.”

On the development of the forged alloy wheel, Mr. Shriram Vijayaraghavan, SVP, Wheels India said, “The wheels have gone through extensive development both in the laboratory and on the race track. The laboratory simulated the load conditions on the wheels when driven on these race tracks. We have collected and analysed data from the

wheel and optimized it to meet the performance requirements of the racing car.”

The Volkswagen Motorsport team validated the result achieved on the test bench by running the car on the track with a wheel instrumented with load measurement and telemetry, so the data can be logged in real time and in real world conditions. The team achieved an excellent correlation between real world conditions and the test and simulation data.

About Wheel India Limited: Wheels India Limited is is a leading manufacturer of steel wheels for passenger cars, utility vehicles, trucks, buses, agricultural tractors and construction equipment. The Company has manufacturing plants at Padi, Pune, Rampur, Sriperumbudur and Pant Nagar with a combined overall annual capacity of 10 million wheels. Wheels India has a diversified customer base with over 40 customers globally. Over 50% of the Company’s business accrues from the manufacture of Automotive wheels for cars, commercial vehicles and agricultural tractors while the balance comes from wheels/components for Construction & Mining Equipment, Air Suspension for Commercial Vehicles and Components for Energy Equipment