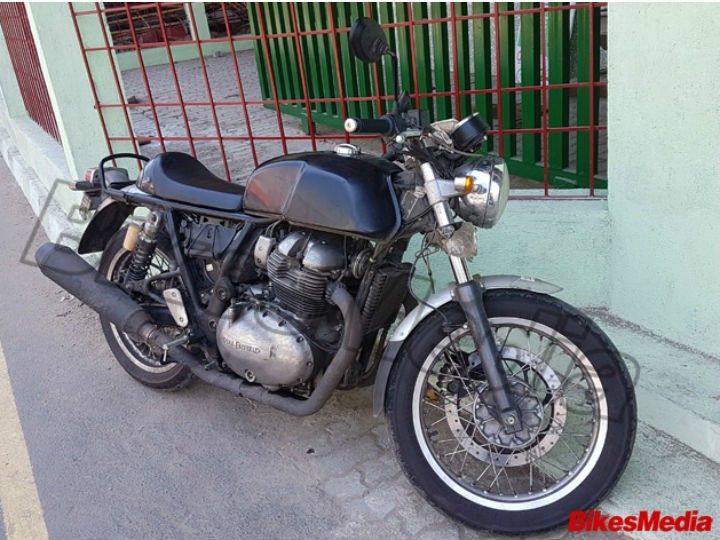 The heavily anticipated 750cc motorcycle from cult bikemaker Royal Enfield has been spied again in India. The bike was spotted in Chennai and the shots reveal some interesting details. For starters, the bike uses the Continental GT’s chassis and a parallel twin oil-cooled engine. Fuel is fed to the engine by fuel injectors. Unlike the Continental GT, this engine comes with finned header rings to dissipate heat coming from the exhausts. The engine is likely to be a 750cc unit and it is speculated that it will incorporate a 270-degree firing order. It would make sense as that firing degree offers the best balance between refinement and power delivery. It is expected that the engine will produce around 60Nm of torque. The oil radiator is nestled on the downtube of the double-cradle frame. The clutch assembly is on the right and the drive chain is on the left, a la Himalayan. The gearbox casing design is reminiscent of the older Royal Enfields. The megaphone-style twin exhausts are completely draped in matte black. Also read: 5 Best Touring Bikes Under Rs 2 Lakh

The thick handlebar clamp holds Clubman bars which should offer a relatively more relaxed riding position than the Continental GT. The chrome-ringed twin-pod cluster sports legible readings and there’s a digital inset as well. Switchgear has been borrowed from the current generation Royal Enfields. The bike sports telescopic forks at the front while the rear has gas-charged shock absorbers. Unlike the Continental GT, the gas reservoirs in the shock absorbers are at the top. The bike is likely to be equipped with twin-channel ABS and the wheels are wrapped with Pirellis, likely a 120-section unit at the front and 160-section rear. The rear tail lamp and the indicators are all in line, giving the bike a proper retro look.

It is expected that Royal Enfield might showcase this motorcycle at the 2017 EICMA show while the launch might happen at the 2018 India Auto Expo. The speculated pricing is between Rs 3.5 – 4 lakhs, ex-showroom. Once launched, the motorcycle will lock horns with Harley-Davidson Street 750, which currently rules the entry-level premium bike segment.