Can the smallest and most affordable Tiger live up to the family name? 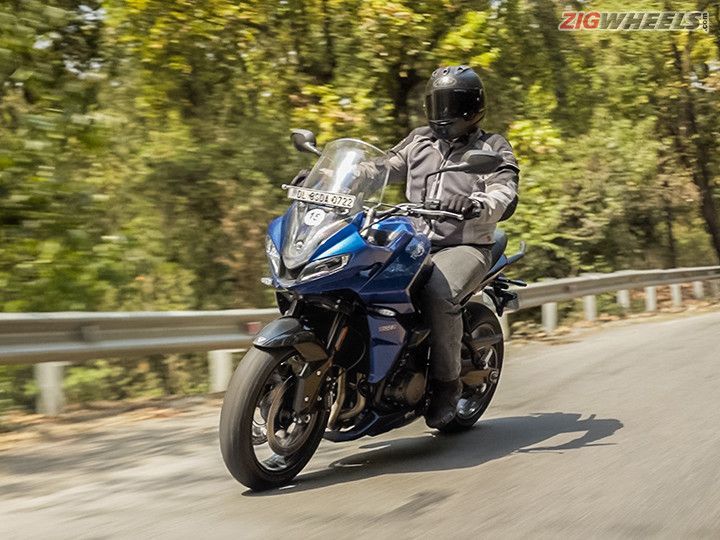 Just like they did with the Trident, Triumph has applied the formula of bringing more accessible motorcycles to their most sought after family in India, the Tiger.  This Tiger cub is packing the smallest heart, the 660cc motor borrowed from the Trident, and the most affordable price tag, which bring a new kind of excitement to the family. As the Sport in its name suggests, the Tiger Sport 660 isn’t off-road  oriented.  So, what kind of a Tiger is it then, and is it a Tiger at all?

It certainly doesn’t look like a Tiger. I was puzzled by the Sport 660’s design DNA since its unveil, but when I saw it in the flesh in Dehradun, the connection to the Yamaha Tracer and Fazer seemed obvious. It is something to do with the upright fairing and slim headlamps. One thing is for sure,  it won’t remind you of the Trident. Whereas the Trident has a slightly retro vibe, the Tiger Sport is ultra-modern and sharply sculpted. Nothing is shared, and the Tiger Sport has a half-fairing, an on-the-go adjustable windscreen and a larger 17.2 litre fuel tank too.

There are changes beneath the surface too. The rear subframe is longer to make more space for the pillion, although I think it’s still too small for long journeys. A longer swingarm has resulted in a wheelbase that is longer than the Trident, and the Versys 650. As a result of all this, the Tiger looks bigger than the Trident, but it isn’t bulky. To give it substance as a tourer you get neatly integrated luggage mounts, so you don't need additional frames so long as you get the compatible luggage. It's only from this angle that the tail lamp makes the Trident connection very obvious, isn't it?

The Tiger Sport we rode was accessorised with frame sliders, a belly pan, a tank protector and an under-seat USB socket, all of which will bump up the price further. The Bluetooth connectivity module is  a handy extra as it lets you receive navigation directions on the instrument cluster via the Triumph app. Aside from this you can also respond to calls or control the music via the switchgear on the left. This feels like a helpful extra that assists this Triumph in making the transition from a naked to a tourer.

Key to Triumph's promise of bringing something special to this market is the triple-cylinder engine.

The Sport’s rivals like the Kawasaki Versys 650 and the Suzuki V-Strom 650 are twins, parallel and vee, respectively. The extra cylinder gives the Triumph more revs, more performance and more smoothness.

This makes the Tiger super easy to ride, letting you leave it in 5th gear even at city speeds! It will pull from 30kmph calmly. But, unlike the newer updated 765 motor,  which packs a lot of grunt at low revs, the Trident still feels a bit soft when you open the throttle at low speeds. When you consider that riders are likely to be travelling with a pillion, luggage, or both while climbing mountains, the added grunt would be very handy.  This also means you would have to work the gearbox for urgent getaways, but that’s no chore as the gearbox is smooth and the clutch light.

But there is a catch. This detuned engine delivers 81 of the original 100 horses, and as we found on the Street Triple 765 S too, this results in a gruff and buzzy nature on the Sport too. When you demand torque the engine chatters a bit and at higher revs the tingle is felt clearly at the bars and the pegs. Which means high speeds touring stints won't be as smooth and relaxed as you would have hoped from this Triumph. What it adds up to is a motorcycle that is pretty nice to ride below 5500rpm. Its buzzy and noisy nature is no surprise, even the Trident is similar; but while this nature was passable on a naked, on a tourer it feels very amiss.

Tourer, but what kind?

To go from being a Trident to a Tiger Sport the Showa upside down forks get 150mm of travel, and so does the rear monoshock. This is more than the Trident and even the ground clearance looks more, but not by much. Triumph hasn't stated this figure, hence we’ll have to leave it ambiguous.

If you were hoping to go flying down dirt roads on the Tiger Sport, I would say, tread carefully, because of a couple of reasons. Firstly, you’ve got alloy wheels, with a 17” front wheel. Second, the tyres are the finest from Michelin, but as their name suggests - Road 5 - they are meant for the road.

Lastly, and most crucially, the suspension lets the Sport down big time. Even the Trident felt crude and wooden in the way it dealt with Indian roads, but the taller stance makes these shortcomings even more obvious. So, the Tiger Sport travels well over smooth tarmac, but anything that's out of the ordinary - even a small bump at speed can feel jarring. So this suspension does feel a bit basic, horribly so when you consider the price.

Not an adventure tourer then…

So what if it can’t rough road? Just so long as it's got the long-legged ability to gobble up highway miles, right? On the highway, you’ll find that getting up to triple digits speeds you will need to rev the motor hard. This change of pace involves getting used to the buzzy nature of the engine at high revs. But, once you get there you’ll realise that you can cover distances quickly but it just doesn't feel relaxing. Sure, the ergonomics are comfy and the Sport will feel roomy even for taller riders; however, the firm suspension plays spoilsport once again and keeps you from zenning out. The bike never quite settles even while cruising and so you end up bobbing around a bit. So you could say it isn’t an adventure tourer, it's a sport-tourer.

First, let's talk about everyday practicality. The Sport’s 835mm seat height may seem daunting, especially when compared to the Trident. Surprisingly, the Tiger Sport 850 has a seat that can be adjusted from 810mm -830mm. At 5’6” I was tiptoeing, and as a result over looser surfaces, I did wish I had the low seat option which drops the seat by 25mm. Surprisingly, the 208kg kerb weight feels pretty manageable. On the move, the Trident feels easy to steer - light and precise. Because of this, it feels like a motorcycle you could ride every day. The only possible issue with its commuting role in the city is the heat from the engine that could be felt on the legs. But, we will check that when we test it in the familiarity of Pune.

Compared to the Trident, Triumph has tweaked the chassis, giving it a sharper rake and shorter trail to make it responsive to steer despite the added weight and change in its stance, the Tiger Sport feels nimble. At high speeds too the Tiger feels connected and precise; it turns quickly and leans hard into corners. The fun lasts just as long as you are riding on well-surfaced winding roads. What lets it down as a tourer lets it down here as well, as the motorcycle feels quite reactive over bumps in corners.

While the bite from the Nissin brakes is good, you’ll find that the motorcycle starts to feel loose when you brake into corners. This is down to the way the ABS lets the rear wheel lock up and slide before correcting things. This heightens the sense of caution required if you ride it fast. So, inherently, the Tiger Sport prefers to be ridden in a slightly laid back fashion, which would be fine for beginners.

So the Tiger Sport is a great beginner bike - but it has three problems on its hands. The first is its suspension, which misses the ability to soak up Indian roads, a factor crucial for tourers. The second is the competition. The Kawasaki Versys 650 which is nearly two lakh Rupees cheaper and a comfy highway mile muncher. The second is Suzuki’s V-Strom 650 that tours well and rough roads very well, and would get to places that the Tiger Sport would not. This Triumph cub’s wooden suspension and buzzy engine limit its ability and potency as a touring machine. So, riders with some experience will grow out of this fairly soon. And, the last chink in this Tiger Sport’s promise is its price. When you consider that the Street Triple R, a more potent and a much better equipped street motorcycle (fully adjustable suspension, quick shifter, more power to name a few things) costs almost the same as the Sport, it seems that this Tiger is lacking not just in ability but value too.