Bookings are already open. Will be powered by Tata's new BSVI-ready diesel engine 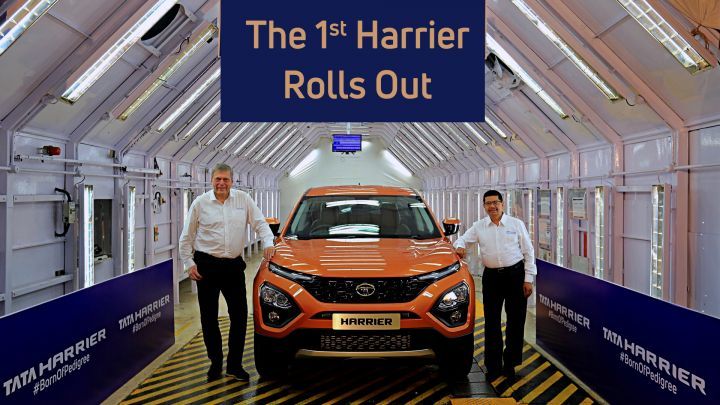 Tata has officially revealed the production version of its upcoming Harrier SUV. Tata’s flagship SUV has rolled out of a new assembly line that was specifically developed and constructed for the Harrier. Bookings for the SUV are already underway. Aesthetically, it looks almost identical to the H5X concept that was showcased at the 2018 Auto Expo. The only difference we can see is that the impractical and show-y bits have been replaced with more practical choices.

The Harrier looks imposing with a muscular front end which is further accentuated by the sleek LED DRLs that sit where the headlamps should have been. The headlamps, on the other hand, have been shifted to the bumper. They feature projector headlamps, though we cannot say for sure if they are HID lamps or LED projectors. They are placed in a slight crevice inside the bumper, possibly to make them less susceptible to damage. Just below the headlamps sit fog lamps in the same bumper housing. The grille is sleek and features a similar pattern as the Nexon. The front fascia is also in tune with Tata’s Impact 2.0 design philosophy with the Tata’s ‘Humanity Line’ firmly in place. In profile, it looks butch and imposing. The roofline slopes ever so slightly towards the rear. However, we are sure this will not compromise on headroom in anyway.

The wheel arches flare outwards and the black cladding all round gives the SUV a purposeful look while the shoulder line neatly blends into the Harrier’s tail lamps. The rear, too, looks striking and contemporary. The tailgate is rather large but the loading lip will be at a comfortable height. The rear windscreen is narrow and is complemented by a glossy black insert that runs the width of the tailgate and merges with the tail lamps. The tail lamps, on the other hand, are sleek, wraparound units that spill over onto the tailgate to meet the black insert. They feature LED strips above which sit the turn indicators. And at the spillover point, the tail lamps fade into the black strip giving it a blacked out appearance. The car sits on 5-spoke alloy wheels which don’t gel completely with the overall design. Maybe a set of black alloys would’ve helped Tata enhance the Harrier’s overall appeal, but that’s just our opinion. It will be powered by a Tata’s new BSVI-ready 2.0-litre diesel engine.

In terms of kit, the Harrier seems to be loaded as far as we can see. The headlamps will be projector units and could likely have self-levelling ability as well. It is likely to feature cornering lamps as well. Automatic headlamps, too, will be a part of the kit along with rain-sensing wipers and auto-folding ORVMs. At the rear, it gets parking sensors along with a rear parking camera. The rear windscreen gets wash/wipe along with a defogger. Also, since it is based on the Land Rover D8, or Omega platform as Tata calls it, it is bound to have some serious off-road capability. That makes hill descent control, hill start assist, ESP and a locking differential, quintessential additions. Sadly, Tata has skimped on a sunroof on what looks like the top-spec variant of the Harrier and it seems like a glaring omission as the concept car sported a panoramic unit.

When launched, the Harrier will lock its sights on the top-spec Hyundai Creta and the base to middle variants of the Jeep Compass.

We will be getting behind the wheel of the Harrier very soon and we are releasing our sleuths into the wild to scour for more information as you read this. So stay tuned to Zigwheels for more info on the Harrier. In the meantime, do let us know what you think of the finished product in the comments below.